Rudra Veena exponent Ustad Asad Ali Khan passes away - In his memory: a recording from a concert in Darmstadt, Germany in 1995 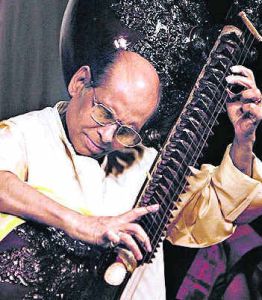 Rudra Veena exponent Ustad Asad Ali Khan, one of the last existing advocate of the Khandarbani dhrupad school, passed away in the wee hours here today.
He was 74.
The classical musician, who represents the 12 generation of Jaipur's Beenkar Gharana, breathed his last at the All India Institute of Medical Science at around 2:30 am, his adopted son and disciple Ustad Ali Zaki Haidar told PTI.
"I had taken Ustad ji to hospital in the evening for a routine check-up and he was admitted around 7 pm. They conducted routine tests. Around 2:00 am while he was watching TV in his air-conditioned room, I noticed he was sweating. He passed away a little later," Haidar said.
Ustad Khan who was unmarried is survived by his nephew Haidar whom he had adopted as his own son at a very young age and trained to become his successor, said Pawan Monga, a disciple of the Rudra Veena exponent.
The musician, who received the Padma Bhushan in 2008 underwent training under his father Ustad Sadiq Ali Khan Beenakar. His father, grandfather Ustad Musharraf Ali Khan Beenakar and great-grandfather Ustad Rajab Ali Beenakar were court musicians in the princely state of Alwar where Ustad Asad Ali Khan was born in 1937.
His father later moved to the princely court of Rampur where he undertook to teach him music. For the next 15 years he learnt to play Rudra Veena, practicing 14 hours a day.
Ustad Khan was a artiste of the All India Radio and participated in 'sangeet samelans' and musical performances across the country and the world. He has also performed at concerts in Afghanistan, Australia, Holland, Italy, New Zealand, the United Kingdom, the US and other countries.
Ustad Khan has also been a professor of music at Delhi University.
Rudra Veena, an instrument said to be created by Lord Shiva, has remained essentially unchanged for millennia.
It comprises a bamboo piece mounted on two gourds and has 19-24 frets fixed with beeswax with four main and three side strings having a range of four to four and half octaves. Unlike a sitar or sarod, the rudra veena does not have resonance strings.
Ustad Khan used to play dhrupad in tile Khandarbani style, which is one of the four ancient styles of Indian music. It is named after Khanda, the Rajput warrior's traditional sharp curved sword.
from: http://www.dnaindia.com/india/report_rudra-veena-exponent-ustad-asad-ali-khan-passes-away_1554898


As a tribute to him we present here a concert in Darmstadt, Germany, from 1995. Our friend KF recorded it from its broadcast in february 1996, made a CD out of it and created nice covers. Many thanks to him. 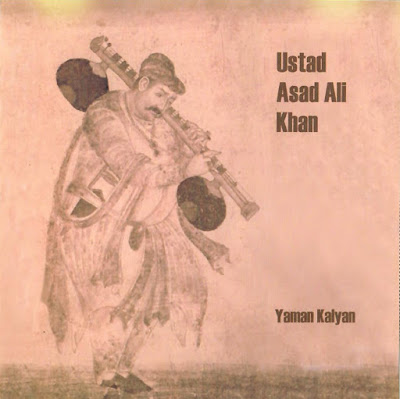 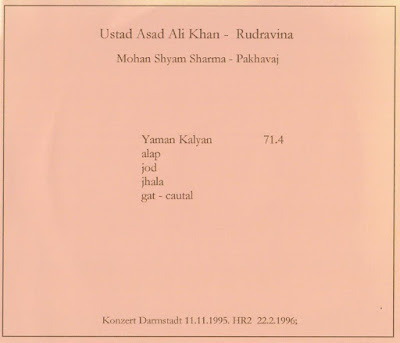 See also the recent post by our dear friend Bolingo of the only LP by the Ustad:
http://bolingo69.blogspot.com/2011/06/ustad-asad-ali-khan-rudra-vina-p1978.html
Posted by Tawfiq at 22:46

May he rest in peace, Rahmatullah aleihi! Thank you for sharing his concert, I am sure it will be one more gem from your precious necklace!

Thank you very much Tawfiq!

As always I am very happy to listen to the fuller format that concerts allow.
May the extended sounds of Asad Ali Khan resonate for ever...
Barrak Allah hu fiik!

That said I also recommend what he had to say about religions and music here:

I find that quote to be something very important to keep in mind!

Thanks a lot for sharing his music in remembrance.

Actually this rendering of Yaman is close to perfection!

Thank you very much,Parag, for this exemplary Desh. Ustadji is singing like an hummingbird! May we know the recording date?

Thank you very much for the Desh Parag! Very kind of you to share it. Do you happen know when it was recorded?

Dear Parag,
thank you sooooooooooooooo much for the beautiful recording.

Could you upload again please ?

You are a blessing to humanity!!! Incomparable job uploading all of this!!

Thanks for sharing these treasures.