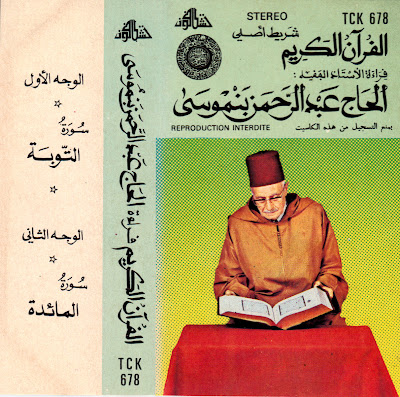 We post here one more cassette by Al-Haj Abd er-Rahman ben Moussa with beautiful Quran recitations, based on so-called "Andalusian" melodies, a style which has almost completely disappeared.
Before we had already published Vol. 1 and Vol. 60 of a complete Quran on 60 cassettes and five cassettes from this series (see here).  Originally we wanted to post this cassette already in february 2013, but abstained from it because this tape has unfortunately some weaknesses: the sound is partly muffled, especially on side 1 up to 11:05. Now on the occasion of the blessed month of Ramadan we finally decided to post it.

Haj Abd er-Rahman ben Moussa was very well known in Morocco as he used to recite the Quran on Moroccan TV and radio for decades.
This volume is from a series of 8 cassettes. Some volumes were given to me as a gift by some Moroccan friends, some I bought in the late eighties in Brussels. There is also a complete Qur'an on 60 cassettes by him, of which we have posted already the first and last volumes and which I bought in the early or mid nineties, also in Brussels. I don't remember what inspired me in the beginning to look for recordings by him, but I did for many years. Two or three years ago one could still not find anything about him in the internet, but now there are a couple of sites from which one can download his recitations. As this style has more or less completely disappeared, now there seem to be people who feel the loss and are eager to get hold of his recordings.

By now one can find many recitations by Al-Haj Abd er-Rahman ben Moussa on YouTube, for example the complete Qur'an in 5 parts here:
https://www.youtube.com/user/tanga1958/videos
If you put his name (abderrahman ben moussa) into the search bar of YouTube you will find many many more files.
There are now also 40 downloads to be found on platforms like Amazon, Deezer etc.