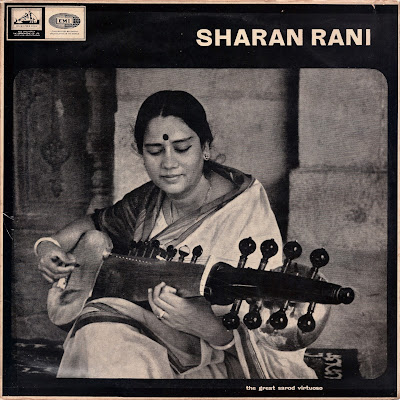 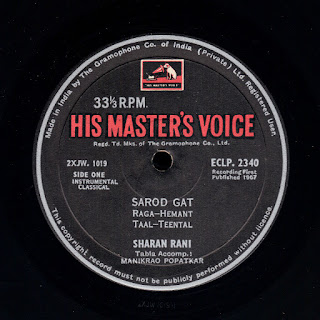 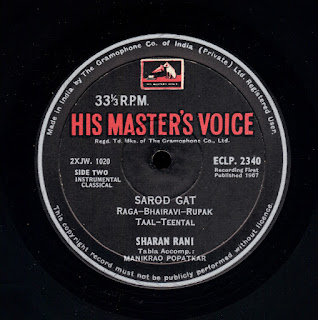 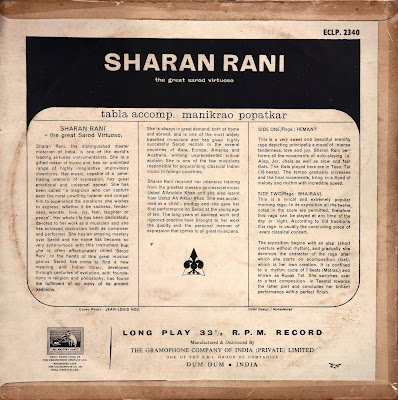 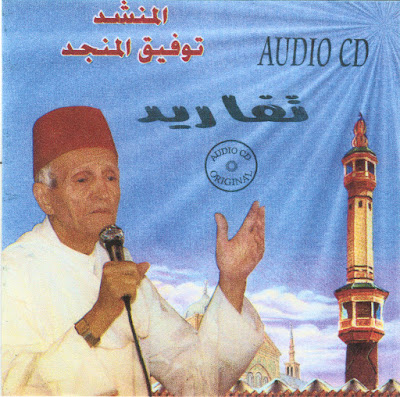 We continue here our series of recordings from Syria which our dear friend Danny brought years ago from a trip to Syria. The next couple of recordings will be of Sufi music by some famous Munshidin and their groups. Mostly this "music" is purely vocal, sometimes it is accompanied by frame drums.
The Munshid Tawfiq Al-Munajjid seems to be the most famous and outstanding of the older munshidin. I couldn't find any details about his life or background nor if he is still living. He was one of the two teachers of the famous Hamza Shakkur. His singing is very intense. 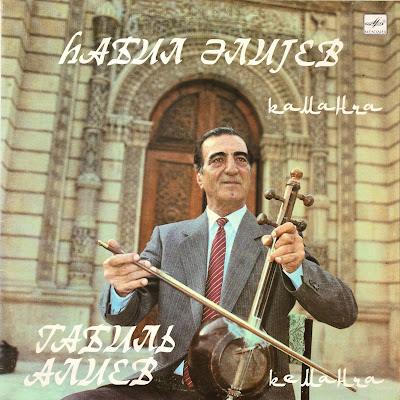 We only received recently the sad news that Habil Aliyev, the great Kemencheh master from Azerbaijan, past away on september 8th. Here we offer in his memory a LP we bought at a memorable concert in Cologne in 1993 in which he participated. Both me and my wife were very impressed by his stage presence and his very noble, almost regal bearing and of course his exquisite music. I knew him already before from recordings. It might have been that I bought this LP already before in an Iranian shop in Cologne which used to have a whole pile of LPs from Sowjet Azerbaijan. He was probably the greatest Kemencheh player of the 20th century, held in very high esteem in his country and also in Iran, where he performed reguarly, occasionally with Shajarian, and also recorded. I have two Iranian cassettes by him, which a couple of years ago were republished on CD. The CDs can be obtained from info@raga-maqam-dastgah.com.
In the west there was only one CD published in 1992 by Auvidis, no longer available for many many years, and two CDs of the ensemble which I saw in 1993 in Cologne, published in 1994 by Institut du Monde Arabe/Blue Silver, also no longer available for many years and never republished. The ensemble consisted of Habil Aliev, the great tar player Ramiz Gouliev, the two singers Zahid Gouliev and Elza Gaybalieva and the nagara player Ali Amiraslanov. These two CDs contained also a number of solos by the two instrumentalists. It's a pity that they were on the market only for quite a short period.
For more info see:
http://habilaliyev.az/eng/diskoqrafiya/plastinka.html
https://en.wikipedia.org/wiki/Habil_Aliyev 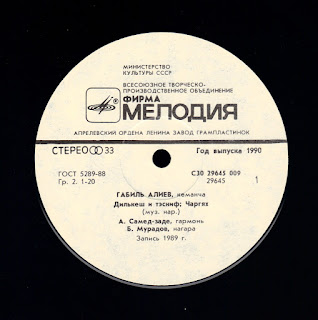 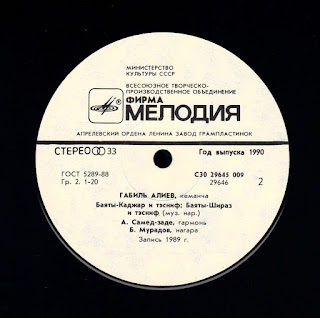 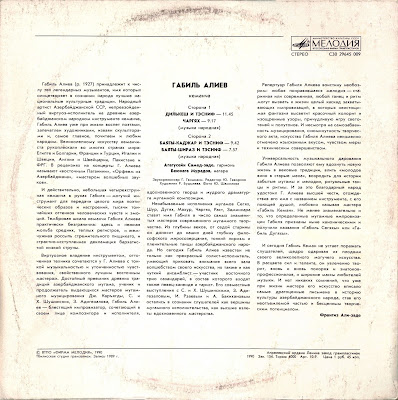 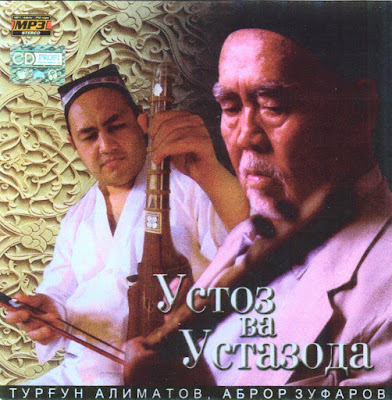 Here we present the next in our series of MP3-CDs which our dear friend Danny brought a couple of years ago from Uzbekistan. This time an instrumental album by the greatest Uzbek instrumentalist of the second half of the 20th century: Turgun Alimatov, a Sato, Tanbur and Dutar player.
For more infos on the artist see: https://en.wikipedia.org/wiki/Turgun_Alimatov
This CD also contains music by his student Abror Zufarov.
About him see: http://www.classicmusic.uz/Abror.htm
The CD contains six folders, three containing 39 tracks by Turgun Alimatov and three by Abror Zufarov. 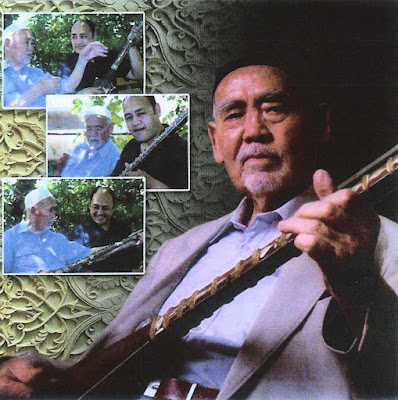 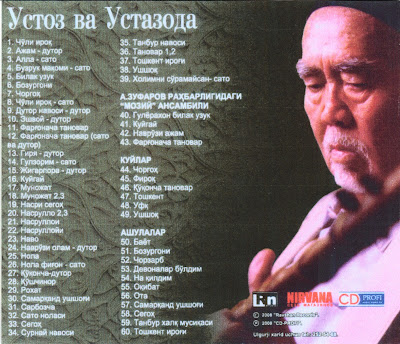 In 1995 Ocora - Radio France published a CD by him which unfortunately is no longer available: 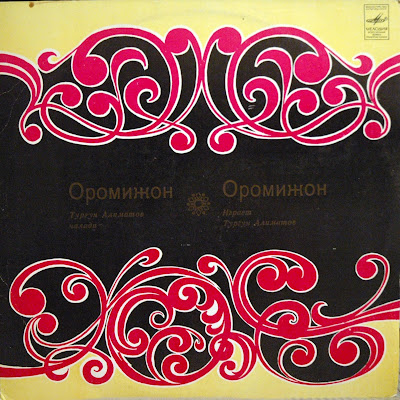 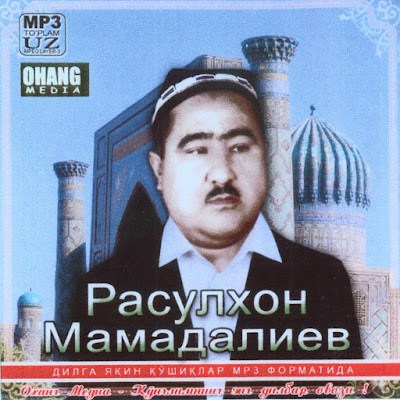 Here the fourth post in our series of MP3-CDs of great singers of the Maqam traditions of Uzbekistan, published years ago in Uzbekistan and brought by our friend Danny from a trip to Uzbekistan. This time the great singer Rasul Qori Mamadaliev (1928-1976).
Jean During wrote about him in the booklet to the CD "Ouzbekistan - Les Grandes Voix du Passé (1940-1965)", on which he published three tracks by the great singer, the only ones available in the west:
"Rasul Qari Mamadaliev (1928-1976) was another brilliant successor of Jura-khan Sultanov whose repertoire he picked up, listening to him perform at toy. He also studied with Hamraqul Qari and Damla Halim Ibadov from Bukhara. Just as he learnt Khorezm repertoire, listening to Sultanov, he also made his own synthesis of the three great Uzbek-Tajik traditions. He was exceptional in other ways too: blind, he had a phenomenal memory and, if he liked a tune, was able to pick it up after one or two hearings. He put together a repertoire of thousands of songs, just listening to the radio or recordings. Short and very fat, his powerful, chubby hand had trouble reaching the low notes at the bottom of the neck of the tanbu so he held his Instrument vertically and only played in the top register with a tension and a density more akin to Uigur or Azeri lutes than to those of Ferghana. He was in great demand at toy for the extraordinary atmosphere he was able to create, and also for his sense of humour and witty tongue. In this context, his music was much more powerful  and impressive than in his recordings for the radio. Unfortunately the technical quality of his toy recordings was not good enough to be included in this anthology.
For certain connoisseurs, he is the greatest classical bard (hafiz) of this century, especially when one considers the range of his capabilities (an unequalled vocal and instrumental technique serving all genres and traditions), his incredible memory, his humour and wit. What's more, he was generous (he would sing for nearly eight hours a day) and would give his audiences exactly what they wanted, at times even more, with songs in a lighter vein and Russian melodies.
One anecdote reveals the provocating aspect of bis personality, and his respect for tradition. In his village, near Quqand, Rasul Qari had more than a dozen students. One night, at a party they had all been invited to, Jura-khan Sultanov turned up. From 6 p.m. until l a.m., Rasul Qari had each of his students sing the best pieces from Jura-khan's repertoire, taking away tbe latter's chances to demonstrate his superiority. Jura-khan just waited quietly for his turn. When he was finally asked to sing, he rolled up his sleeves, pitched the tanbur up a tone, and performed one of his compositions that nobody knew, to a poem by Nava'i. His interpret­ation was so astounding that he eclipsed everyone else. When he had finished, Rasul Qari came up to him and fell to his feet, begging his pardon. Although not a student of Jura-khan, he had learnt many of his compositions thanks to the radio. Rasul Qari also died singing, from a cerebral stroke, at the age of forty-seven." 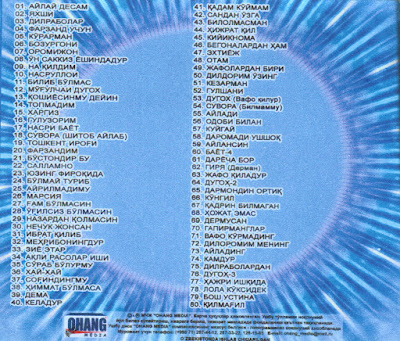