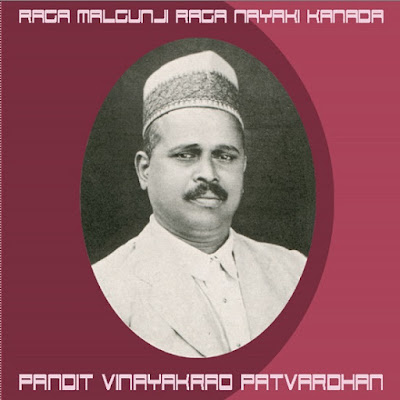 Here two other beautiful recordings by the great master. 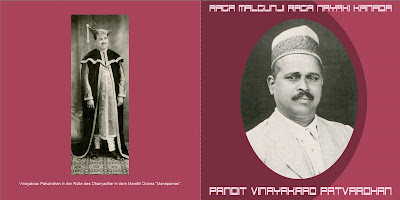 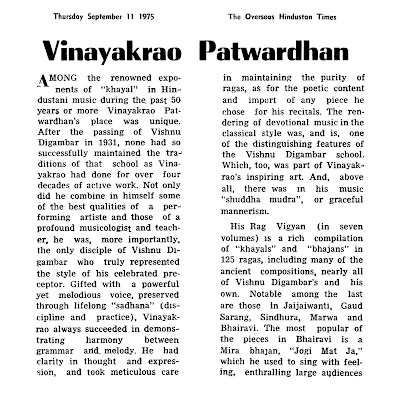 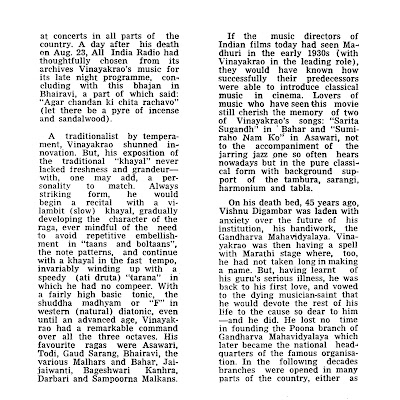 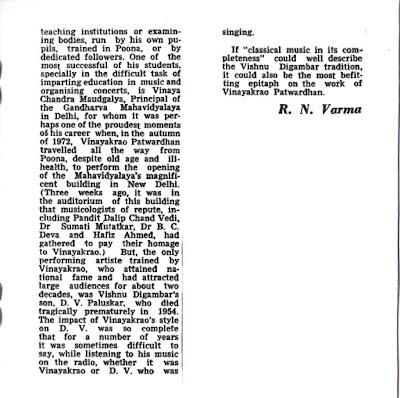 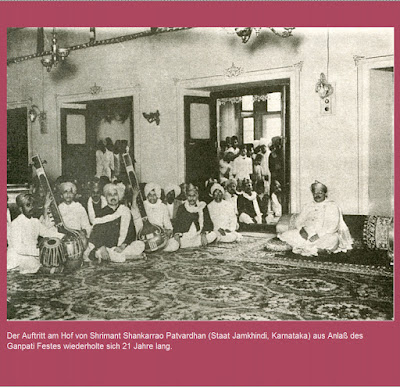 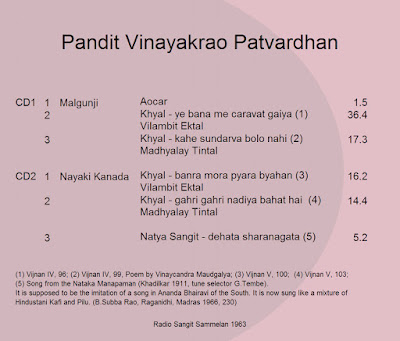 Many thanks to KF for the recordings and the nice booklet. 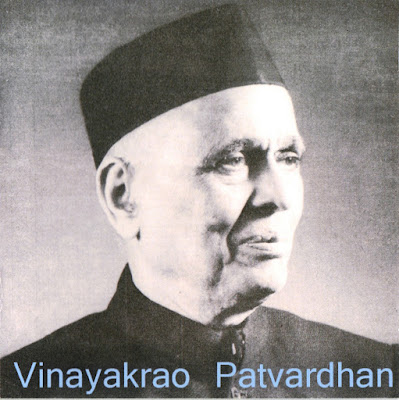 Today is the 40th anniversary of the death of the great singer of the Gwalior Gharana, Pandit Vinayakrao Patwardhan (22 July 1898 – 23 August 1975). We take this opportunity to remind of this almost forgotten great singer. We had posted in 2011 one shorter recording by him. See:
http://oriental-traditional-music.blogspot.de/2011/07/echoes-from-glorious-past-sardarbai.html 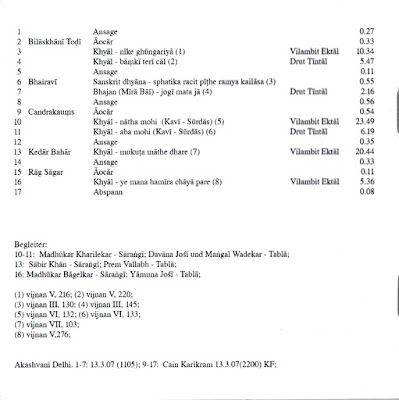 Many thanks to KF for the recordings and the nice covers and booklet.
It seems that, at least the first part, is from a radio broadcast the day after his passing. 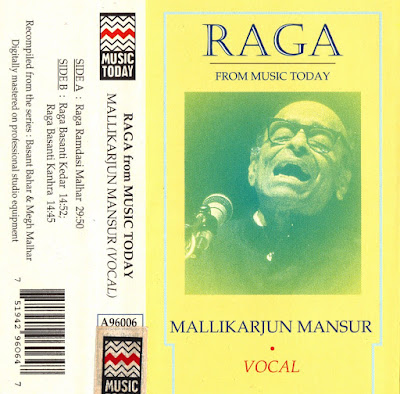 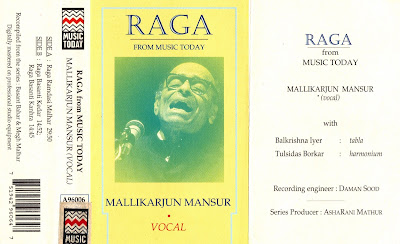 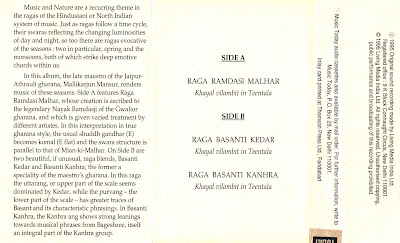 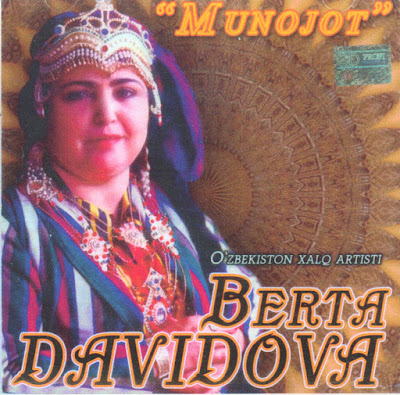 Next in our series of Uzbek MP3-CDs, which our friend Danny brought years ago from Uzbekistan, we present one by Berta Davidova, the great singer of the Shashmaqam of Bukhara. She was one of the main singers in the legendary complete Shashmaqam recorded in the early 1960s under the direction of Yunus Rajabi, which we posted in 2012. See:
http://oriental-traditional-music.blogspot.de/2012/03/shashmaqam-of-bukhara-box-of-16-lps.html 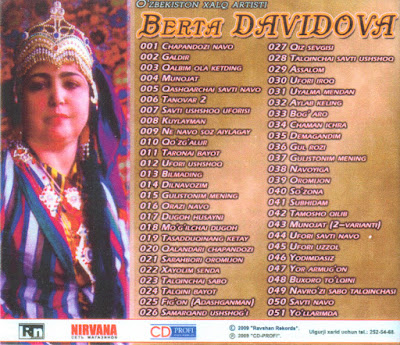 Berta (Balur) Davydova (1922-2007) was a famous singer from Uzbekistan. She was born into a family of Bukharian Jews and learned to speak many languages such as her native tongue of Bukhori (Bukharian Jewish language), Uzbek, Russian, and Tajik. She sang songs in many of these languages and other languages of the people of the world. She was honored as People's Artist of the Uzbek SSR (Uzbekistan) for her work. A famous Uzbek song with words by Uzbek poet Alisher Navoiy, called "MUNOJOT" (Prayer), made Berta Davydova very famous and beloved by many people in Central Asia, the former USSR, and abroad. She sang the song so well that she received the title by some as "MISS MUNOJOT". She will always be remembered for her music and development of the culture of the Central Asian peoples like Uzbeks, Tajiks and Bukharian Jews. She is buried at the Bukharian Jewish Cemetery in Tashkent Uzbekistan.
from: https://www.youtube.com/watch?v=BLrb77ioS24 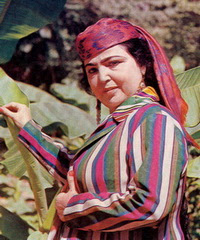 In recent years we have witnessed an active interest towards classical Oriental music art in the whole world. Makom is a phenomenon of the spiritual culture of Central Asia; however its significance goes for beyond the limits of the region. From the philosophical point of view, makoms are a musical reflection of the objective reality, expressed through symbols and notions of a high aesthetic order through pursuit of harmony of Infinity. Although we marvel at beauty and manysidedness of the instrumental part, it is still the vocal that forms the bases of makoms.
Life and creative activity of the wonderful singer of makoms - Berta Davidova is closely intertwined with the history of development of traditional musical arts of Uzbekistan. Despite the fact that her professional biography has always been closely linked to the history of the formation makomists' first ensemble, it is from/with her name that the popularity of female solo makom performance begins. Female vocal parts were an innovation seen as deviation from traditions in the practice of performance of makoms.
Berta Davidova was born in 1922 in Margilan in a family which loved music and supported musical talents of the girl. In 1935-1938 she studied at Tashkent Medical Vocational School. During the Second World War she worked as a nurse at Tashkent military hospital, where she sang for wounded soldiers, patients of the hospital.
Berta Davidova's career as a singer began in 1943, when she started to work as a soloist of the chorus of the State Radio Committee, and then as a soloist of "Makom" ensemble under the leadership of Yunus Rajabiy. She became renowned as early as in 1946 after she had performed classical folk song "Munojat" during the live broadcast on Uzbek radio.
In 60s of XX century, over period of work in "Makom" ensemble, where her talent and remarkable musical gifts showed up best, she quickly became well-known and occupied a well-deserved place among outstanding artists of the country and beyond. Spiritually elevated poetics of the invaluable asset of the national and world culture "Shashmakom", which has formerly been considered as elitist, palatial music, became accessible to general public and acquired popularity to a large extent due to high performing mastery of Berta Davidova and her self-sacrificing serving the cause of art. Makoms formed the basis of her repertoire. In makom's history there were many bright performers, but the performance manner of Berta Davidova rendered makoms with new inimitable sounding amidst established traditions. Makom pieces when performed by her were steeped in deep sensations, disclosing not only the deep philosophic meaning of Oriental poetry, but also richness of her own soul.
Possessing her phenomenal musical abilities and faculty of coordinating breath and voice, which was remarkable due to unique strength and beautiful tone, enabled her to perform unrivaled ŕudjes - plangent wide-range culminations of vocal parts.
Apart from makoms, Berta Davidova performed classic songs, such as "Munojat", "Figon", "Sarakhbori Oromijon", "Samarkand ushogi", "Dugokh", "Bayot-1", etc.
Both makoms and song repertoire of the singer is included in the "Golden Stock" of Uzbek radio. Due to outstanding talent of Berta Davidova, a large variety of pieces of Oriental musical art has been included in the world treasury of musical masterpieces."
from: http://www.classicmusic.uz/Berta%20Davidova.htm 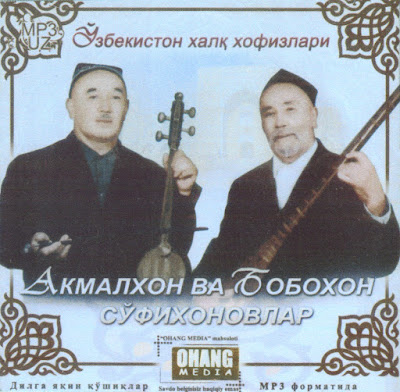 In Uzbekistan quite some years ago MP3-CDs by the great singers of mid last century had been published. These recordings probably have been released originally on LPs by Melodiya, the Sowjet state-owned label. These MP3-CDs contain in general the complete recordings by these artists. As these artists are mostly completely unknown in the west and their songs are such beautiful jewels and these CDs are extremely difficult to get, even in Uzbekistan, we brake here with our habit not to post music from CDs. We will post about one or two of these MP3-CDs per month. We are very very grateful to our dear friend Danny, who brought these CDs a couple of years ago from a trip to Uzbekistan and had to undergo enormous difficulties to collect all these recordings from shops and bazars in several towns in Uzbekistan. He was so kind to let me copy all of them. We have tried since then to find ways to order these CDs but never got any response from the labels. According to the information we could gather they seem no longer available. Other friends who have been in Uzbekistan in the last years were unable to find any or only very few CDs of traditional music.

We start here with two legendary Sufi singers, the brothers Akmal-Khan and Baba-Khan Subhanov. Jean During wrote about them in the booklet to the CD "Ouzbekistan - Les Grandes Voix du Passé (1940-1965)", on which he published three tracks by the brothers, the only ones available in the west:

"THE LAST REPRESENTATIVES OF SUFI TRADITION
Besides these three traditions (the three Maqom traditions existing in Uzbekistan: Shashmaqom of Bukhara, the Maqom of the Ferghana Valley and the Maqom of Khorezm), yet not fundamentally different, existed a huge repertoire of Sufi songs, about which not much is known. Of this repertoire, passed on through initiation by the Yasavi (often also Naqshbandi) whose practising members were to be found a little throughout Central Asia äs far äs the Uigurs of Xin-jiang, Uzbek emigrants and Chinese Hui, only traces remain. Certain hymns like "zikri Ushshaq" were common to the Sufis of Kashgary and Ferghana. But the level of traditional Sufi singing in Namanghan (Ferghana) was not as high as it was in Turkestan. This town (now in the Uzbek region of Kazakhstan) is the site of the tomb of Ahmad Yasavi (l Ith Century).
All Uzbek and Tajik classical music being impregnated with a mystic ethos, to fully understand it, one needs to refer to Sufi values and culture. With the revolution, materialism swept all other creeds aside. After several decades of religious persecution, almost nothing remains of Sufi devotional and musical practices. The vestiges left by the Subhanov brothers are, in the light of this, even more precious: a constant reference for connoisseurs, they represent the consummate perfecting of a spiritual art and ideal.
Subhan Ata was a Sufi singer from Turkestan, first noted by Belaiev and Uspensky, Russian musicologists from 1920 to 1950. His nickname came from the piety of his singing and invocations (subhan: praise). His two sons Akmal-khan and Baba-khan Subhanov perpetuated this spiritual repertoire through a period when any mystical or religious allusion was mercilessly censored.
Turgun Alimatov, the celebrated master, who sometimes accompanied the Subhanov brothers on the violin, recalls them for Theodore Levin in his book "The Hundred Thousand Fools of God", with these words of praise:
«In contrast to other Singers, the Subhanovs performed exclusively songs with a religious content. They were religious people themselves, even during the time when religion was strictly forbidden. People who rejected religion simply didn't associate with them, and for their pari, the Subhanovs stayed away from atheists. They were invited to the houses of believers. «I've been in the Company of very different hafizs [singers], but I've never seen the kind of respect l saw for the Subhanovs. When they appeared in the distance, everyone stood up, and stood to two sides, bowing their heads and putting their hands over their hearts. Why were they so respected?... They conducted themselves nobly. They had very clean souls. Second, what they sang was in a sincere religious style. In contrast to other singers, who only said the words God, religion, etc., they approached these words very attentively and chose the most affective texts. They cornpletely excluded light and worldly texts (...). «Among real, clean artists, I never saw such people. Real artists lived honestly. They had high regard for both their art and their faith. Baba-khan-aka, Shah Karim-aka, they always valued their masters' spirits, their teachers who were deceased. They prayed to their spirits, they always remembered them. They kept in contact with their families and took part in all of their family occasions. And that's the way they raised their children. Look at their children; they're following the path of their parents. «... Baba-khan-aka and Shah Karim-aka were people who were not only clean in the soul, but in their actions. (...) After religion, there's nothing better and more dignified than art»." 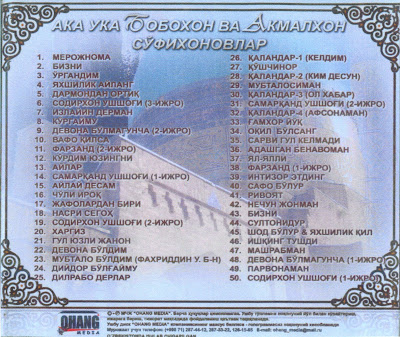