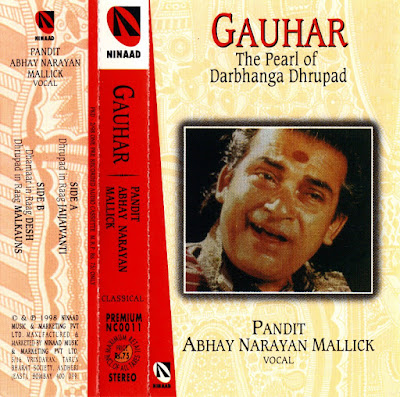 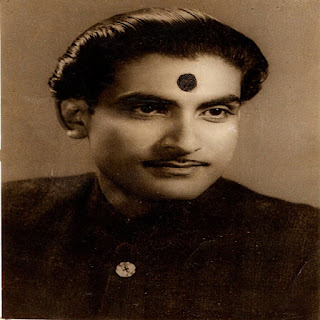 Addition on 21st of June 2017:
A friend made the following remark:
"I think there is some discrepancy between the music and what is stated in the cover which was included, and I thought you might be interested to know. The cover said there were three tracks Jaijaiwanti, Desh & Malkauns. The download from your blog does indeed have three tracks, but in fact tracks 1 & 2 are the same music, track 1 fades out, and track 2 fades in, at almost the same place (so easy to splice together). They are both Jaijaiwanti. The third track is Desh and there is no Malkauns. I suppose this is a problem with the original tape, as the tracks are exactly the same on MusicIndiaOnline."
Thank you very much. I agree completely. So the second track is the continuation of the Raga Jaijaiwanti on the first side.
Posted by Tawfiq at 10:27 5 comments: 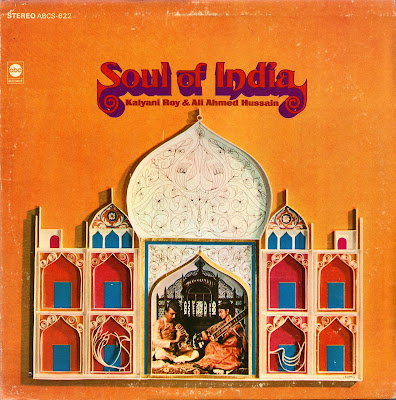 "Born on April 29, 1931, sitarist Kalyani Roy is one of the few major women instrumentalists in her genre, with a career spanning 50 years. Kalyani is a disciple of Ustad Vilayat Khan and has had training from other masters, including percussion genius Pandit Jnan Prakash Ghosh. Kalyani`s immediately identifiable sitar tone is a unique variant of the Vilayatkhani sound, her style mixes a vibrant rhythmic approach with Vilayat Khan`s lyricism.
She performs regularly on Radio, Television and was a regular participant at music conferences both in India and abroad. She made a number of disc records, both solo as well as duet with Radhika Mohan Maitra. In addition to Ustad Vilayat Khan and Jitendra Mohan Sen Gupta, she studied also under Shauqat Ali Khan and Karamatullah Khan for a brief period. She is also a teacher of repute."
from: http://suman-bhattacharya.webs.com/gurus.htm

"Ustad Ali Ahmed Hussain Khan (21.03.1939 – 16.03.2016) was one of the veterans and maestros of the shehnai - an instrument which is an integral part of Indian Classical musical culture. Ustadji was influential in taking the instrument out of wedding receptions and other social functions to the concert stage as well as to various international destinations.
He applied his unique and innovative style and reinvented the form of the shehnai by way of its application in gayaki, sur meend, pukaar, tantrakari, baat ki taan, sapat ki taan, jod and jhala, taking it to a new level of performance.
It was to Ustadji’s immense credit that he ventured to play on the shehnai many ragas that were traditionally not played on this instrument."
from: http://www.itcsra.org/sra_news_views/obituary/ali_ahmed_hussain_khan.html

A special feature of this LP is the tabla accompaniment by a very great, but less known master: Afak (Afaq) Hussain Khan. He is considered by connoisseurs to be one of the greatest tabla masters ever.
"Afaq Hussain Khan (1930–90); Lucknow tradition - Afaq Hussain Khan, the son of Wajid Hussain, was my teacher and – despite my inherent bias – the greatest player I have ever heard play live. He was widely acknowledged by musicians and connoisseurs as a true master: exceptionally knowledgeable, technically supreme, and inherently musical – a musician's musician! He played with clarity, sweetness, and a refined, balanced sound. Some would say that his approach to sound production was a philosophy in itself."
from: http://artoftabla.blogspot.de/p/tabla-maestros.html 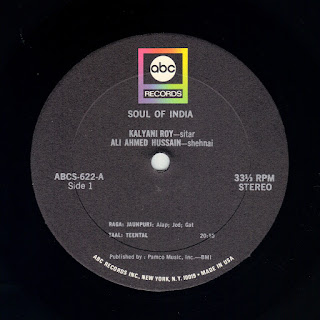 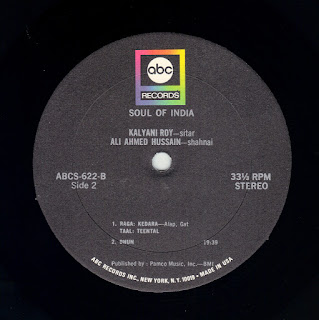 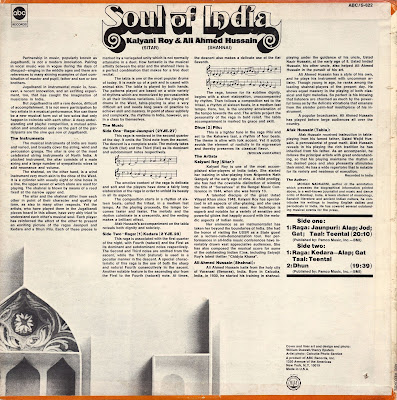 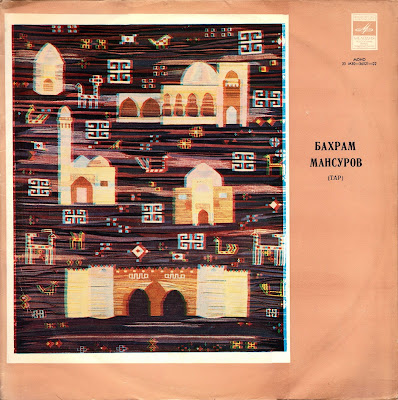 Here we present another LP by the great Tar player Bahram Mansurov of whom we posted already two other LPs: see here and here. This LP here has partly the same tracks as the one published by Unesco. Apparently they took the recordings from existing Melodiya LPs. On this LP here the tracks on side 1 are identical with the tracks 5, 6 & 1 on the Unesco LP and tracks 1 & 3 on side 2 with tracks 7 & 3 on the Unesco LP. Only tracks 3 & 4 are new. Bahram Mansurov was also present on the two previous posts of Azerbaijanian Mugam. 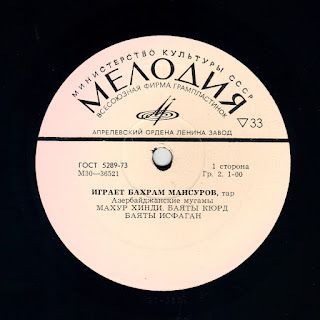 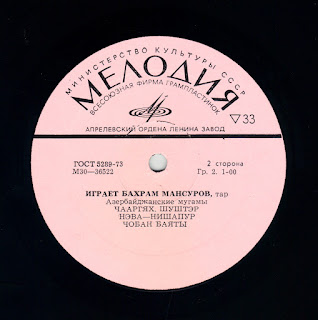 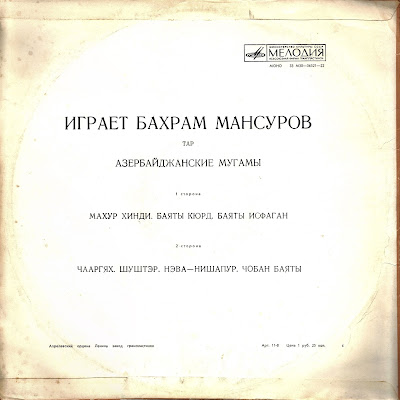 A couple of years ago a LP by Bahram Mansurov from 1959 was republished on CD in Iran by an association of record collectors: 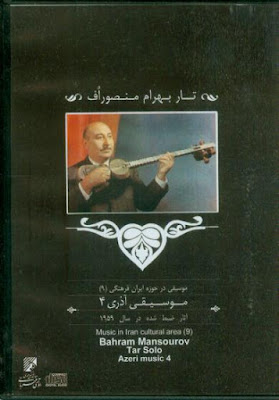 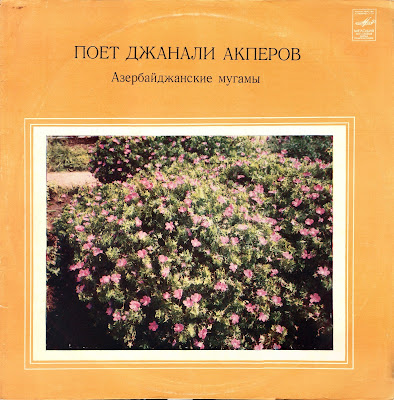 Here we present a LP by one of the greatest Mugam singers of the second half of the 20th century. In the last post there were already four pieces by him. Maison des Cultures du Monde in Paris published in 1996 a wonderful double CD by him, which is still available on their website: here 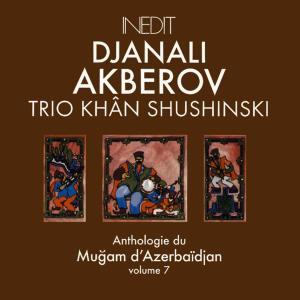 Here part of their liner notes:
"The mugham, the classical music of Azerbaijan, holds pride of place among the oriental music for its beauty, its power of expression and its extraordinary vitality. Although this music is monodic and modal, each musician, whether singer, lute (târ) or bowed lute (kemânche) player, enjoys a great freedom of interpretation which provides its special depth. The mugham offers, at one and the same time, outstanding diversity and unity: the alternance of compositions and semi-improvisations, of free and regular rhythms, of joyful and sombre moods, is balanced by the smoothness with which all these elements are linked together without interruption.
Born in the 1940s, Djanali Akberov learnt music from his family. Then, he followed Syed Shushinski's courses at the Zeynali School of Music, while he became impregnated with the art of Khân Shushinski through his concerts and radio broadcasts. Hence, Djanali Akberov is an heir of the two greatest singers of the first half of the 20th century and an outstanding figure in Azeri classical music. Despite his age of 50 when these recordings are made, Djanali maintains the qualities of voice tone and vocal suppleness of a young singer with, in addition, an understanding, a depth of interpretation that only comes with maturity." 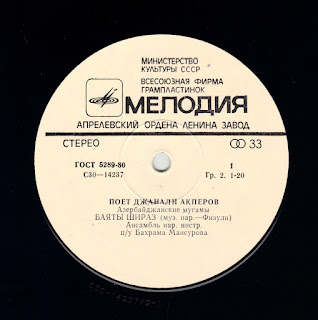 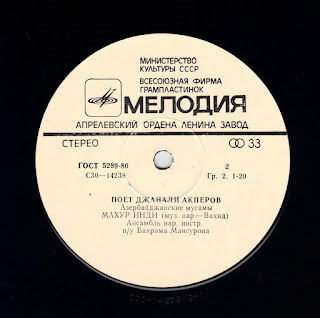 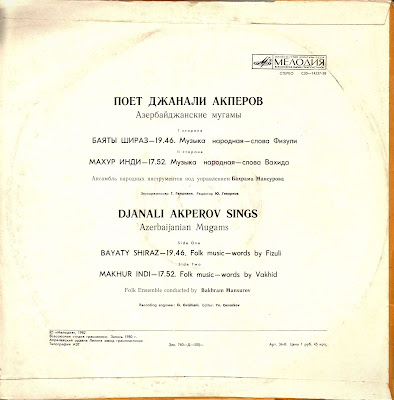 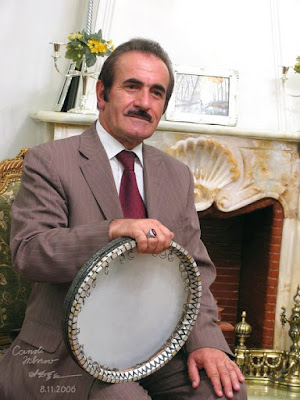 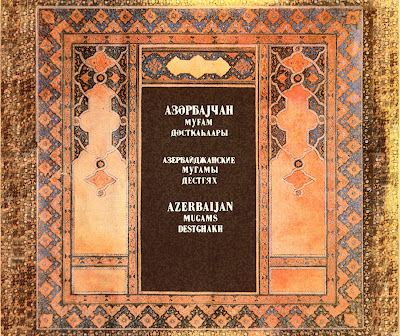 In the mid 1990s a friend lent me from his collection a box of 5 LPs of Mugams from Azerbaijan plus a single LP. Unfortunately I don't remember anymore if it was a friend from Amsterdam or from Berlin. Both had (and have) quite a collection of Melodia LPs from Azerbaijan, Uzbekistan and other Soviet Oriental Republics. A friend digitized the LPs, scanned the covers and made out of them a four CD box. The LP box "Azerbaijan Mugams Destghakh", published in 1989, consists of 7 LPs, but the one we got had only 5 LPs. The LPs 1 and 5 were missing. The singers are the greatest and most traditional of the second half of the 20th century. In the booklet the biography of Janali Akparov is missing. The 5 LPs of this box are here on the first 3 CDs: 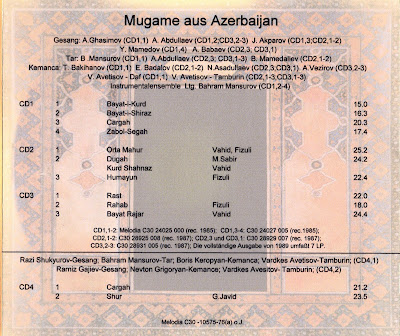