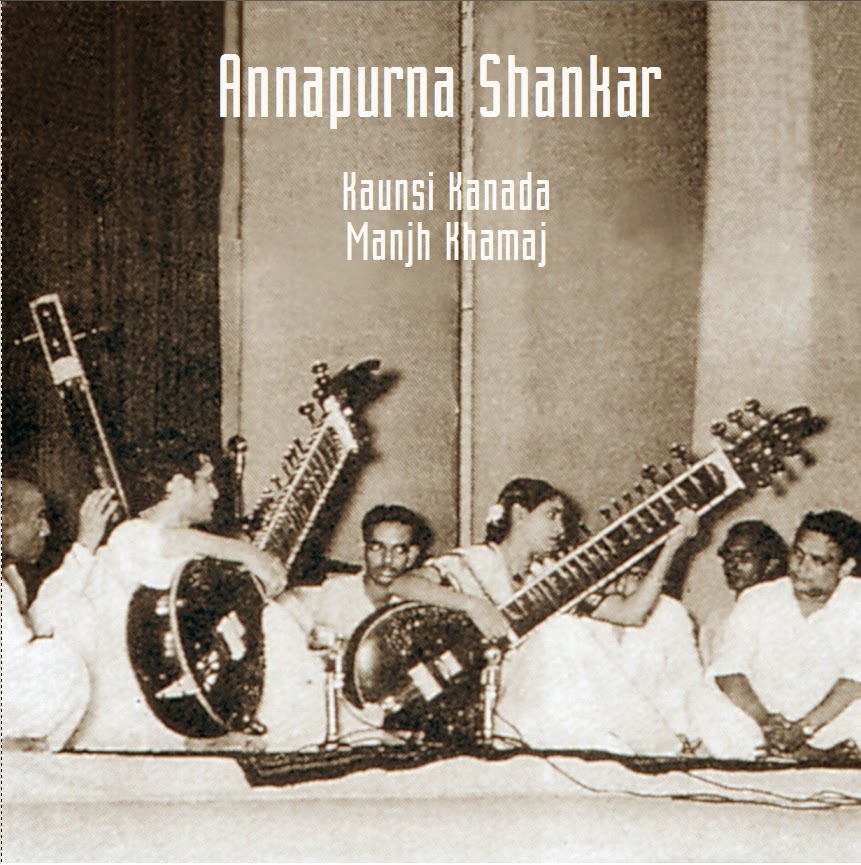 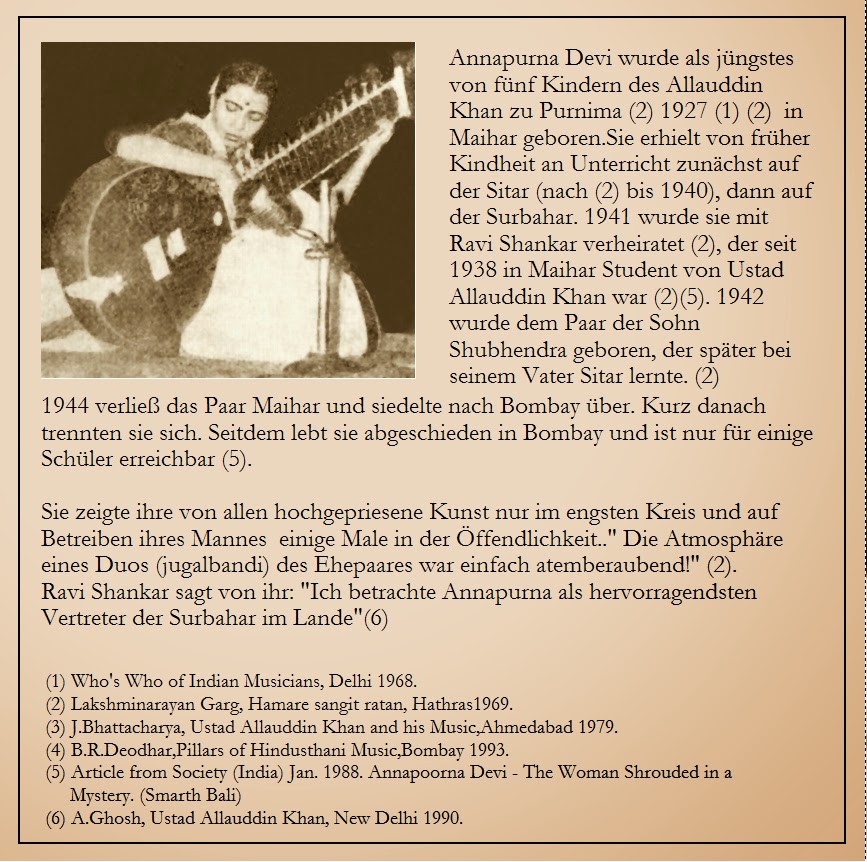 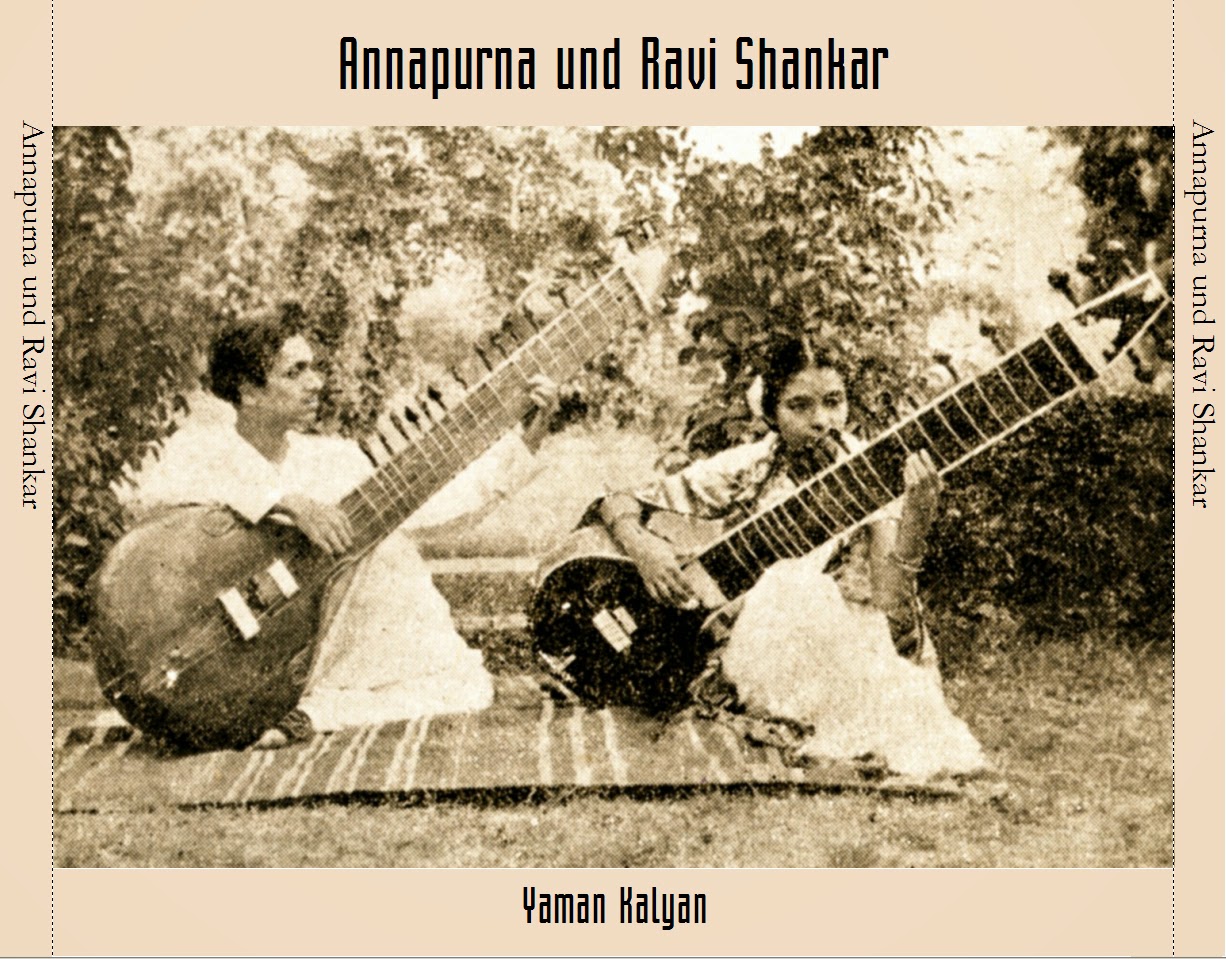 
"She has not recorded any music albums. But some of her performances (notably, 1. Raga Kaushi Kanara and Raga Majh Khamaj, Surbahar recital; and 2. Raga Yaman duet Surbahar recital with Ravi Shankar) that have been secretly taped from her earlier (1950s) concerts, are non-commercially available among a percentage of music lovers in India."

Many thanks to KF who made a nice double CD out of these recordings.
Posted by Tawfiq at 15:25 19 comments: 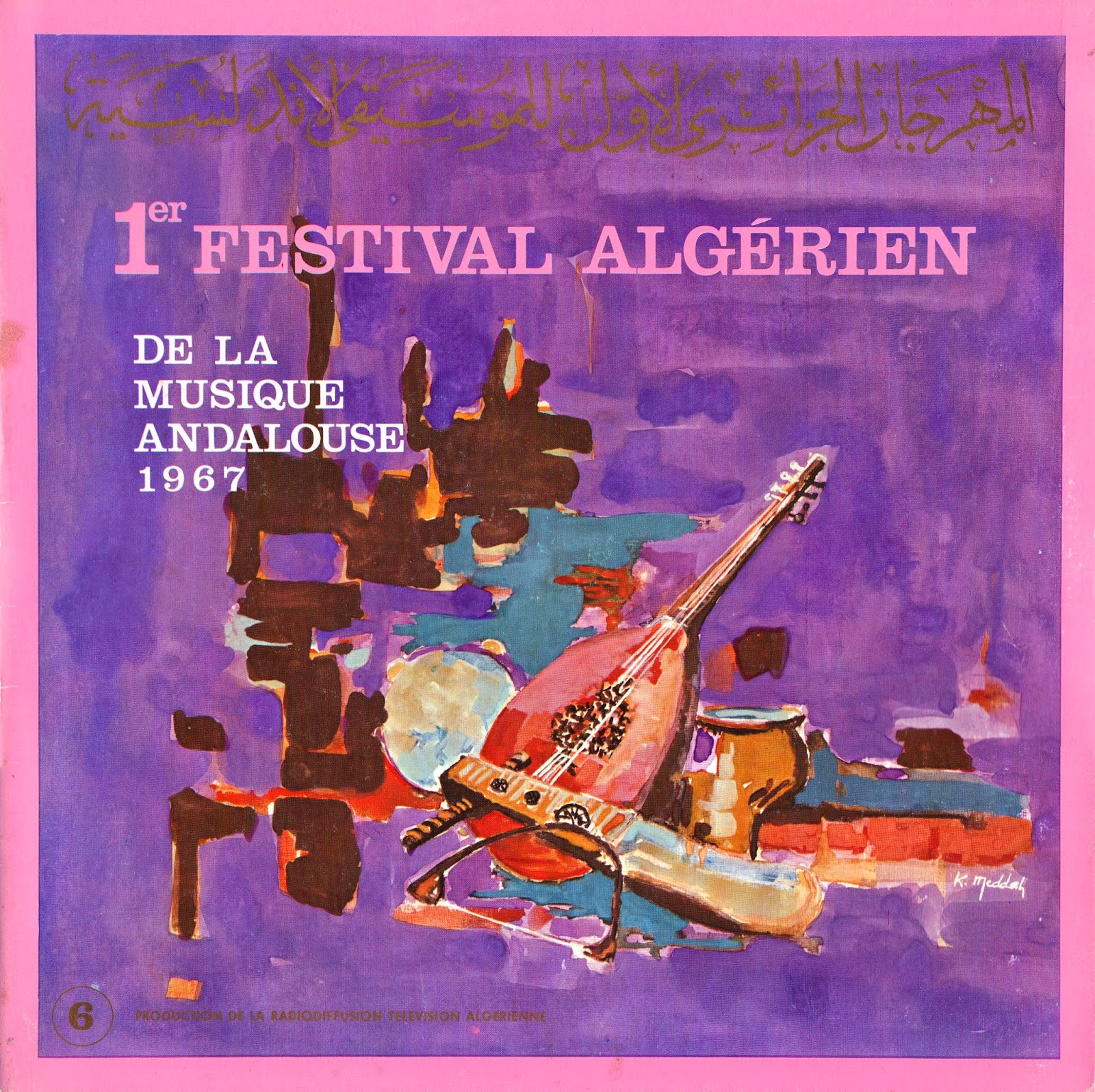 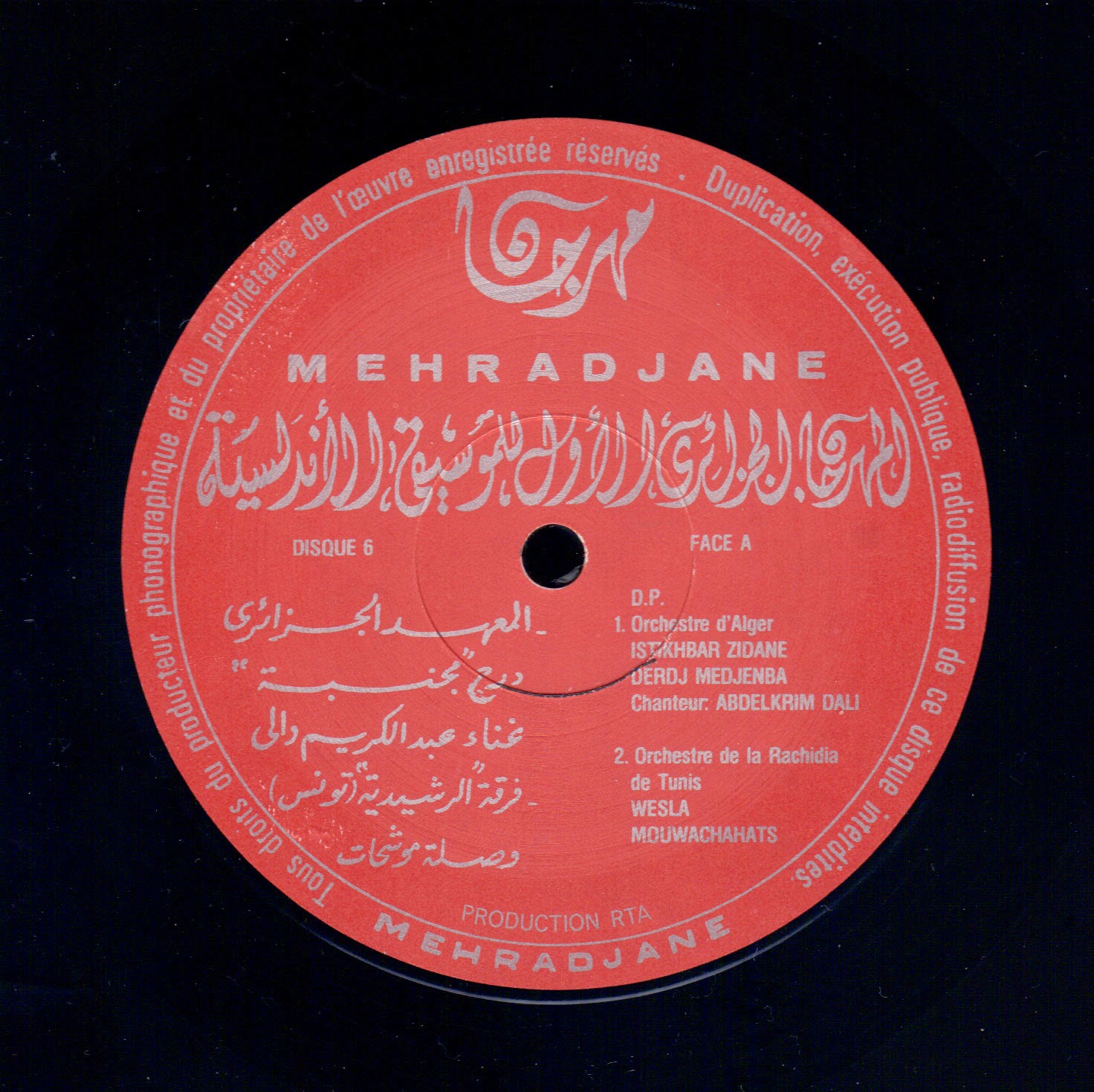 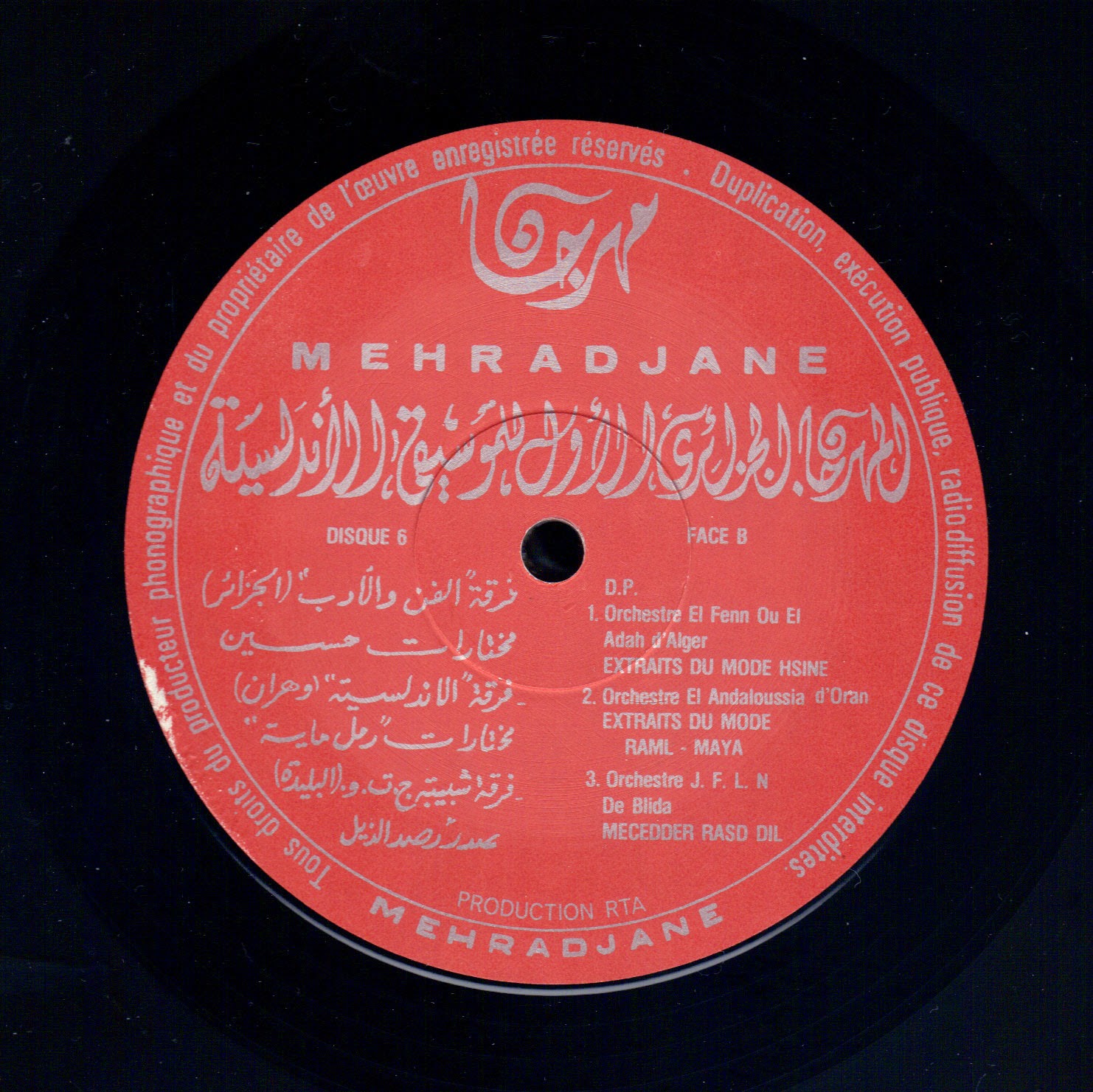 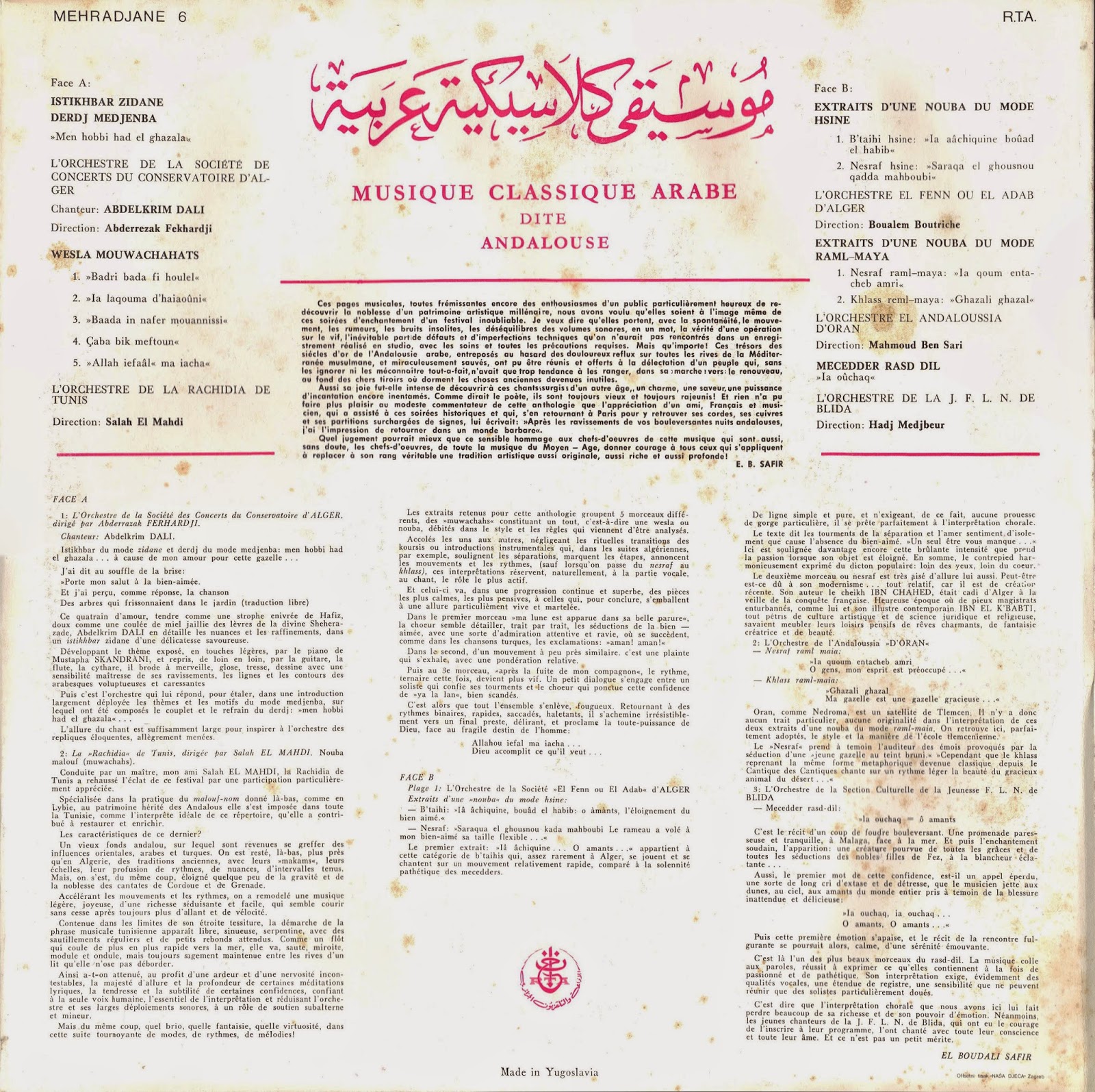 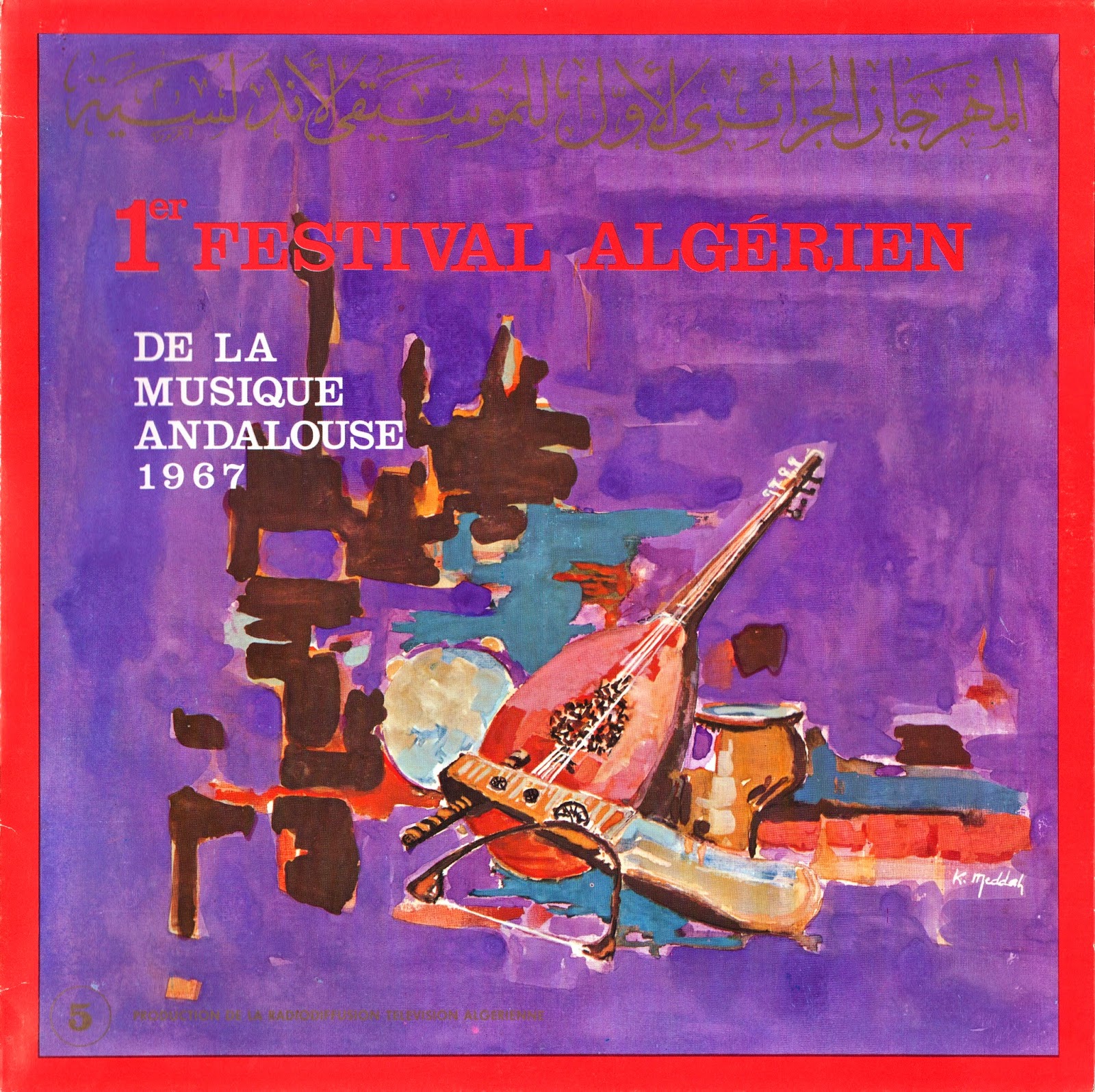 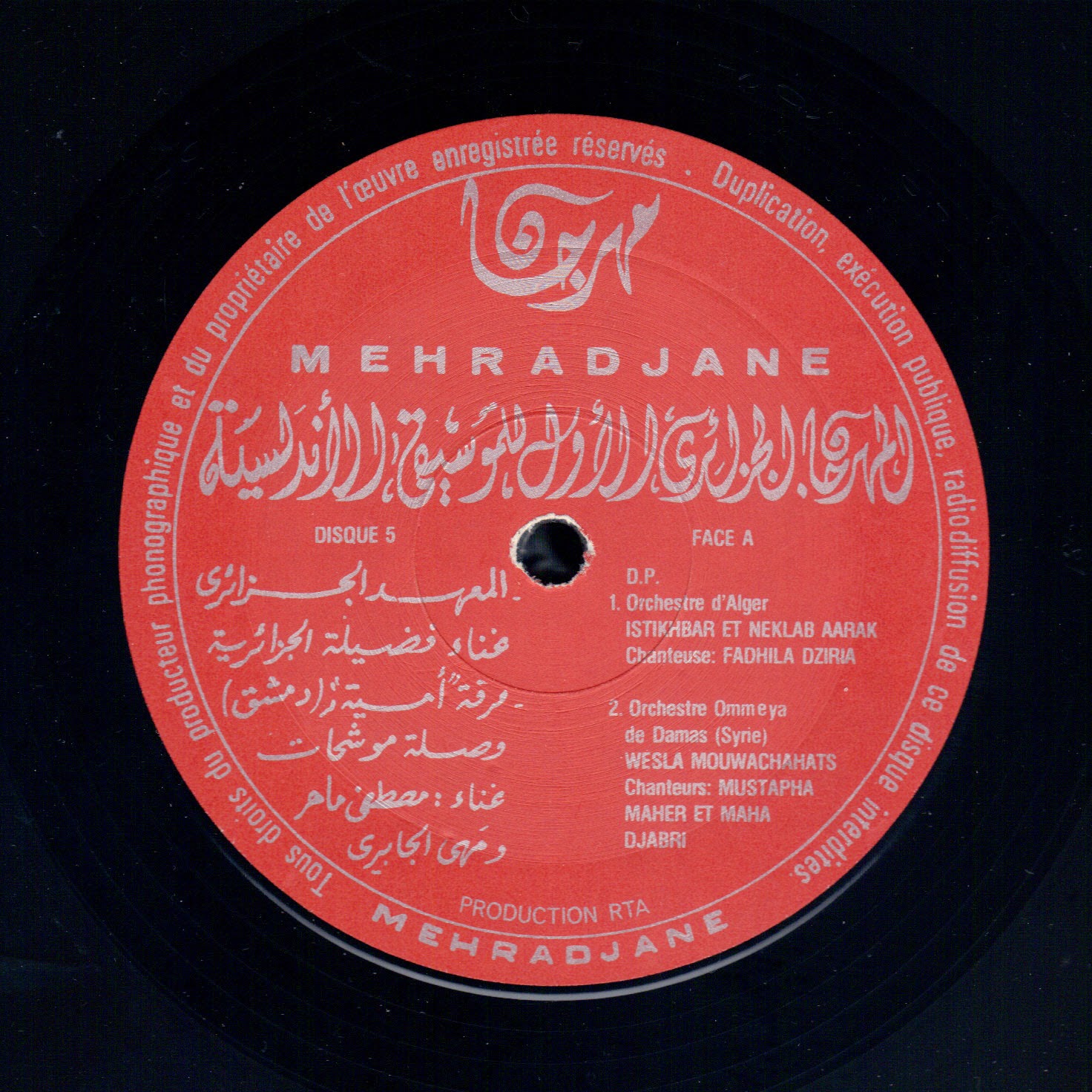 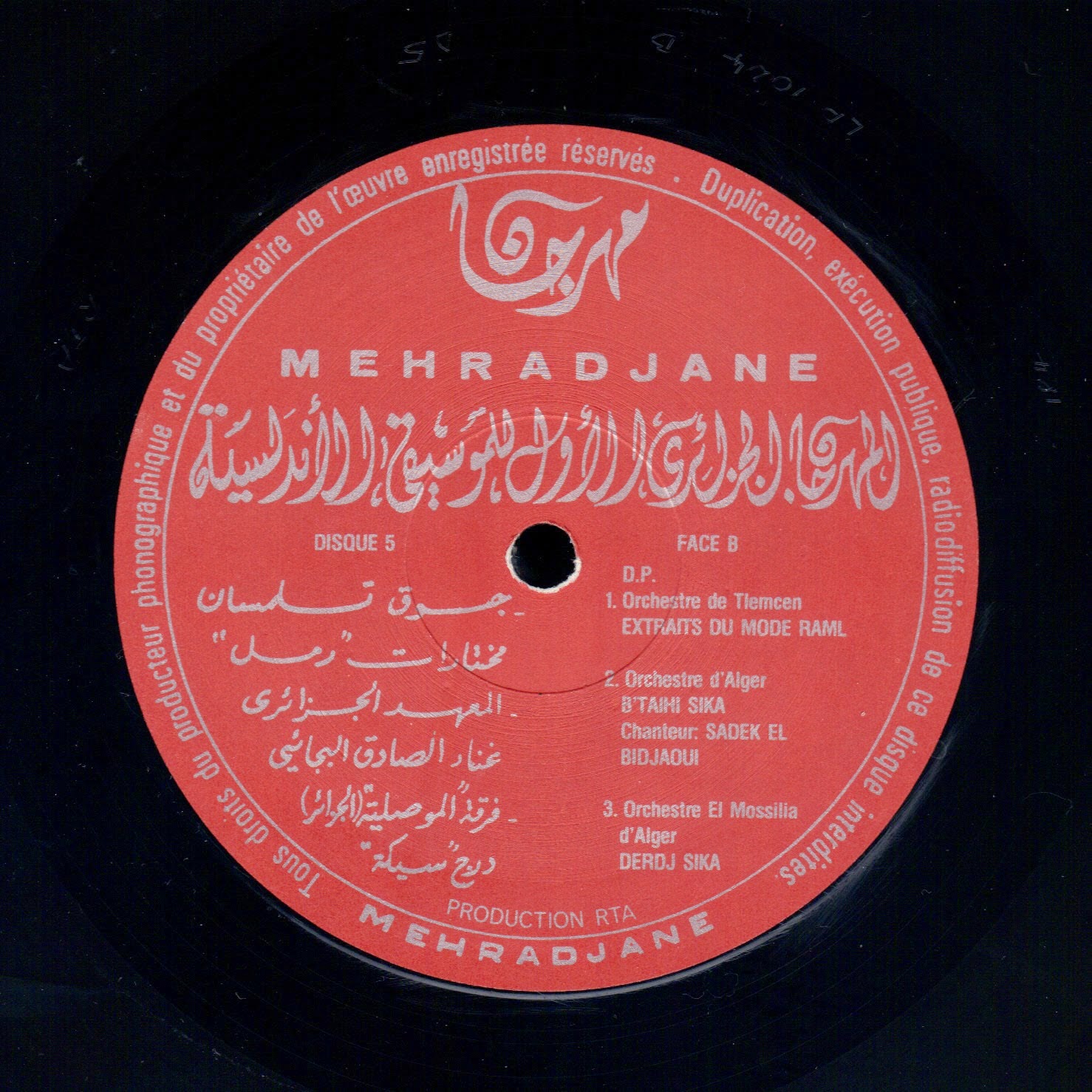 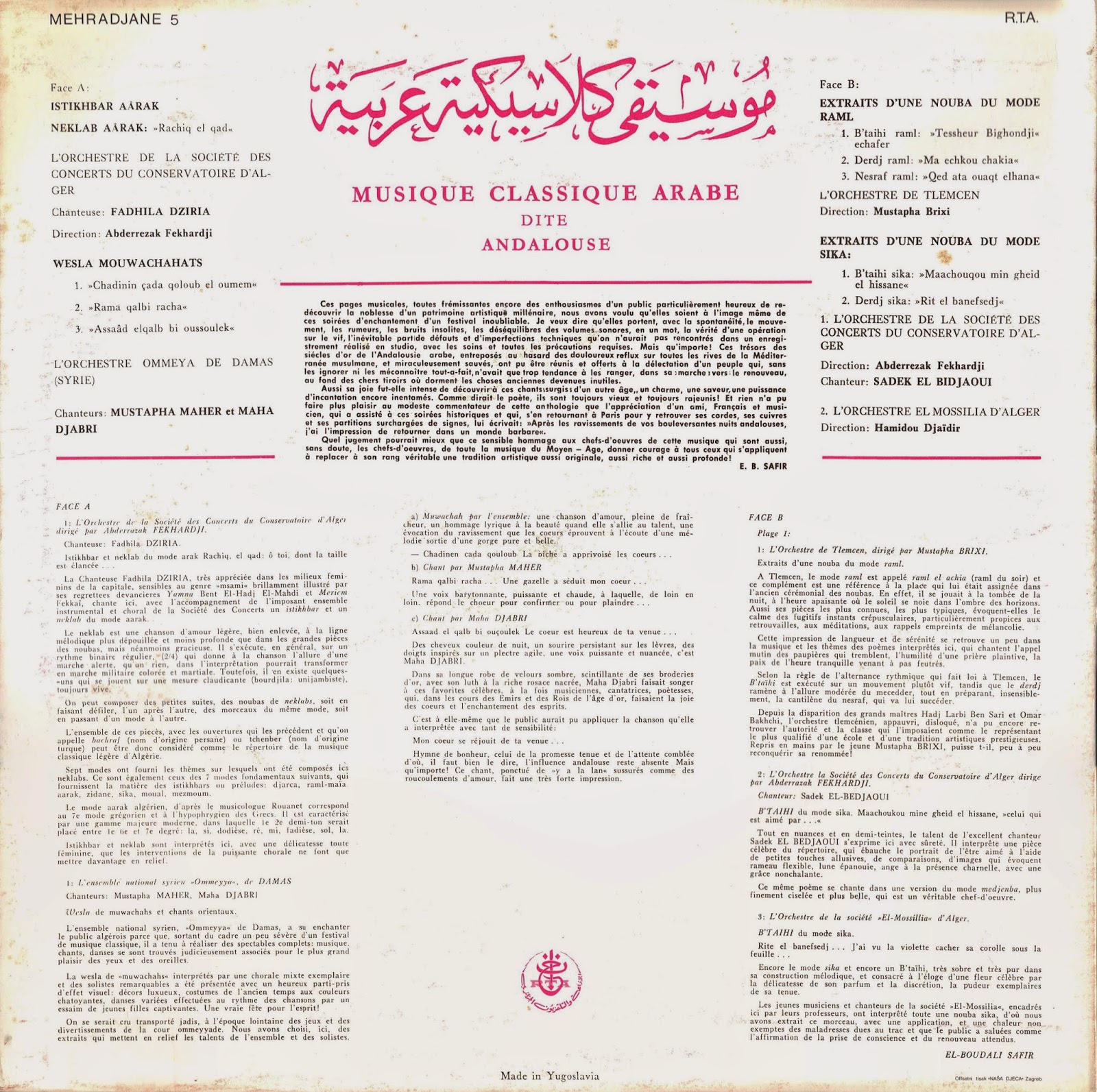 On Sadek El Bidjaoui see our post:
http://oriental-traditional-music.blogspot.de/2012/05/2eme-festival-algerien-de-la-musique.html
Posted by Tawfiq at 09:45 7 comments: 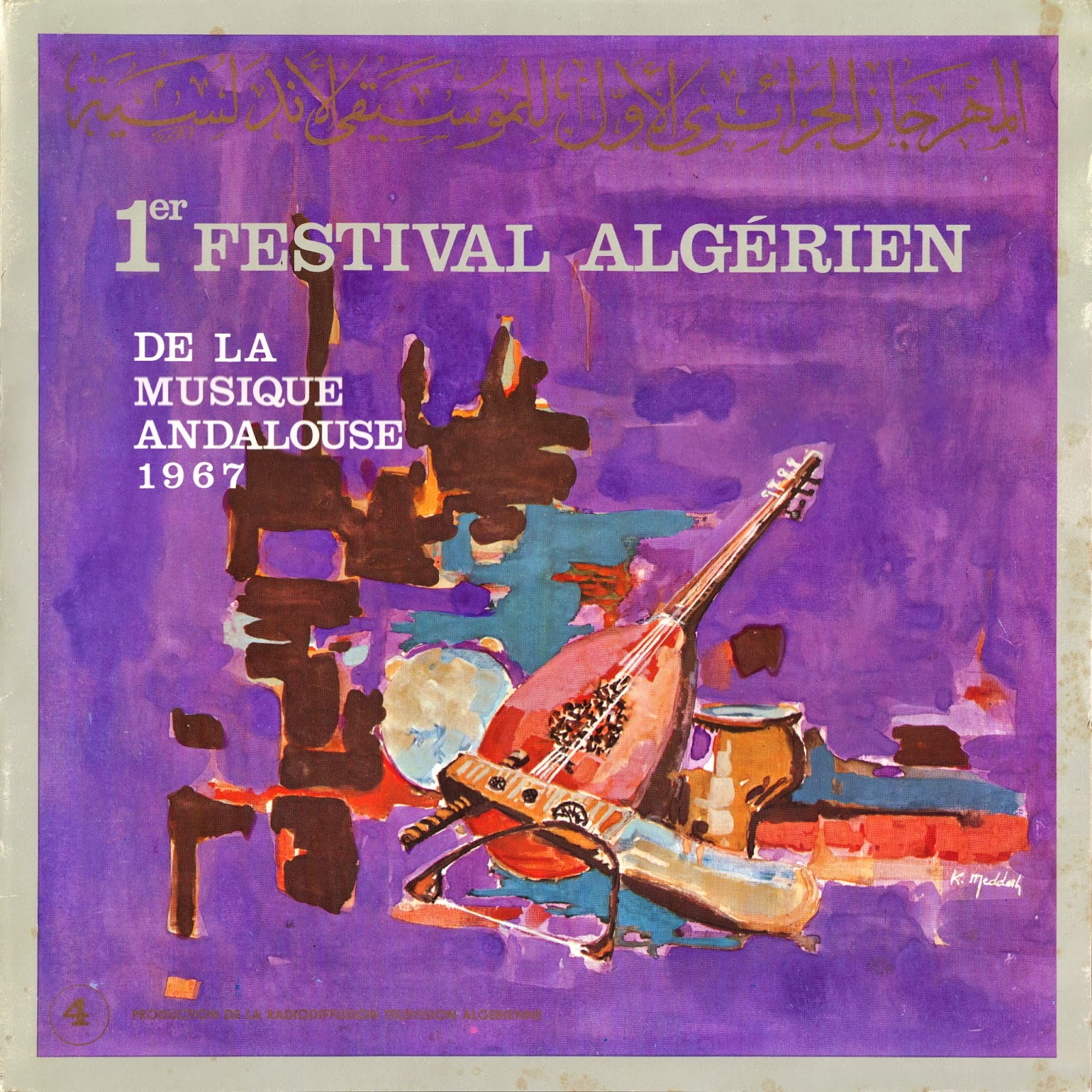 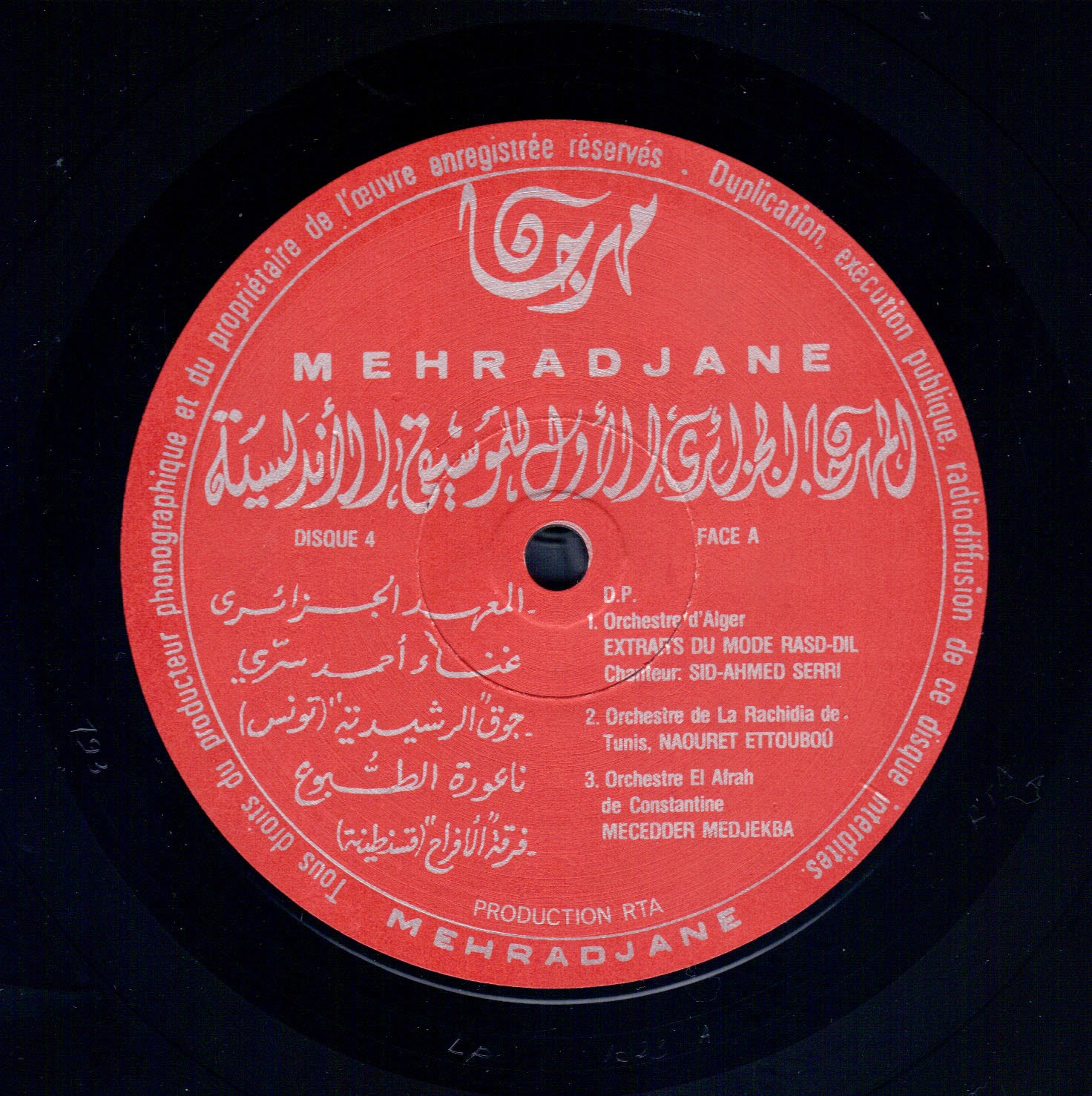 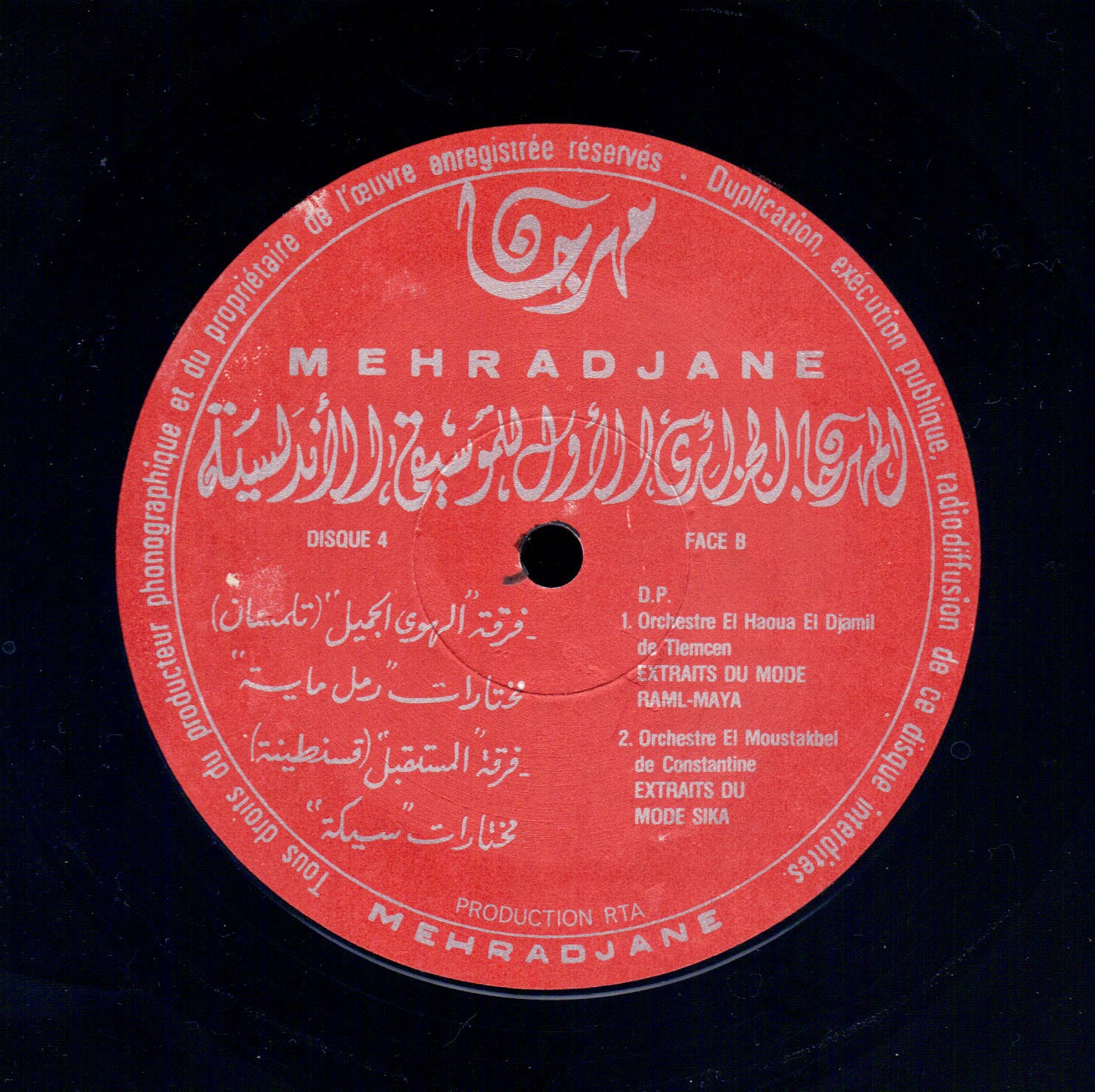 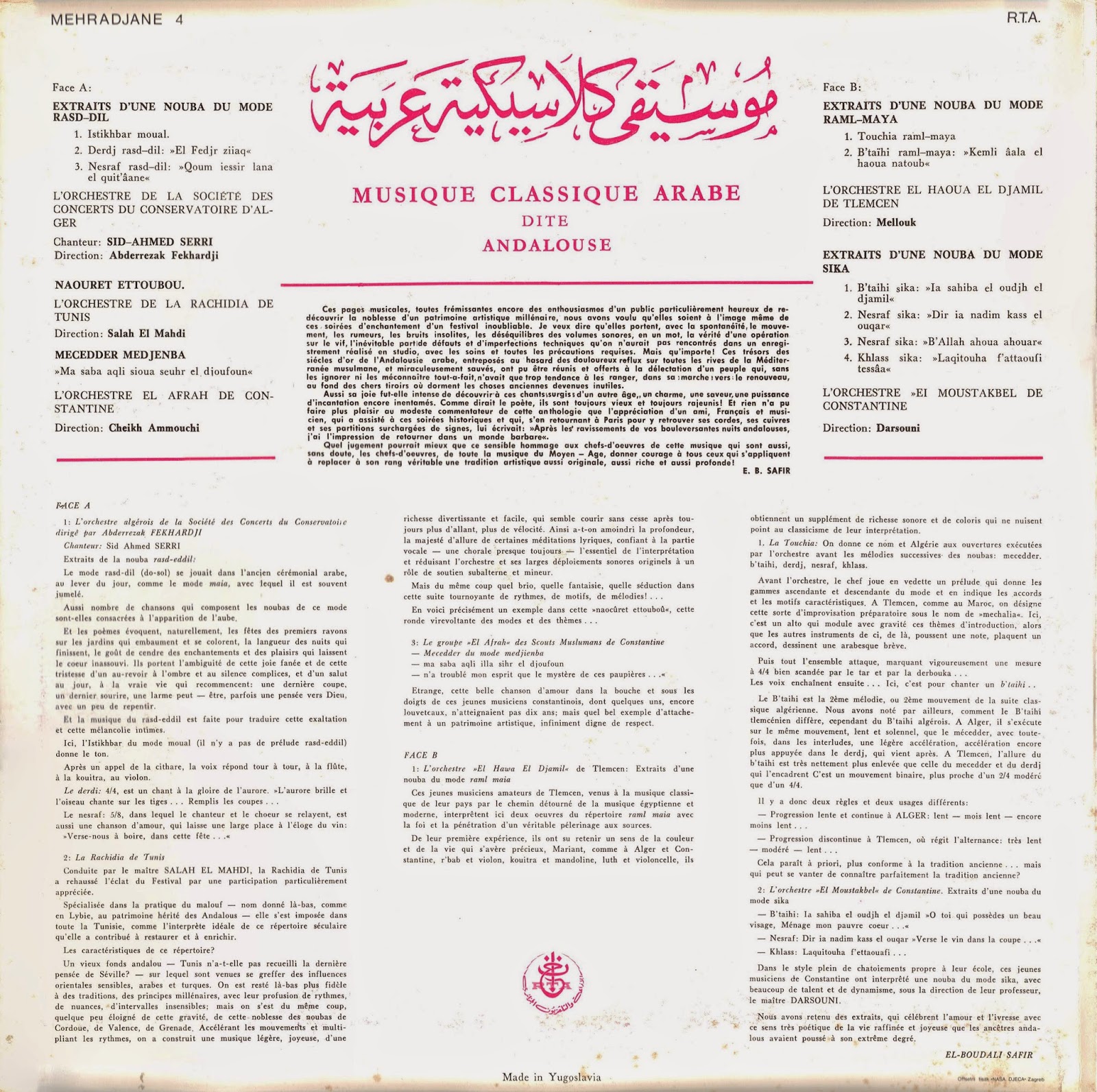 On Ahmed Serri see:
http://fr.wikipedia.org/wiki/Sid_Ahmed_Serri
Posted by Tawfiq at 19:37 1 comment: 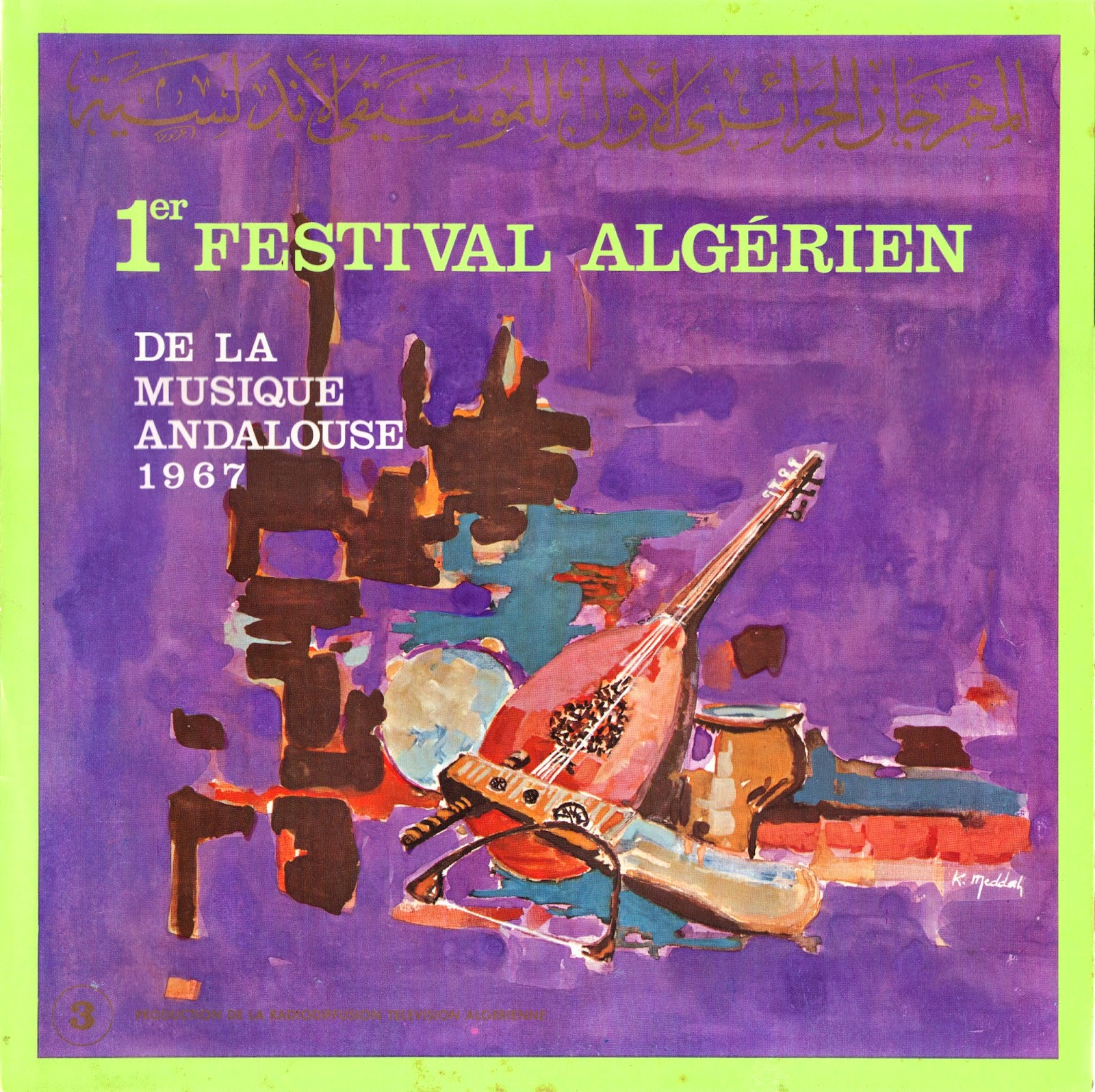 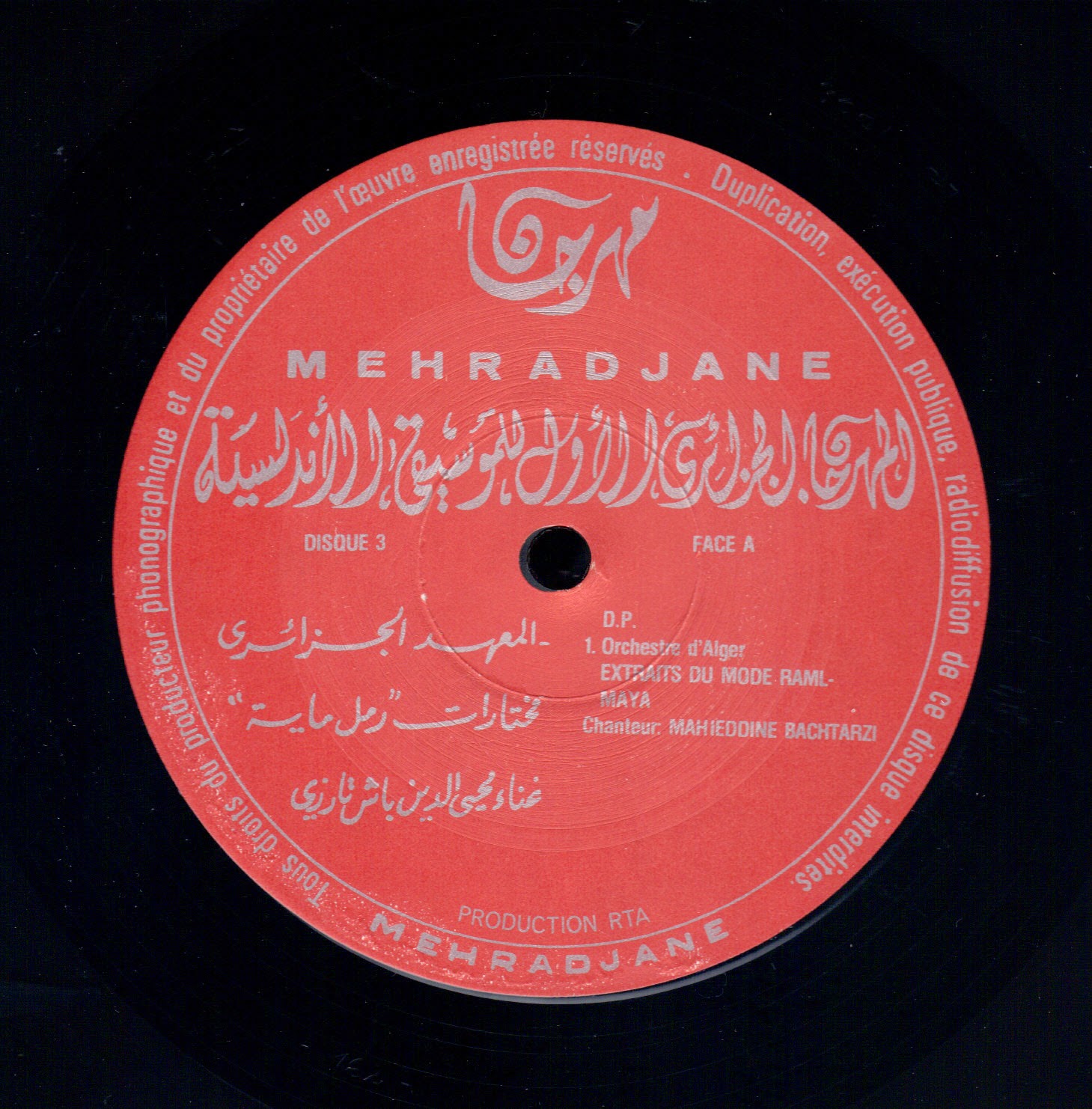 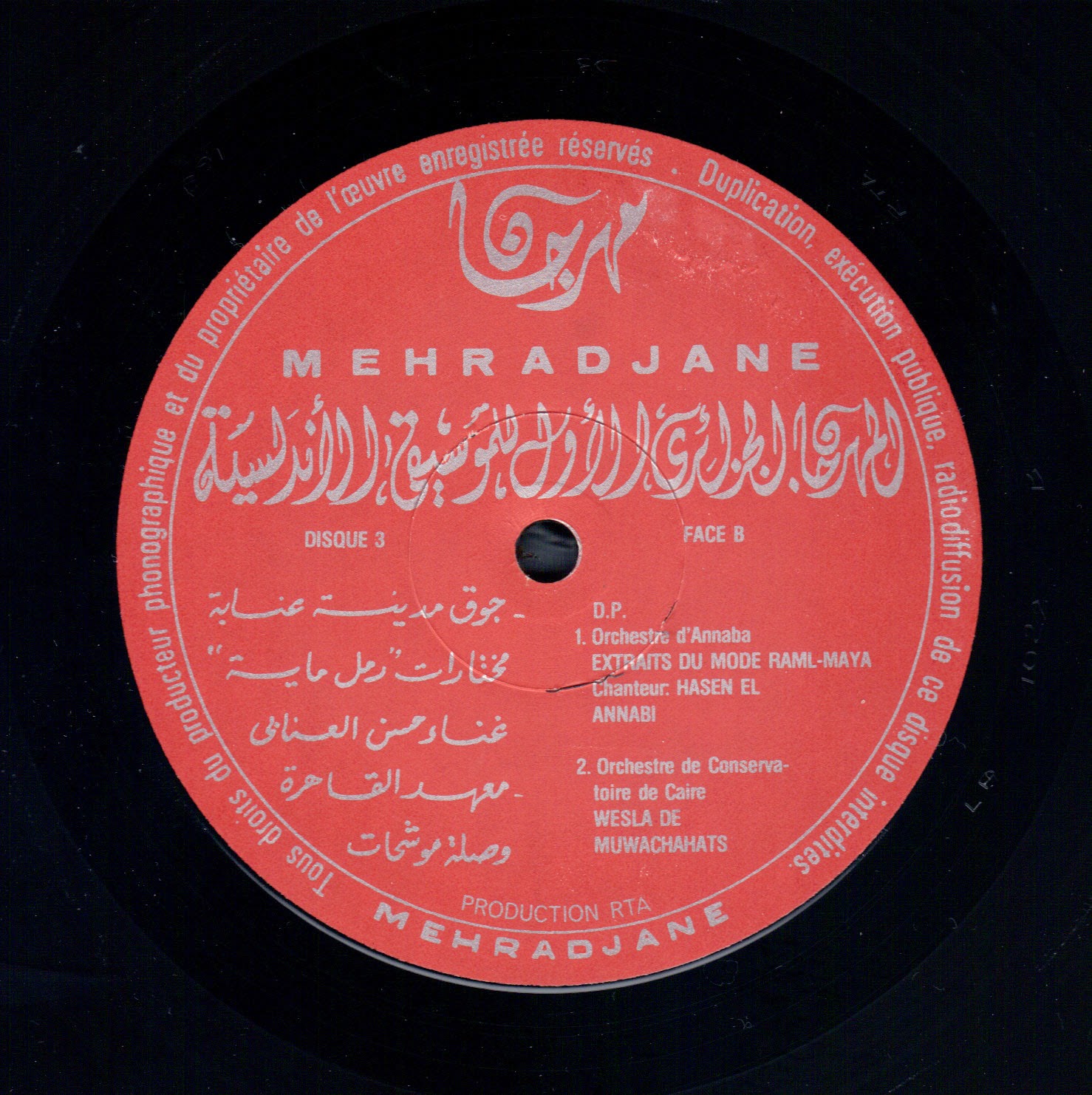 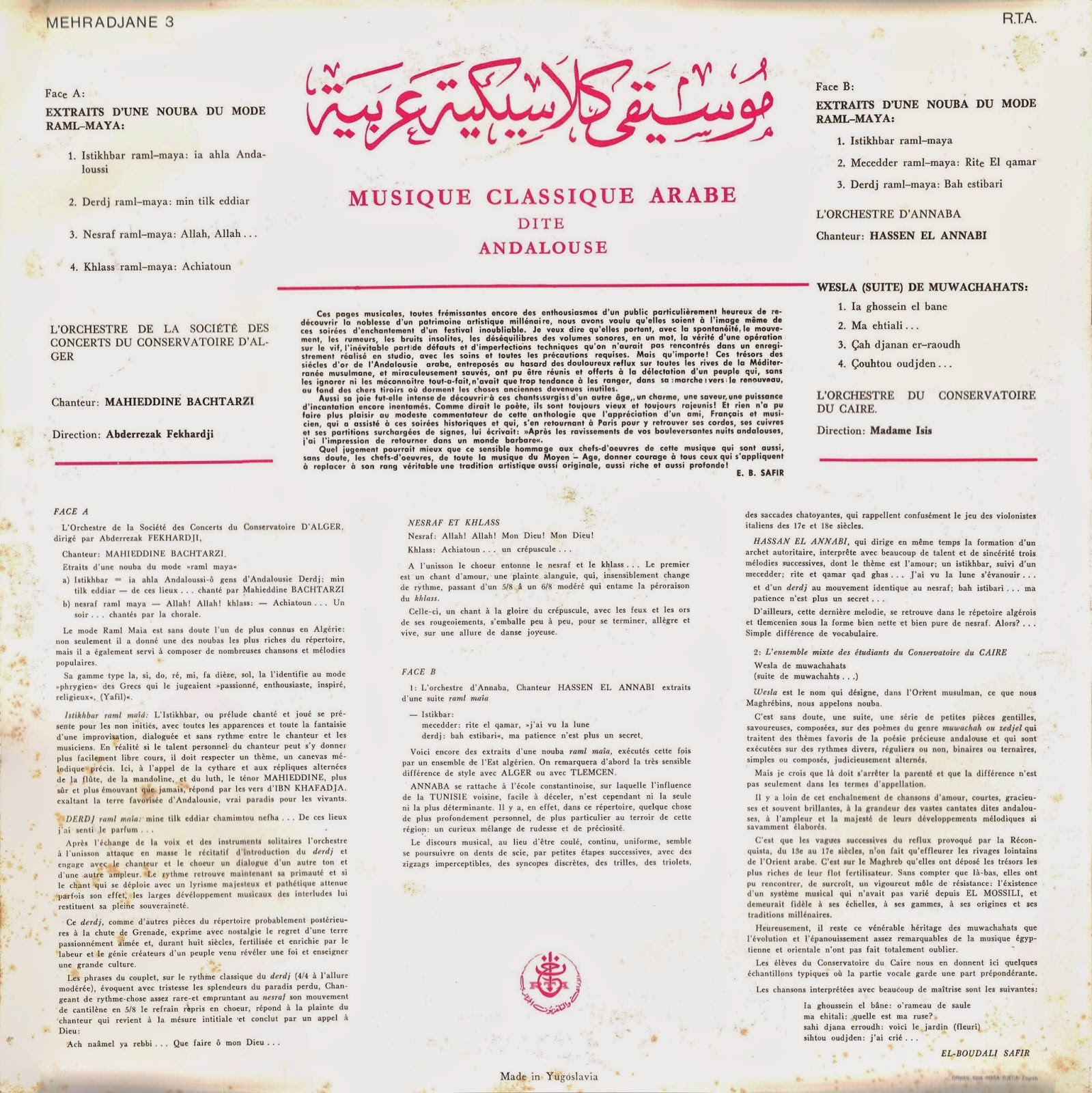 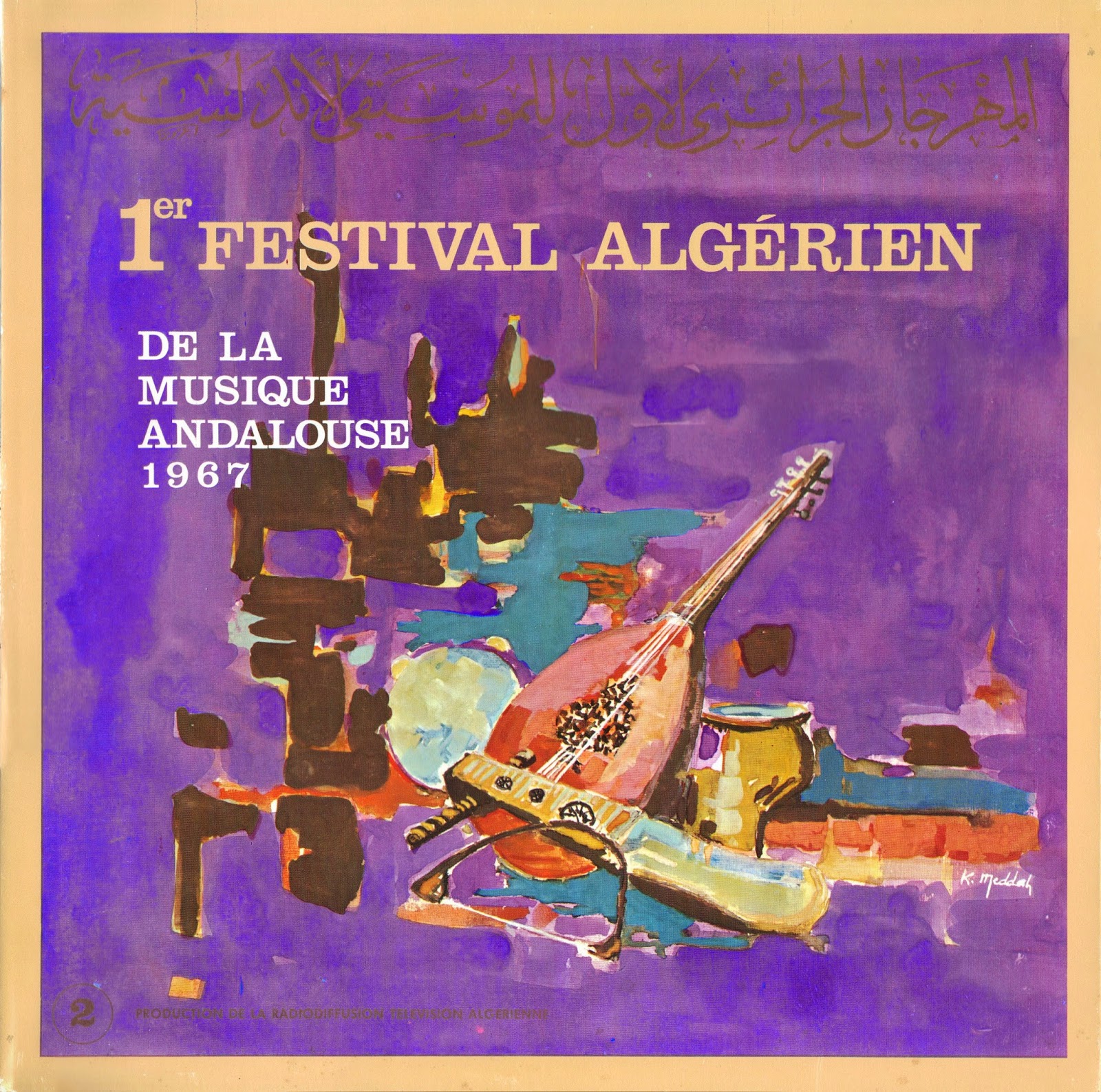 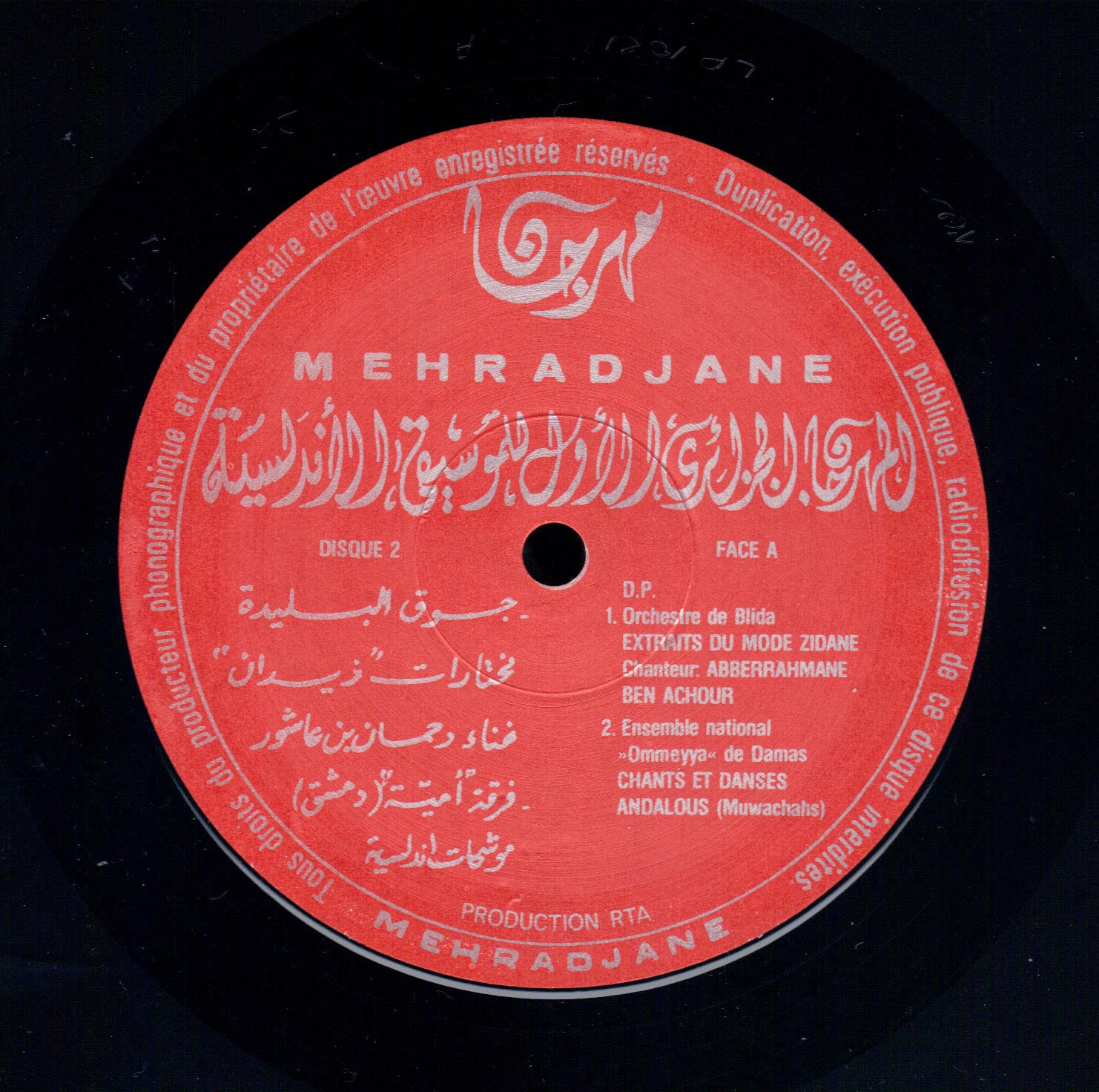 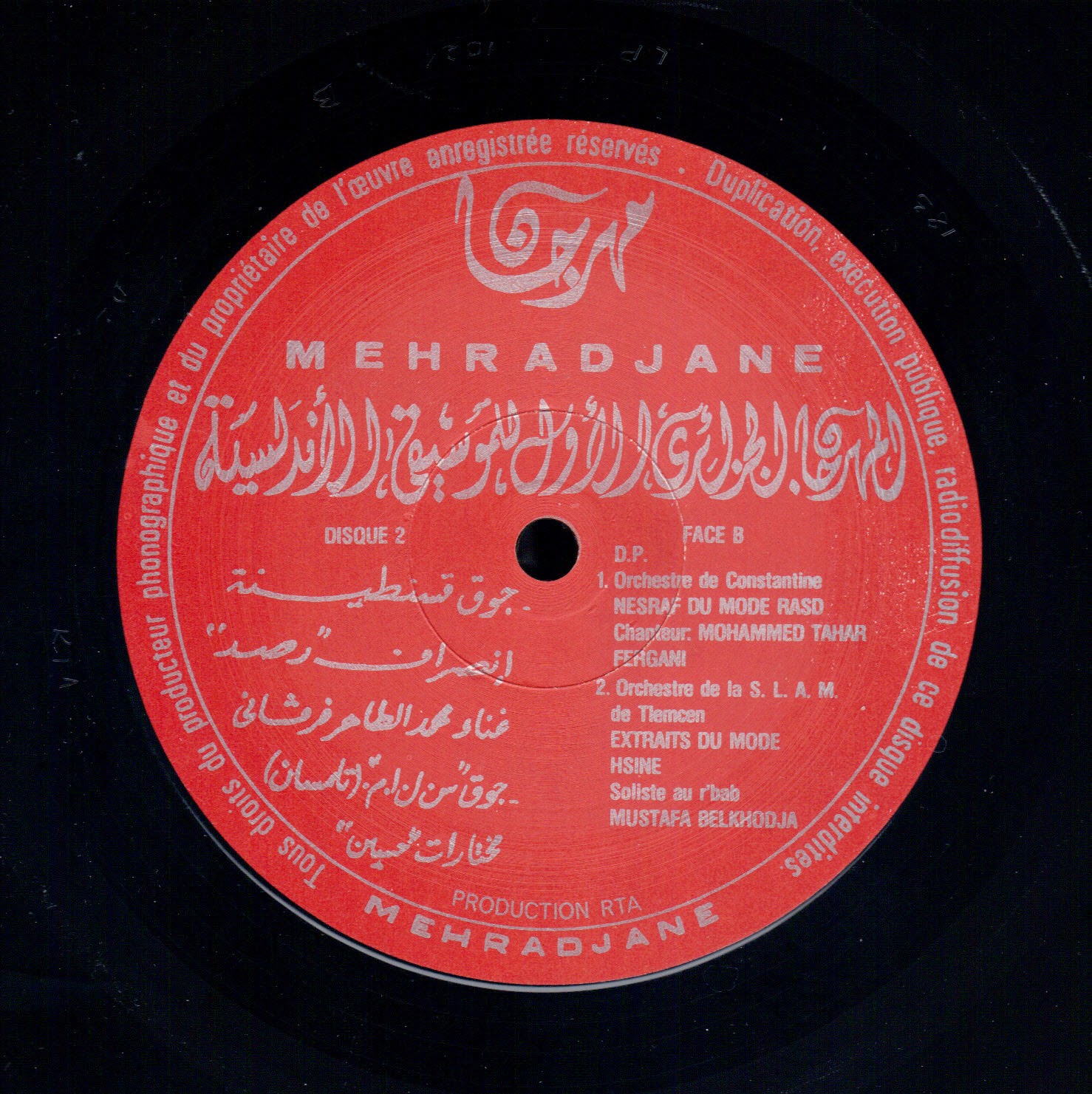 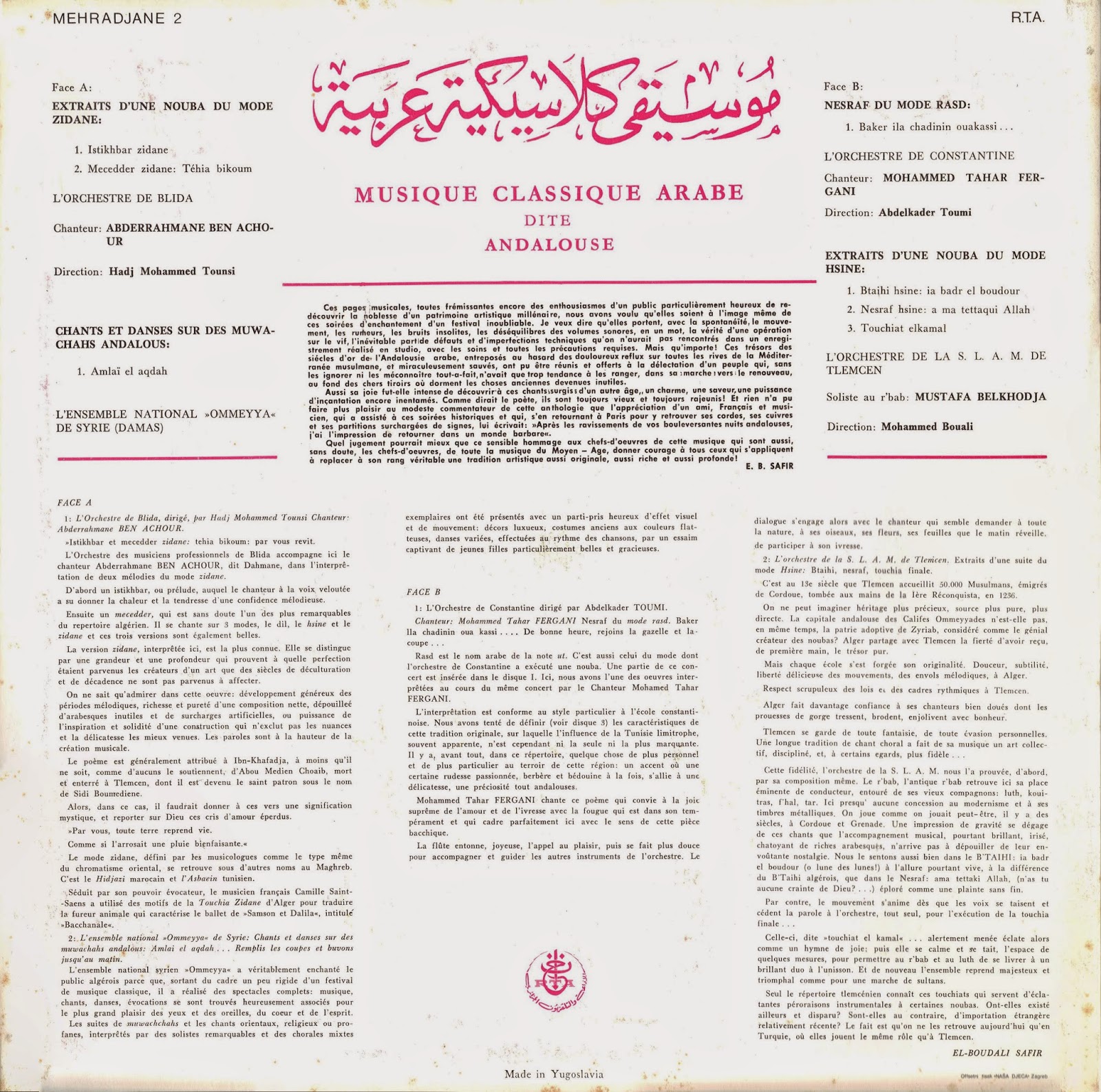 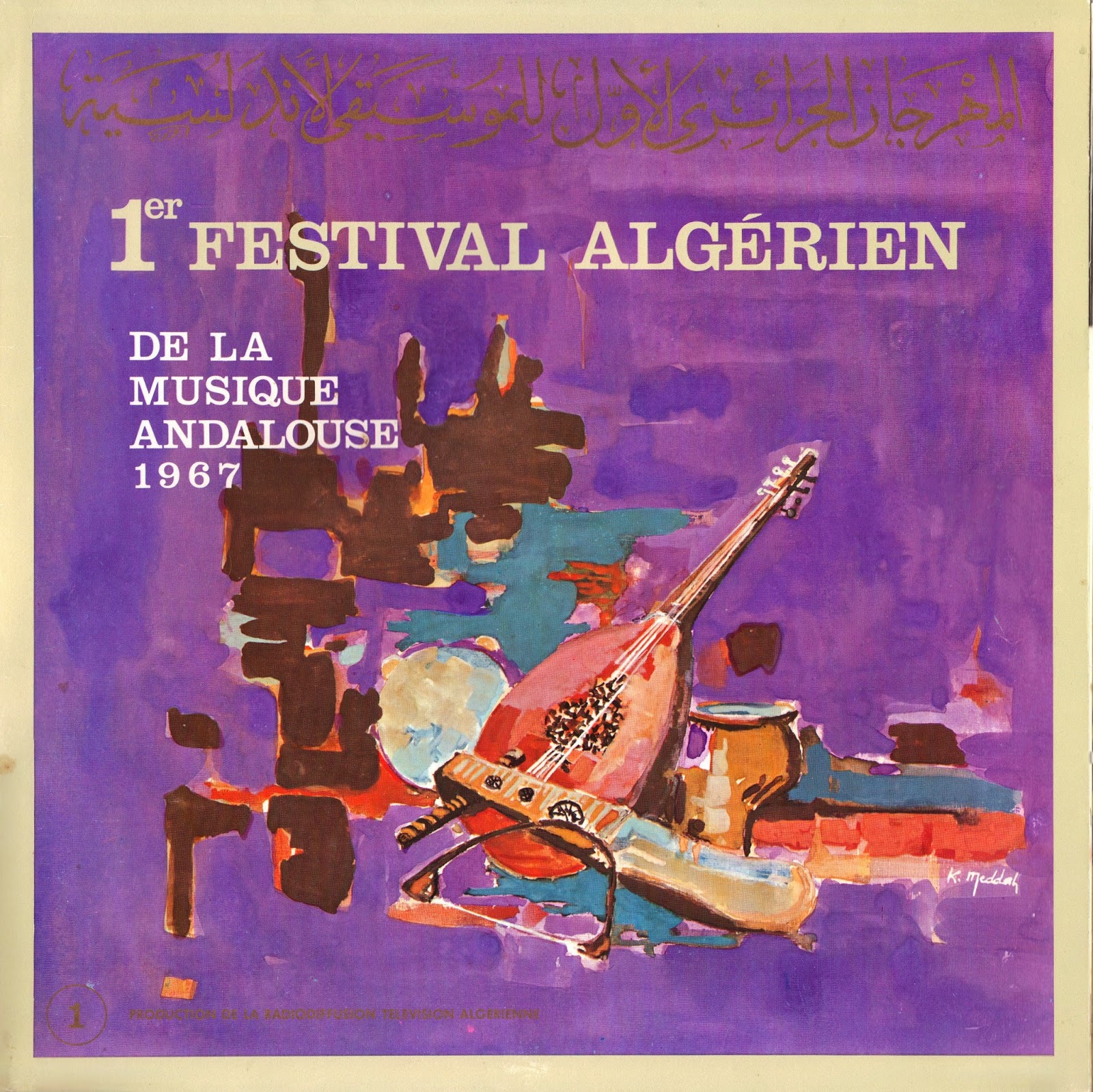 Here we post the 6 Volumes of the first Algerian Festival of Arabo-Andalusian music, which took place in Algiers in 1967. In May 2012 we had posted already volumes 7 to 12 of the "2ème Festival Algérien de la Musique Andalouse 1969" and in September 2011 three volumes of the "3ème festival de musique Andalouse - Alger 1972". 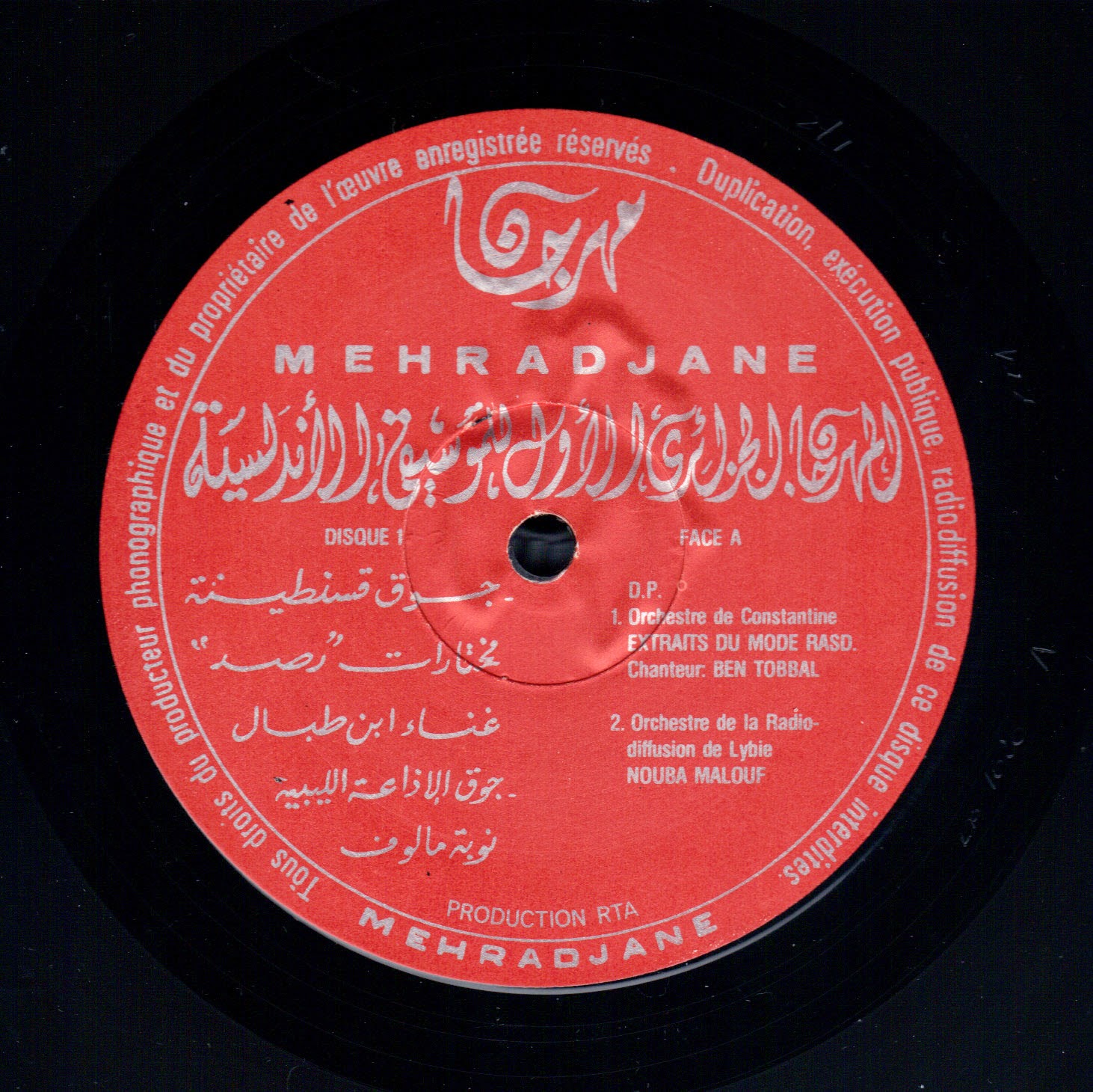 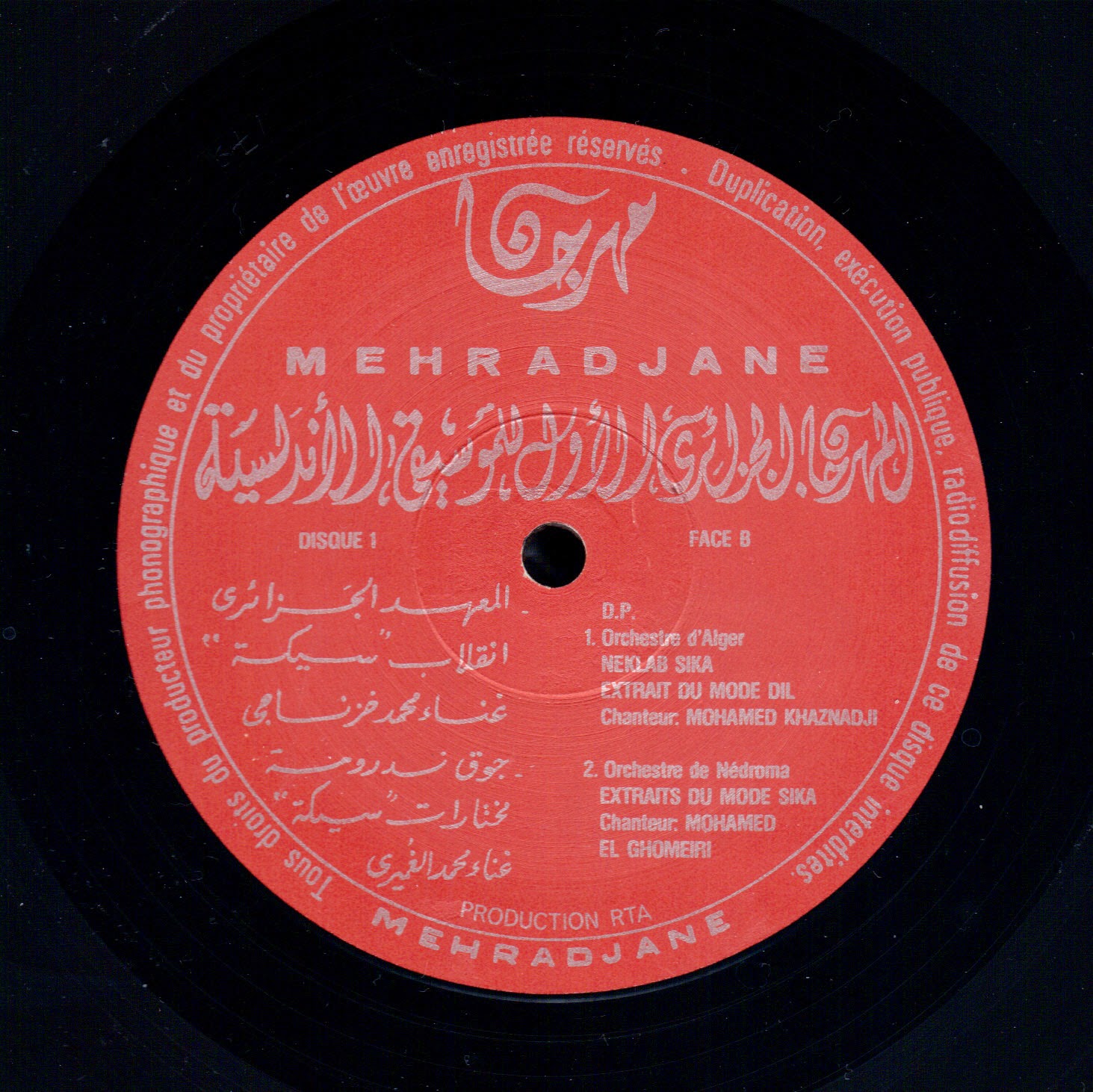 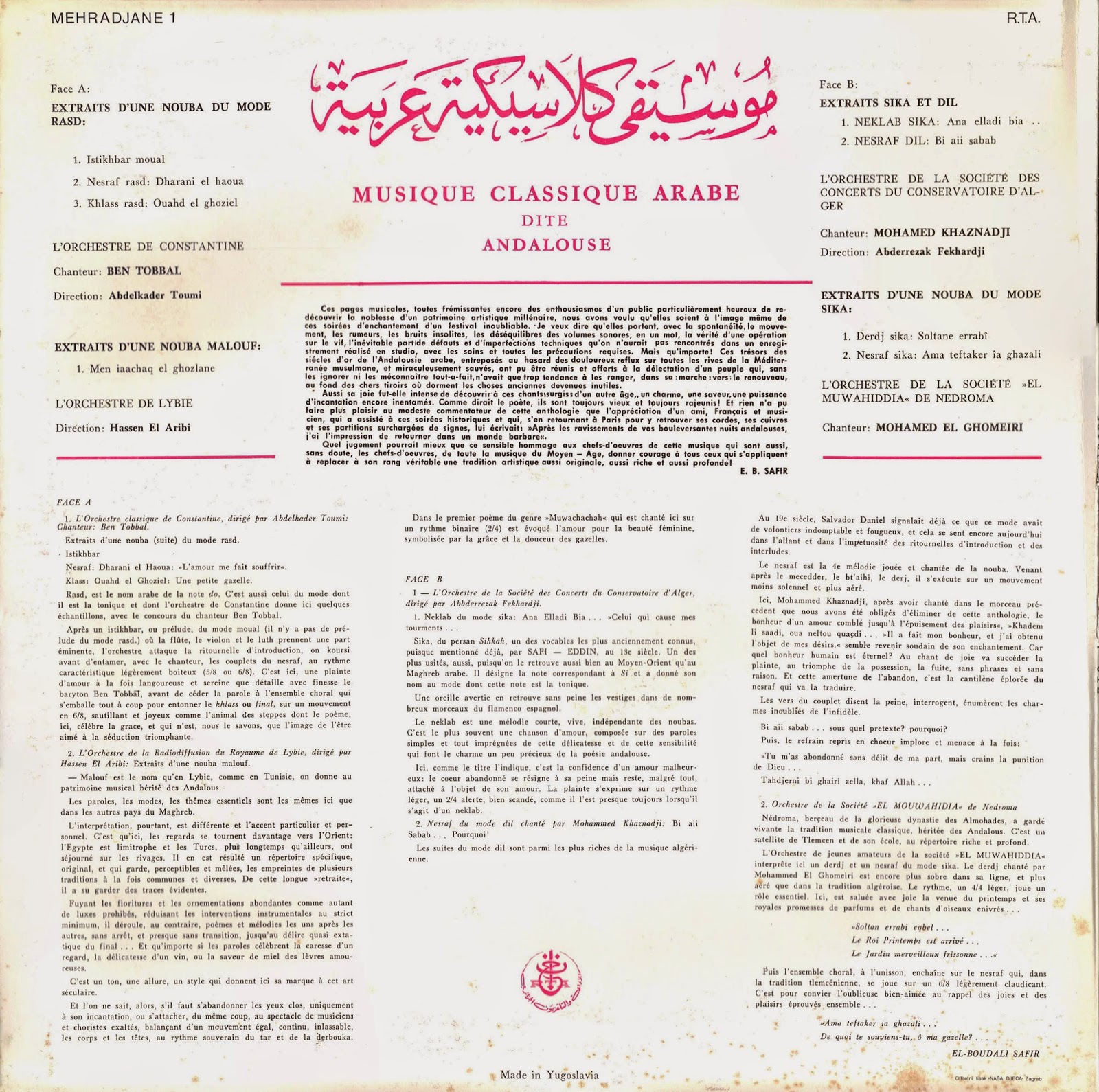 On Hassan El Aribi and the Malouf in Libya:

Hassan Uraibi (1933 - 2009; also spelled Arabi, Araibi, Araiby, or Oraibi) was a Libyan composer and one of the pioneers of Libyan music, performing Andalusian music known as Malouf. During his lifetime he has received many prestigious medals and awards, as well as chairing various positions in Libya and the Arab world, such as the Arabic Music Board and Libyan Music Festival.
He was born in 1933 in the Sough El Guima area of Tripoli. At a young age he moved to Benghazi and worked as an employee at Ministry of Transportation. He was soon discovered as a singer by Mohamed Sudagi who gave him an opportunity which he did not waste and joined the Music Department at Benghazi's radio station as an advisor. During this time Uraibi composed many songs for a number of Libyan and Arab singers, including: Mohsen Attia, and Egyptologists Suad Mohammed and Hoda Sultan. After returning to Tripoli, Uraibi founded his Malouf ensemble in 1964 with many well-known names at that time in Libya. He was named the first president of the Libyan music board in 1974.
Hassan Uraibi died in April 18, 2009 in Tripoli. His funeral was attended by a number of artists and cultural officials in the country. His death came as a shock to many Libyans who loved his timeless work.
Malouf (Arabic: مالوف‎ Ma'lūf) is a genre of music in the Andalusian classical tradition of Algeria, Libya and Tunisia after the Conquest of Spain in the 15th century. It was revived in the 1920s by the French musicologist Baron Rodolphe d'Erlanger. Though in its modern form, malouf is likely very dissimilar to any music played more than four centuries ago, it does have its roots in Spain and Portugal, and is closely related to genres with a similar history throughout North Africa, including malouf's Libyan cousin, Algerian gharnati and Moroccan ala or Andalusi. During the Ottoman era, malouf was highly influenced from Turkish music. Even now most of malouf examples are very similar to Turkish classical music. Malouf is played by small orchestras, consisting of violins, drums, sitars and flutes. Modern malouf has some elements of Berber music in the rhythms, but is seen as a successor to the cultural heights reached by Muslim Andalusia. Malouf has been called "an emblem of (Tunisian) national identity." Nevertheless, malouf can not compete commercially with popular music, much of it Egyptian, and it has only survived because of the efforts of the Tunisian government and a number of private individuals. Malouf is still performed in public, especially at weddings and circumcision ceremonies, though recordings are relatively rare. The term malouf translates as familiar or customary.
from: https://www.youtube.com/watch?v=JSO6wfBwtU8