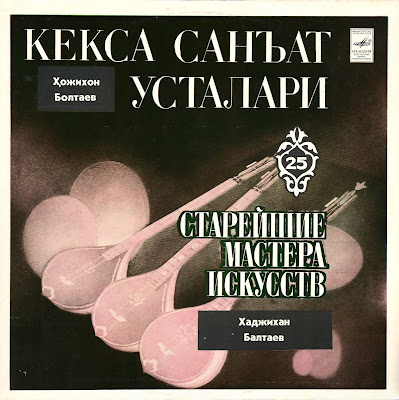 Here we present a LP by Xozhixon Boltayev (Xojixon Boltaev, Хожихон Болтаев), a great singer from Khiva, the old city in Khorezm in western Uzbekistan. The recordings were first published in 1967.
Xozhixon Boltayev was in the middle of the 20th century a great master of the Khorezm Maqoms called Alti-Yarim Maqom (six and a half Maqoms). This Maqom tradition is extremely poorly documented. My friend Danny brought from his trip to Uzbekistan a couple of years ago a book in English on this Maqom tradition, in which our singer is mentioned extensively. I read this very interesting book. In the internet one can find information on this tradition here. But after all the reading I did I still don't know for sure if the music on this LP corresponds more or less to this Maqom tradtion or at least to certain aspects of it or not. I guess it does.
I see that in the Russian liner notes the words Khorezm Makom are mentioned. Perhaps someone is able to translate the Russian liner notes.
Here the only recordings I could find in the interenet named as being examples of Khoresm Maqoms: https://www.youtube.com/watch?v=ZeLgmn17o6g. There are in total six examples.
Another singer from Khiva, slightly younger than Xozhixon Boltayev, is Komiljon Otaniyozov (1917-1975). He also has a relation to this Maqom tradition. We posted in 2012 two LPs by him. See here.

Additions and corrections added on 5th of March 2017:
Here the track information of this LP in transcription and translation:
Yakparda suvora (folk music - A. Navoy); Savty yakparda suvora (folk music - Bayaky); Kushparda suvora va savty kushparda suvora (folk music - Ahakhy); Ka-zhanh suvora (folk music - Devony); Chapandozy suvora va savty chapandozy suvora (folk music - Makhramy, Mashrab).
The names in the brackets are the poets of the songs.
The artist accompanies himself on Tar and is accompanied by Akhmad Ysmaylov on Doyra (frame drum). Recorded in 1967. «Stareyshye mastera yskusstv Uzbekystana» (Old Masters of Arts of Uzbekistan), vypusk 25 (volume 25).
As we see from the track information all songs belong to the genre "Suvora" which are spiritual (Sufi) songs, apparently performed in a style close to Maqom music. In the booklet to the CD "Uzbekistan - Music of Khorezm", published in the Unesco Series from Auvidis and now available from Smithsonian as a download in mp3 & flac formats including the booklet (UNES08269) (see here), the two musical forms of Suvora and Maqom (classical music) are explained. There are also 3 pieces of Maqom music and one Suvoro on the CD. The booklet can be downloaded for free. 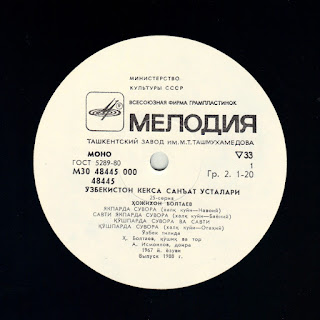 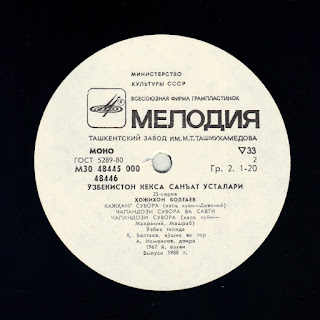 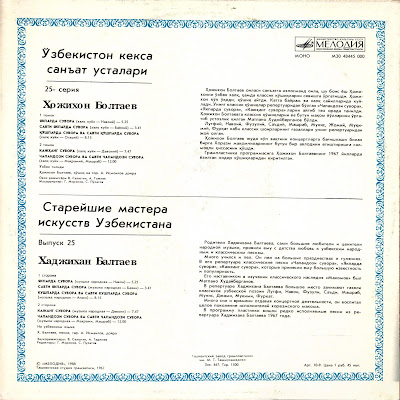 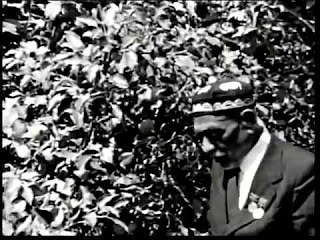 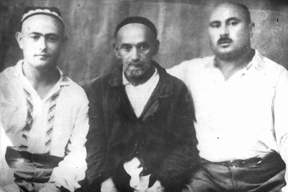 The man in the middle - I guess - is Xozhixon Boltayev, the man on the right Komiljon Otaniyozov.
Posted by Tawfiq at 18:49 3 comments: 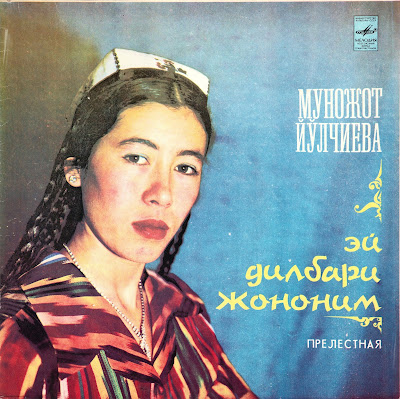 Munajat Yulchieva is outside of her country the best known traditional singer from Uzbekistan. She toured extensiveley worldwide. I saw her in concerts in Germany: Hamburg, Frankfurt, Cologne and in Holland and Belgium. Unfortunately she has only very few CDs: one on the French Ocora label (1994), one on the German Network label (1997), one published in Uzbekistan, which was sometimes sold at her concerts. There was also a beautiful DVD published in France containing a concert in Paris and a documentary.
I think even in her homecountry she doesn't have a lot published. This here is the only LP I know of (but there might be several more). In the near future I will post an Uzbek MP3-CD by her. I also have a broadcast of a complete concert in Frankfurt from 1998. This I might also post one day.
On the artist see:
http://munojot.com/
http://www.zamanproduction.com/en/artist/munadjat-yulchieva
https://en.wikipedia.org/wiki/Munojot_Yo%E2%80%98lchiyeva 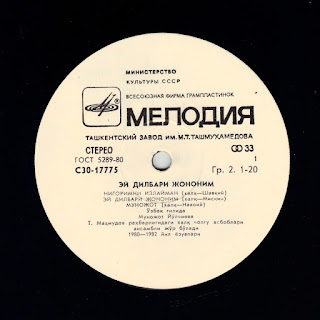 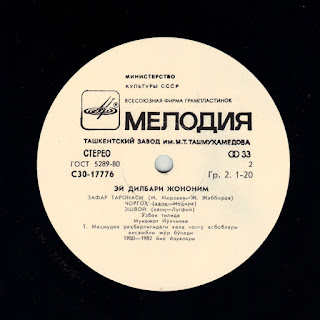 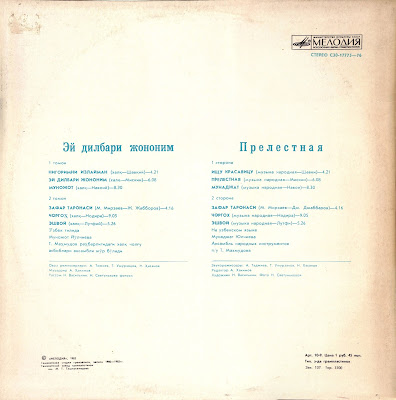 Here a professional translation of the track information, commissioned either by the former owner of the LP or the dealer from whom I bought it. 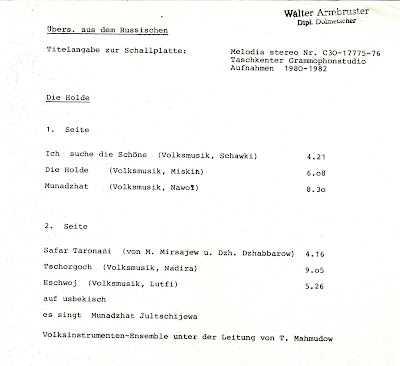 Classical Music of Iran - LP published in 1982 in Japan 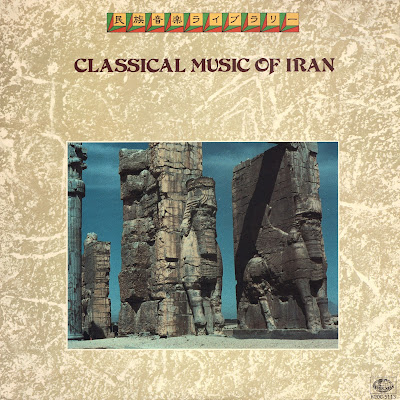 Here the second Japanese LP from 1982, which we bought recently from Japan. See our previous post.
Here we have a LP with very beautiful recordings by some of the greatest musicians and singers of classical Iranian music of the last decades: the great singers Parisa and Seyed Noreddin Razavi Sarvestani and instrumentalists like Mohammad Mosavi (Ney), Jalal Zolfonun (Setar) and in the ensembles accompanying the singers greats like Hossein Alizadeh, Parviz Meshkatian and others.
Parisa is one of the greatest female singers of Iran since the 1970s. See our post of a cassette here.
Seyed Norreddin Razavi Sarvestani was one of the greatest Radif masters of recent times. See more below in the description of a CD set. Unfortunately there are not many CDs by him. In the 1990s I saw him perform in Holland together with the great Tar and Setar master Dariush Tala'i.
This LP was republished on CD in 1988 in a series I also had never heard about till very recently. See: https://www.discogs.com/sell/release/6243456?ev=rb. 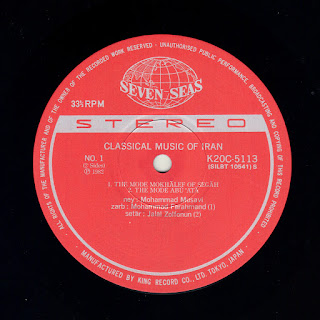 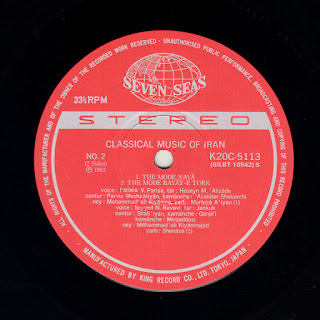 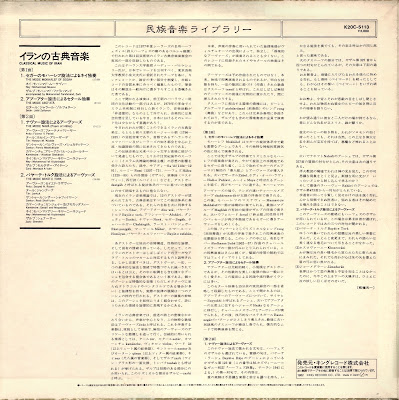 These excellent CDs are available from info@raga-maqam-dastgah.com: 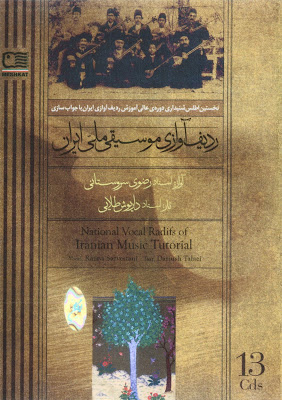 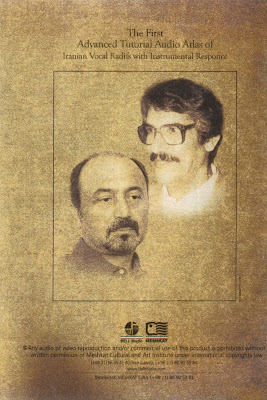 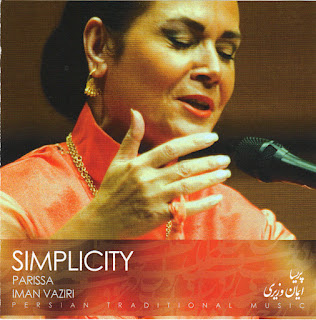 There are many CDs available by Mohammad Mosavi, Jalal Zolfonun, Hossein Alizadeh and Parviz Meshkatian.
Posted by Tawfiq at 11:36 1 comment: 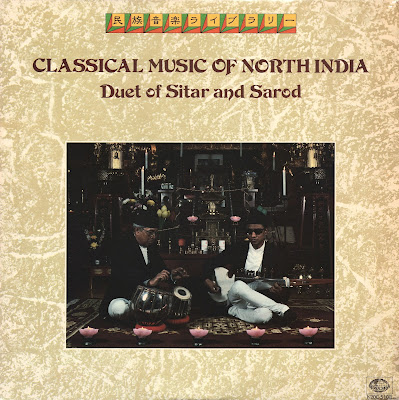 It seems that in Japan quite a number of LPs (and also CDs) were published which hardly ever made it to Europe and probably also not to the US. Here we will post two LPs from 1982 which we recently bought from Japan. It seems that they were never republished on CD.
Even in the Seven Seas Discography on Discogs only 5 LPs are listed from this ethnic series which should have at least 26 volumes and none of the two we post here.

The musicians on this LP are from Nepal. The Sitar and the Tabla players appear on a CD published in 1996 in Nepal. On the Sarod player see here. He has a CD on the French label PlayaSound. Sambhu Prasad Misra, the Tabla player, seems to be known by connoisseurs. There is a very interesting article on him here. He passed away on 12th of march 2002.
Perhaps among the readers of this blog there is someone who knows Japanese well enough to give us a translation of the liner notes or at least the essence of it. 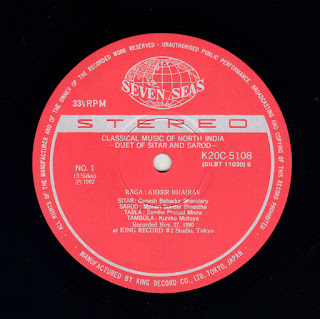 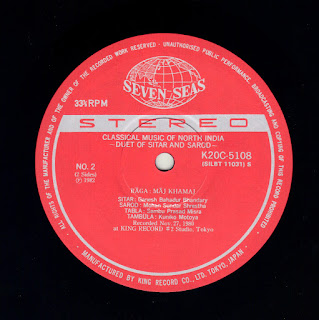 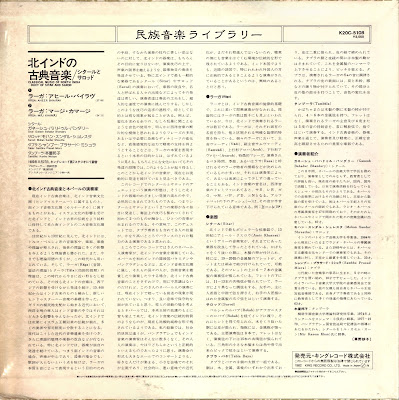 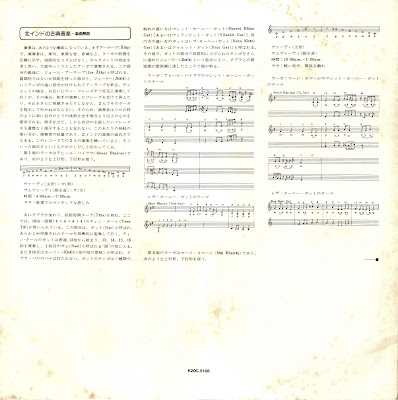 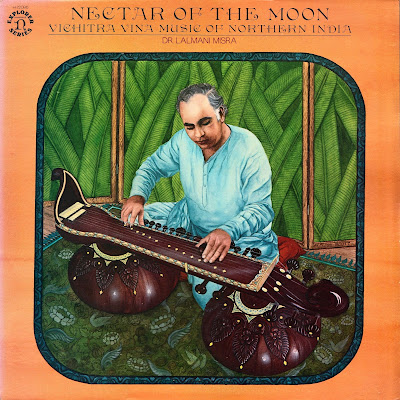 We hesitated first to post this LP as the label had plans to republish it on CD. But this project seems to have died already years ago, probably because of lack of interest by the public. A very beautful LP which was for a while, when it first came out, one of my favourite LPs. It was one of the very first LPs devoted to the Vichitra Veena ever to be published. There were only two earlier Vichitra Vina LPs, both published in Pakistan.
We had already in 2011 posted a cassette by the musician (see here). Our other Vichitra Vina posts see here. 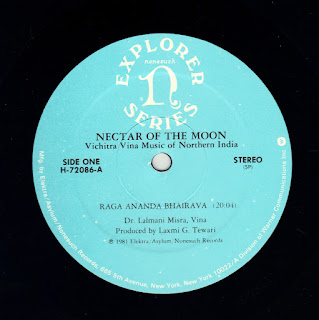 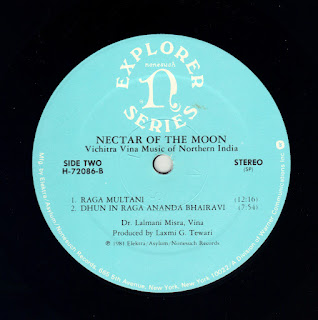 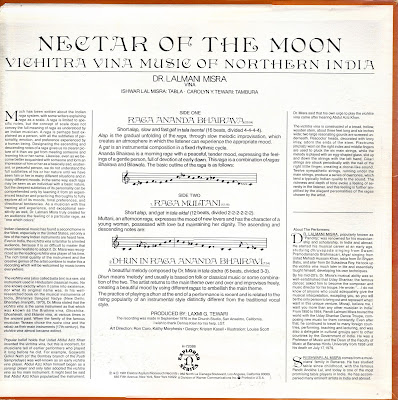 On the musician see:
https://en.wikipedia.org/wiki/Lalmani_Misra
http://www.omenad.net/page.php?goPage=%2Farticles%2Fhoneybuds.htm
Posted by Tawfiq at 15:07 7 comments: