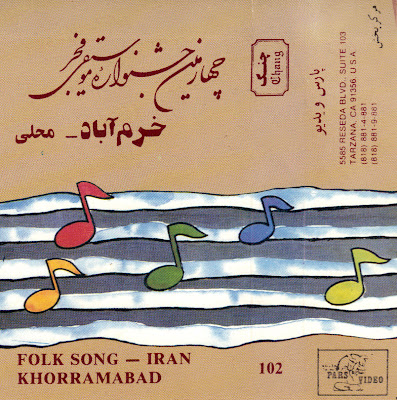 Beautiful recording of regional music from Lorestan. The folk music of Lorestan is mainly played on Kemencheh and Tombak. Both instruments are played here very differently from their use in classical Iranian music. On the second side one hears also an 'Ud (or Barbat). Good singer, good musicians. American edition of a cassette originally published in Iran.

"Khorramabad (Persian: خرم آباد‎ - Khorram Abād, Luri: خورمووه - Xormuve; also Romanized as Khorramābād, Khoramabad, Khurramabad, Khorram Abad and Khur Ramābād) is a city in and capital of Lorestan Province, Iran. At the 2006 census, its population was 328,544, in 75,945 families. Khorramabad is situated in the Zagros Mountains. The city population is predominantly Lur and Lak, although the two groups are closely related."
from: http://en.wikipedia.org/wiki/Khorramabad 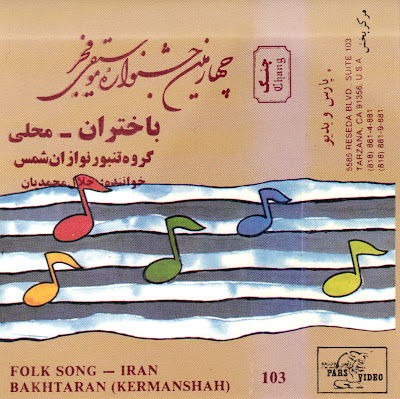 Another beautiful recording by Seyed Jalaleddin Mohammadian, named here Jalal Mohammadian.  Accompanied by Tanburnavazan Shams, an ensemble of Tanbur and Daf players. A while ago we had posted another cassette by the same singer accomapnied by the same ensemble. See here. American edition of a cassette originally published in Iran.

"Kermanshah Province (Persian: استان كرمانشاه‎, Ostān-e Kermānshāh ) is one of the 31 provinces of Iran. The province was known from 1969 to 1986 as Kermanshahan and from 1986 to 1995 as Bakhtaran."
from: http://en.wikipedia.org/wiki/Kermanshah_Province
Posted by Tawfiq at 17:33 1 comment:

Folk Music from Zahedan, Sistan and Baluchestan province, Iran - Cassette published in Iran end of 1980s or beginning of 1990s 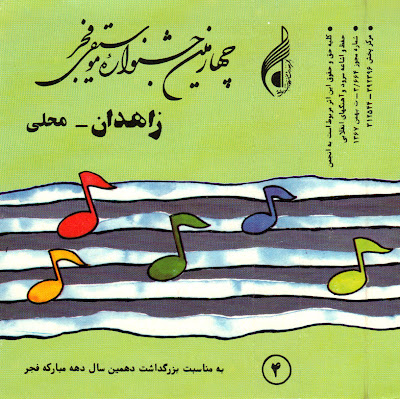 "Zahedan (Persian: زاهدان‎, also Romanized as Zāhedān, Zahidan, and Zaidān; also known as Zāhedān-e Yek; formerly known as Dowzdāb, Duzdāb, and Duzdāp) is a city in and the capital of Sistan and Baluchestan Province, Iran. At the 2006 census, its population was 552,706, in 109,488 families. "Zahedan" is the plural of the Arabic word zahed meaning 'pious'.
Zahedan is located near Pakistan and Afghanistan, only about 41 km south of the tripoint of the borders of the three countries, at an altitude of 1,352 meters above sea level and at a distance of 1,605 km from the Iranian capital of Tehran. The most famous tribes in Zahedan include the Keikha, Shahraki, Mir, and Birjandi.
The Demographics of Zahedan's inhabitants are largely ethnic Baluchi who speak the Baluchi language and Sistanis who speak Persian sistani and yazdi, khorasani. There are also smaller numbers of Brahuis and Pashtuns.
Zahedan lies east of the Kavir-e Loot desert. The city was part of the historic region of Sistan (Persian: سیستان), situated today on the borders of southeastern Iran and southwestern Afghanistan. One portion is part of the Iranian province of Sistan and Baluchestan. The other portion is part of the Nimruz Province of Afghanistan."
from: http://en.wikipedia.org/wiki/Zahedan
Posted by Tawfiq at 08:19 1 comment: 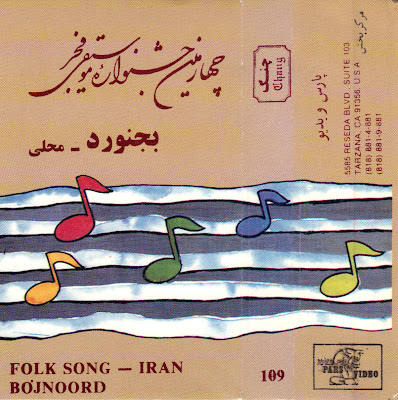 
Beautiful recordings of music from Bojnoord in North Khorasan. Mostly bards (Bakhshis) accompanying themselves on the Dotar. American edition of a cassette originally published in Iran. See here a cassette of Turkmen music from the same festival we posted recently.

"Bojnurd (Persian: بجنورد) is the capital city of North Khorasan province, Iran. It is about 701 km from Tehran. At the 2006 census, its population was 172,772, in 44,217 families. It is also spelled Bojnūrd, Bujnūrd, Bojnoord or Bujnurd.
The city is quite famous for its multicultural background. Many people speak at least 2 different languages including Persian, Tati, Khorasani Turkic, Kurmanci Kurdish, and Turkmen. Intermarriage between said ethnic groups is common.
The city is famous for its Turkmen horses and professional horse training centers. People from all over the world often come over to visit these highlights."
from: http://en.wikipedia.org/wiki/Bojnord
Posted by Tawfiq at 14:16 2 comments: 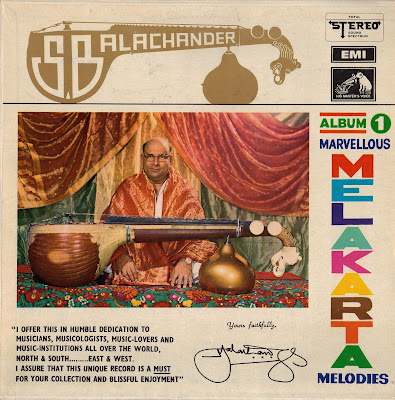 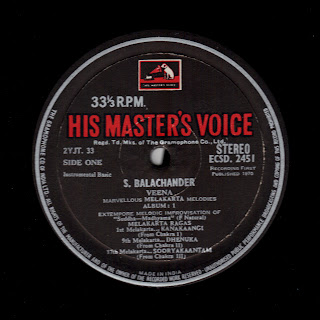 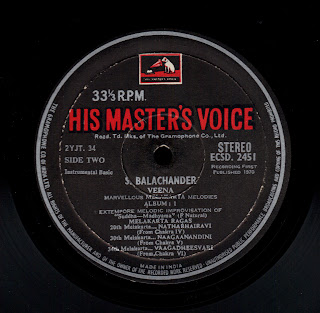 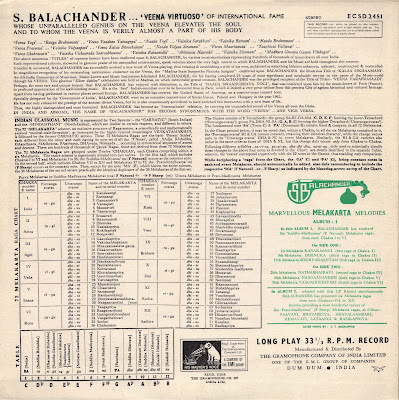 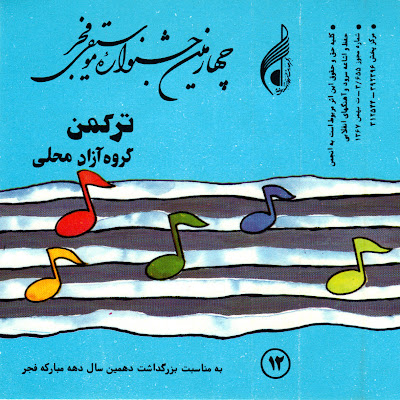 Turkmen music from the Iranian part of Turkmenistan. This cassette contains music of Bakhshis (bards) accompanying themselves on Dutar and accompanied on Gidjak, a spike fiddle called in Iran and Azerbaijan Kamancheh.

"The Turkmens reside in the north of the (Iranian) province Golestan, a plain called Turkmen Sahra. This former nomadic people live in this area from 15th century, main cities of which are Gonbad-e Kavus and Bandar Torkaman."
http://en.wikipedia.org/wiki/Golestan_Province

Here some more Turkmen music from the former Soviet Union:
http://zhuzhulingo.blogspot.de/search/label/Turkmenistan
Posted by Tawfiq at 09:44 4 comments: 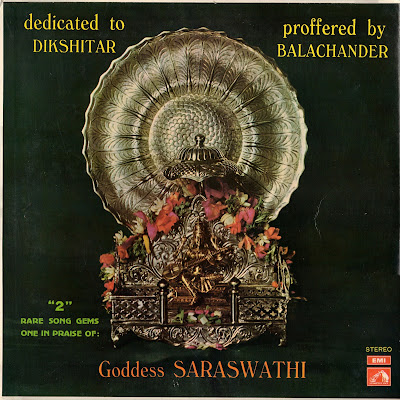 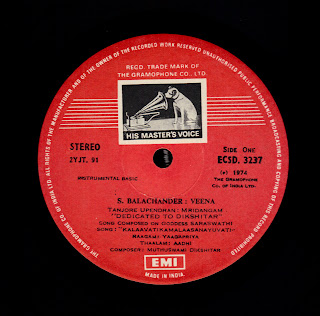 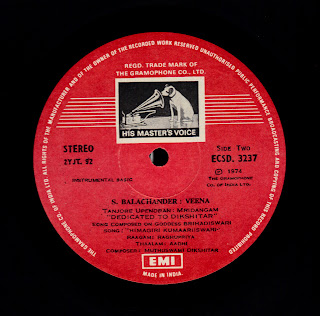 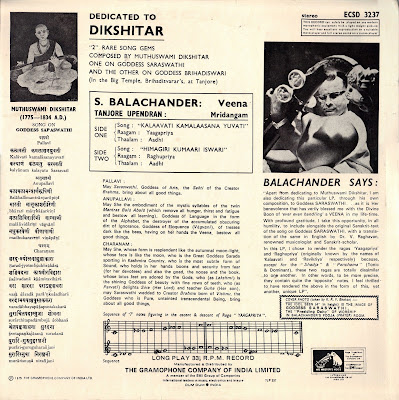 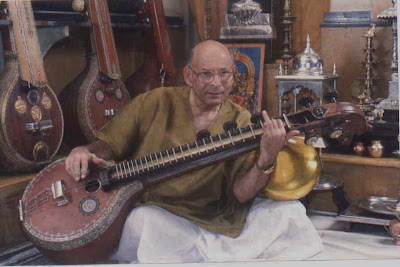