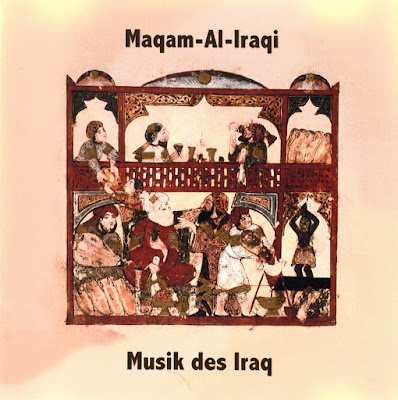 Here our second post in our series of recordings of the Maqam music of Iraq. Here we have longer Maqam suites which give a much better impression of this great musical tradition.
Many thanks to our friend KF who recorded these broadcasts, made a double CD out of them and created the covers. Many thanks for sharing them generously. 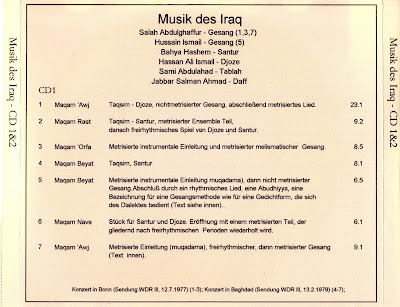 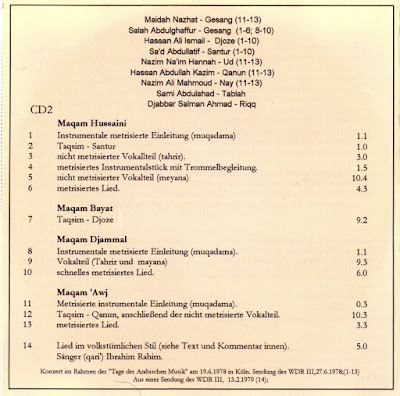 Arabian Music in Baghdad - LP published in Japan in 1980 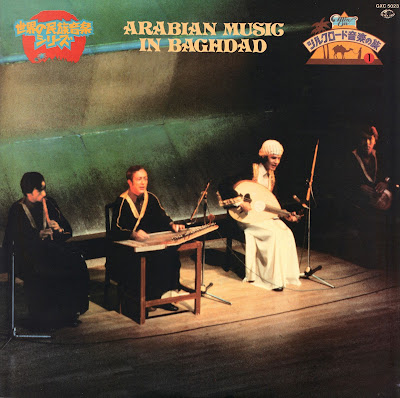 With this LP we start a series of three posts of the Maqam Music of Iraq - Maqam al-Iraqi. In 2011 we posted already an LP having a recording by the same singer as on this LP here. See here.
Iraqi Maqam is one of the great Maqam traditions. In some respects it has some affinities to the Mugham music of Azerbaijan and to Dastgah music of Iran, but it is for sure through and through Arabic. I discovered this music in the first half of the 1970s with the legendary LP "Iraq - Makamat - L'Ensemble Al Tchalghi Al Baghdadi et Yusuf Omar" which we will post here as the third post in this series. For a long time there were hardly any other recordings available.
Here on this LP - which to my knowledge was never distributed in Europe or the US - we have mainly the lighter and more vivid and shorter pieces which in a performance are played usually towards the end. In the next two posts we will have the serious longer Maqam performances. Here the singer is also accompanied by a Takht ensemble as it is used normally in Maqam music in Egypt and other Near Eastern countries. In Iraq this a more recent development. Normally the Maqam music is accompanied by the Chalghi Al Baghdadi ensemble consistung of a Santour player, a Djoze player and two or three percussionists, as we will have it in the next two posts.
The singer on this LP is Salah Abdel Ghafour (1952-2012). In the 1970s he toured quite frequently also outside of Iraq. In our next post we will have three broadcasts with him from 1977, 1978 and 1979 done by the WDR in Cologne, Germany.
Later he seems to have turned more into a singer of popular music.
"Iraqi artist Salah Abdel Ghafour was killed in a road accident in the Iraqi city of Irbil on Sunday evening, April 7, 2012. A medical source said the late singer was injured and hospitalized following a road accident, and passed away at the hospital. Salah Abdul Ghafour was born in 1952 in Al Saadiya district in Diyala Province in Iraq. He was of Kurdish origin. Abdul Ghafour applied to the TV and Radio auditions in 1961 via the program "Rukn Al Huwaa" (Amateurs' Corner), he was only 8 years old at the time. He rose to fame by singing the songs of renowned Iraqi artist Nathem Al Ghazali. In 1973, he joined the National Troupe for Folklore Arts, and later became a member of the Iraqi Inshad Troupe. For the next four years, he participated in a number of festivals and celebrations in Iraq and abroad. In 1977, he joined the Institute of Musical Studies as a student, where he specialized in the Iraqi Maqam and in playing the violin. Six years later, he graduated from the institute and joined the Iraqi Musical Heritage Troupe, founded by the late Mounir Bashir, whereby he took part in many Arab and international festivals and concerts. The song he is most famous for is "Helwa Yal Baghdadiya" (Pretty Baghdadi Girl), the music of which was composed by Nathem Naeem. Some of his most popular hits include "Mou Beedaya" (Out of My Hands), music by composer Mohamed Noushi; "Ridt Ansak" (I Wanted to Forget You), music by composer Farouq Hilal; "Kulman Yahin Lahla" (Whoever Yearns for their Family) and "Khasartak Habibi" ( I Lost You My Darling), music by composer Jaafar Al Khafaf. Song artist Salah Abdul Ghafour made more than 30 albums and 300 songs, including the Iraqi Maqam and Iraqi heritage songs. In addition, he had many national and love songs. Many artists performed his songs, the most famous of which is veteran Turkish singer Ibrahim Tatlises, who performed the song "Shlonak Ainy Shlonak" (How are you my love?). Abdul Ghafour's most famous hits include "Helwa Yal Baghdadiya" (Pretty Baghdadi Girl), "Khasartak Habibi" ( I Lost You My Darling), "La Tulomony" ( Do Not Blame Me), "Anta Al Ghaltan" (You Are Mistaken), "Kul Yom Lak Mee'ad" ( You Have a Time Every Day) and "Il'ab Yal Asmar" ( Play You Dark-toned One)."
From: http://www.alowaisnet.org/en/news/slahairaq.aspx

A blog devoted to Iraqi Maqam with many many historical recordings:
http://iraqimaqam.blogspot.de/ 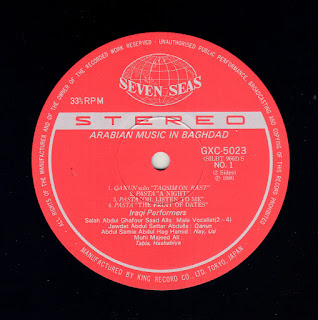 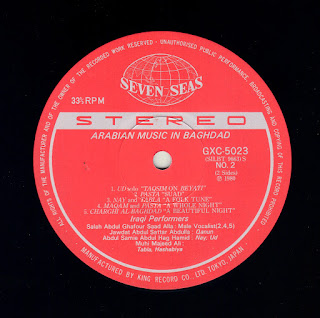 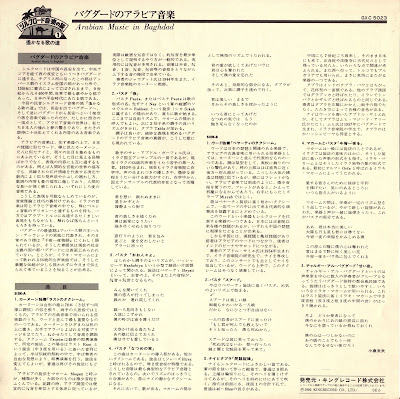 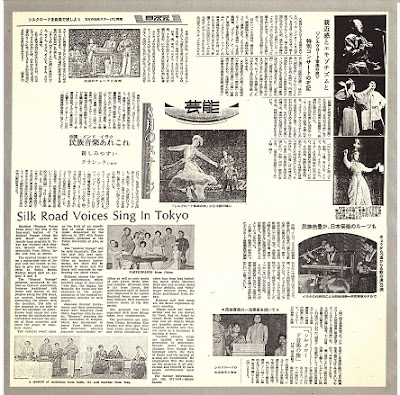 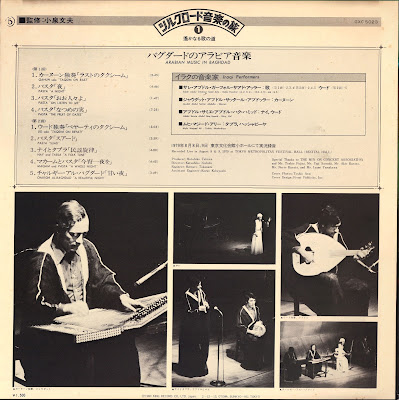 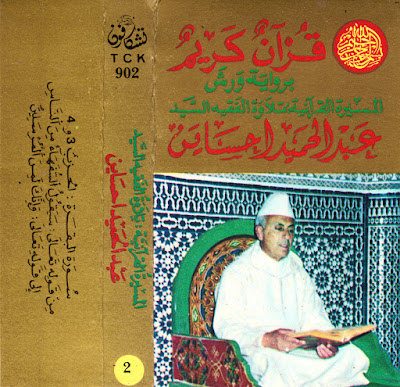 Another wellknown Qur'an reciter (Qari) from Morocco. He represents a style quite different from the very beautiful one of the outstanding Haj Abd er-Rahman ben Moussa, of whom we posted eight cassettes (see here).
This is the only cassette by Abdel Hamid Hussain we have. Warsh is the version (or reading) of the Qur'an used in Morocco.
On YouTube one can find a complete Qur'an by him:
https://www.youtube.com/user/alhouma100/videos
https://www.youtube.com/watch?v=a4vyz-aE90E 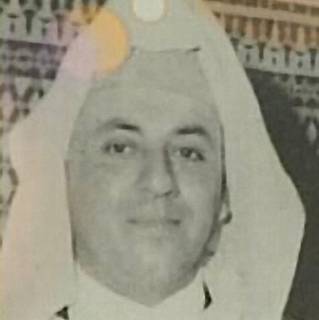 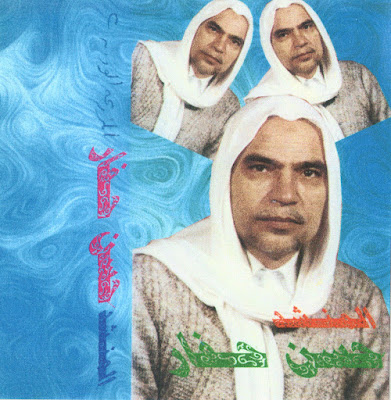 Hassan Haffar, who was part of the "Muezzins d'Alep" of our previous post, is one of the most famous Munshidin (singers of religious or Sufi songs) of recent decades in Aleppo, Syria. He toured a couple of times in the west, especially in France, where two CDs were released, and at the Fez Festival. See below one of the CDs.
Our dear friend Danny bought this cassette many years ago in Syria and was so kind to share it with us. Many thanks to him. 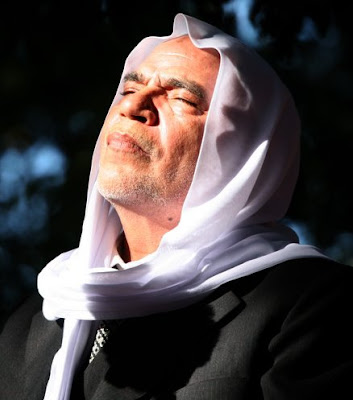 In France this fantastic set of 3 CDs was released in 2009. As always it can be obtained from: info@raga-maqam-dastgah.com 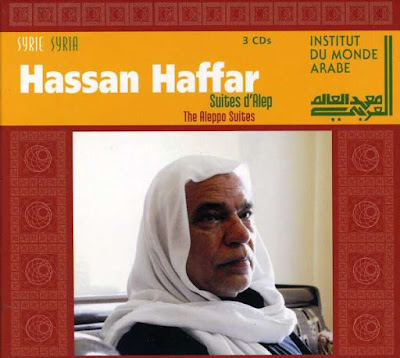 Hassan Haffar (Vocal) - Suites d'Alep - The Aleppo Suites, 3 CDs, CD 1: Suites dans les modes Yekah, Nahawand & Rast (47:27), CD 2: Suites dans les modes Hijaz, Zanjaran, 'Ajam & Sikah (47:14), CD 3: Suites dans les modes Kurd, Bayati, Bastanikar & Nakriz (48:09), INSTITUT DU MONDE ARABE, IMA 321.082-84
With an excellent booklet in French, English & Arabic including the sung poems.
„Hassan Haffar is the soloist in the eleven 'Aleppo Suites' presented here, performing with great freedom of expression. His musical and vocal skills blend introspection and sensuality and these three albums confirm him to be a master of the genre...Muezzin at the Great Mosque in Aleppo, Hassan Haffar was born in the city in 1943. A true craftsman, he was singled out for the quality, precision and strength of his voice. He was the pupil of the hymnodists Bakri Kurdi, Sabri Mudallal and 'Abd Al Ra'uf Hallaq...Accompanied by a chorus made up of his pupils he entrances the listener with the rich fullness of his lower register and the precision of his upper register. His brillant range and vocal power do not, however, exclude a rare subtlety and an exquisite refinement... “ 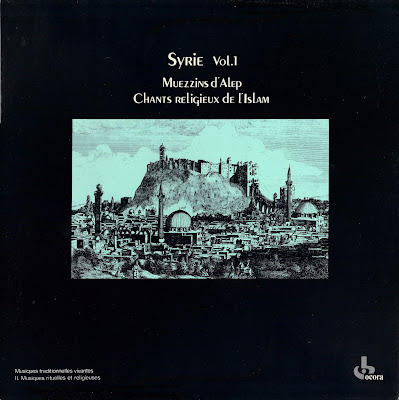 Here a wonderful LP of a group of Munshidin (religious or Sufi singers) from Aleppo, under the direction of the legendary Sabri Mudallal. Amongst them also the wellknown Hassan Haffar. We posted already three recordings by the great Sabri Mudallal (see here). We will post soon one of the many recordings by Hassan Haffar.
This LP was released later also on CD, but is no longer available since many years. A volume 2 was never published. 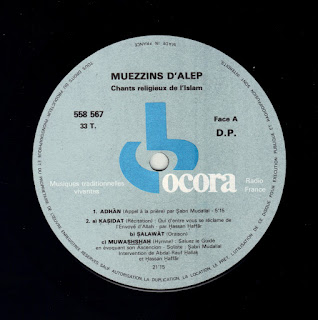 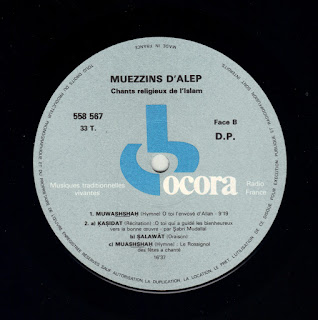 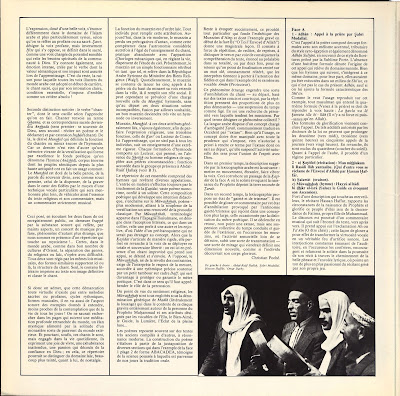 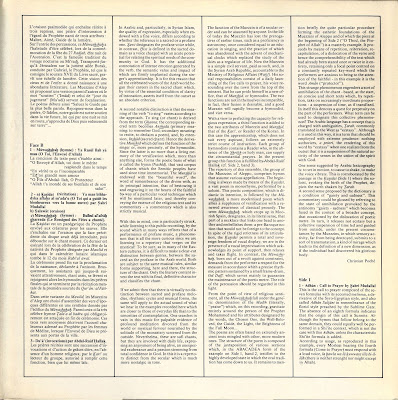 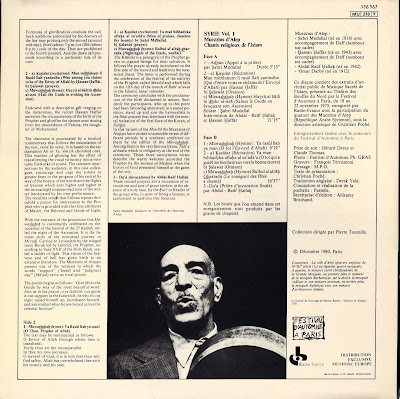 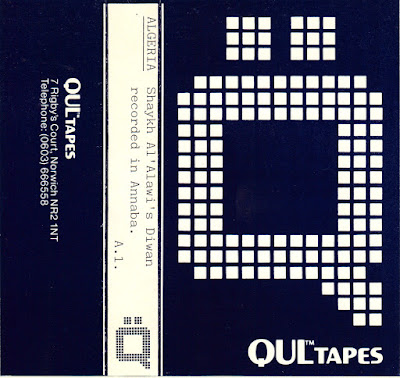 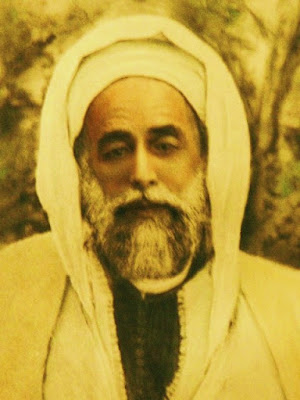 On Sheikh al-Alawi (qas) see:
https://en.wikipedia.org/wiki/Ahmad_al-Alawi
and especially this site which contains a lot of material about the Sheikh:
http://al.alawi.1934.free.fr/
His Diwan exists in English and French translations, as also many of his other works.
Posted by Tawfiq at 08:56 7 comments: 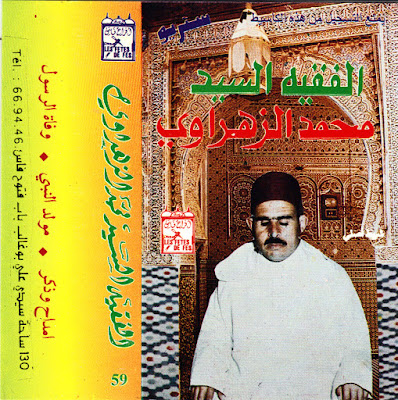 Since 27th of may it is Ramadan again. To celebrate it, especially the blessed nights, we post here some cassettes and LPs of Sufi ceremonies, Munshidin from Syria and Qur'an recitation.
First a cassette from Morocco, which I bought in an Islamic bookshop in Brussels in the late 1980s or early 1990s. It contains: Amdah (songs of praising Allah) & Dhikr (remembrance of Allah), Mouloud an-Nabi (celebration of the birthday of the Prophet (saws)) and Wafa ar-Rasoul (?) (I don't know what this means exactly). This is a typical repertoire as it is sung in the first part of a Majlis, a Sufi gathering. 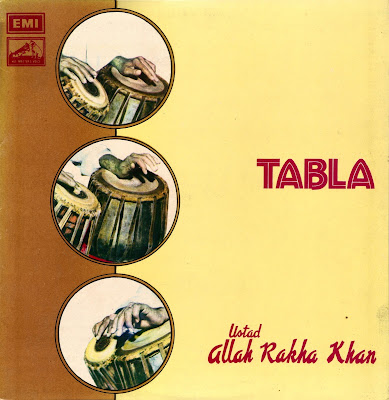 Here a rare LP from Pakistan by the great Ustad Alla Rakha.
Sarangi Lehra is by Ustad Nathu Khan. 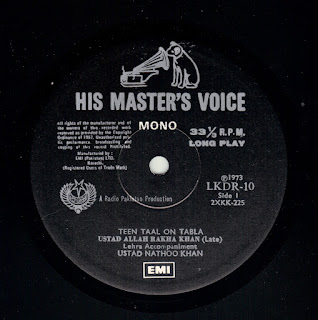 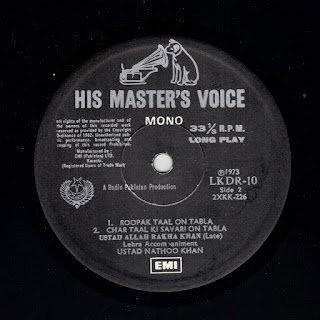 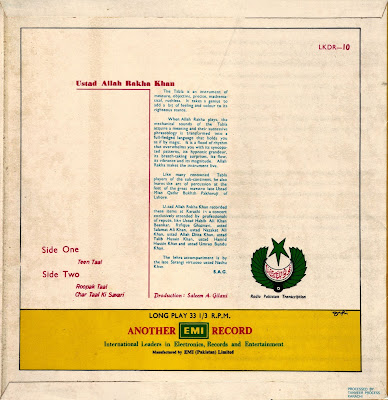