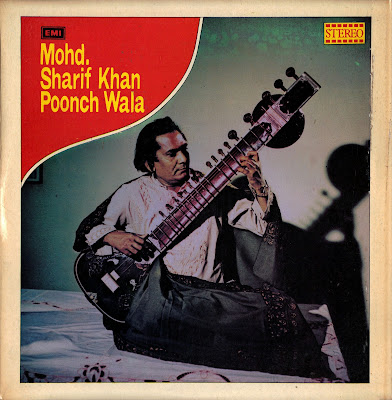 The legendary Sitar player Mohammad Sharif Khan Poonchhwala (1923-1980) was also a great Vichitra Veena player and a Raza Been (Rudra Veena) player. Here a wonderful LP by the Ustad playing these two instruments. Sitar he learned from his father Ustad Rahim Bakhsh Khan, who himself was a student of Ustad Imdad Khan. The Vichitra Veena he learned from Ustad Abdul Aziz Khan Beenkar. 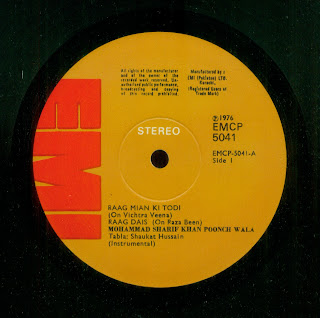 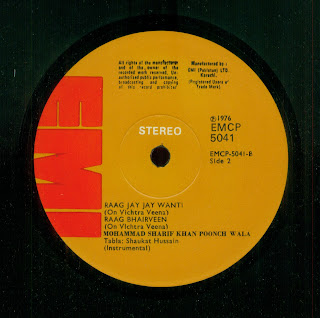 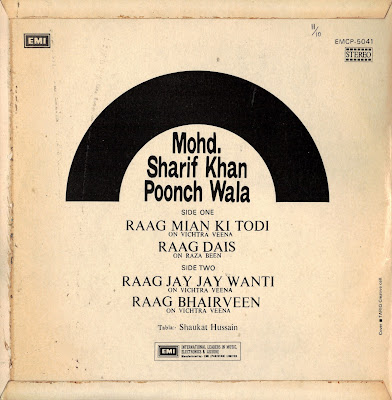 Musical lineage
Ustad Sharif Khan died on May 26 in 1980 and his 32nd barsi went unnoticed among the music circles of the country
By Sarwat Ali
Traditionally barsis are held to honour the memory of the ustad and provide an opportunity for other musicians to express their homage. And what better way can there be of paying a tribute than in the language of music. Barsis over the centuries have become the biggest platform for performance and recognition of the significance of music lineage.
These barsis ideally should be organised by the shagirds and the connoisseurs of music and then made into a regular affair through some systematic arrangement but it has been seen that the onus of celebrating/observing these barsis falls on the progeny of the ustad. If the progeny is enterprising and has done well in life the level of the barsi programme is reasonably high and the occasion holds some promise. But if it has not fared well then the barsi is either never held or if held fizzles out to such a sorry end that one wished that it had never been held in the first place.
Not only in the case of musicians but the other celebrated individuals, writers, poets or public figures, the barsis are usually held by the progeny or extended family of the individual. The progeny is in a certain fix in this arrangement, for if the family is involved it exposes itself to all kinds of accusations and possible slander like capitalising on the fame of an ancestor for enhancing its own status and glorifying the lineage. But if they do not venture forward then no one else does and the society is deprived of the positive fallout of the event.
The immediate family of Sharif Khan lives in Lahore but the only child who made a name for himself in sitar playing Ashraf Sharif Khan moved to Germany where he has lived now for more than 15 years. He occasionally visits Pakistan to meet his family and to possibly play at a couple of concerts in the various cities of the country. When he lived in Pakistan he was able to motivate a few connoisseurs of music and admirers of Ustad Sharif Khan to organise some event to remember and honour his father’s contribution to the sitar and vichitra veena but since he moved out of the country the annual event is now more conspicuous by it not being held.
Ustad Sharif Khan was born in Hissar which is now in Haryana, probably in the third decade of the 20th century and after dabbling with the tabla and harmonium became a musician at the court of the Maharaja of Poonch. He followed the path treaded by his father Ustad Rahim Bakhsh Khan who too was associated with the state of Poonch, and according to some was the ustad of the maharaja himself.
A virtuoso himself, Ustad Rahim Khan was from a family of vocalists but had switched to the string instruments and became an outstanding instrumentalist under the tutelage of Ustad Imdad Khan, the grandfather of Ustad Vilayat Khan. Ustad Sharif Khan himself became the shagird of Ustad Inayat Khan, the son of Imdad Khan and hence the father of Ustad Vilayat Khan.
For Ustad Sharif Khan, the going was much tougher in Pakistan. He had established himself as a sitar player before partition but the lukewarm response and lack of appreciation of classical music made him look for other avenues to meet both ends. The film was the only platform that could pay him enough to survive and thus continue with his passion of exploring the musical range of both the sitar and veena. He was initially associated with Pandit Amarnath and after partition he found creative affinity with Khurshid Anwar and for whom he played the sitar and veena in his numerous compositions.
Ustad Sharif Khan spent long hours mastering the very difficult art of playing the veena. Nobody in his family was a veena player but when he was taunted by the nephew of Ustad Abdul Aziz Beenkar that it was almost impossible to play the vichitra veena he took it up as a challenge. The balance of both the hands and the technique to be applied had immense differences in the art of playing the two instruments but he switched from the one to the other with seeming ease. The graces in particular the meends so characteristics of the veena found their way when he took to playing the sitar seriously. These meends on the sitar expanded the musical possibilities inherent in the instruments. It can be said without fear of contradiction that no other sitar player has been able to achieve it.
Though he was given the Pride of Performance and Sitara-e-Imtiaz it was difficult for him to keep two ends meet. He really had to struggle hard and it was at the cost of his health. In most of the recordings he could not hold back his coughing and it also got recorded with his priceless music. Struggling to keep economically solvent in a society with only a qualified acceptance of music cost him dearly and he died in 1980 at the prime of his creative life.
from: http://jang.com.pk/thenews/jun2012-weekly/nos-03-06-2012/enc.htm
Posted by Tawfiq at 19:26 7 comments: 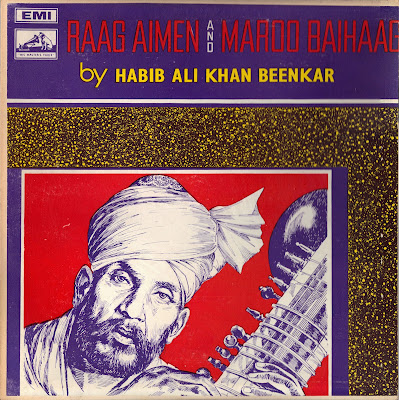 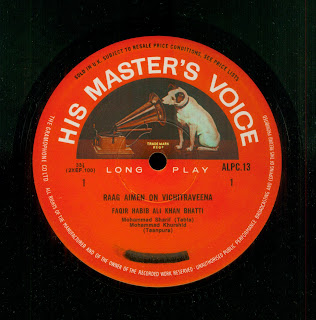 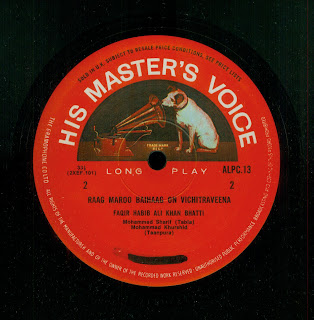 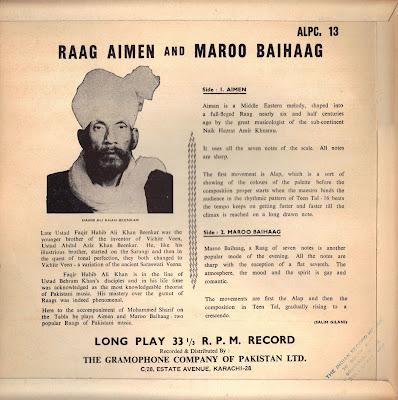 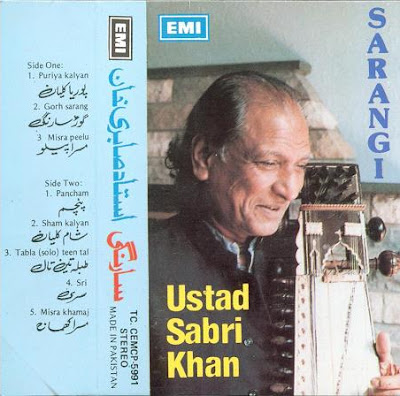 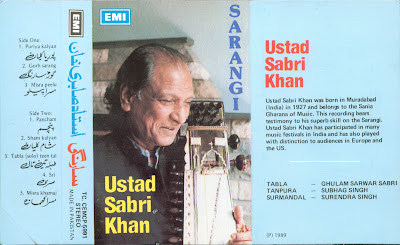 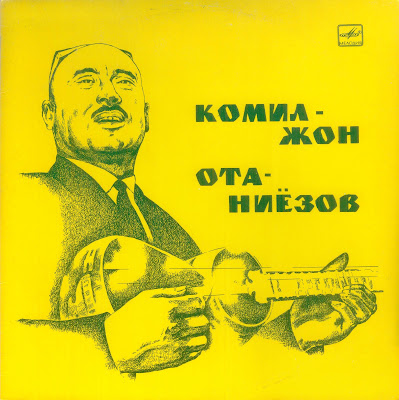 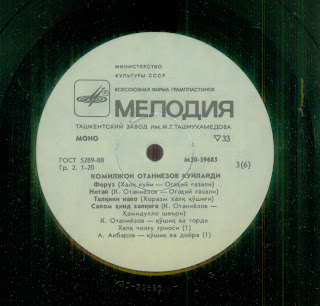 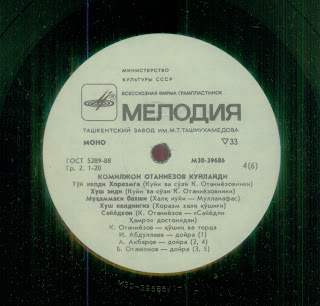 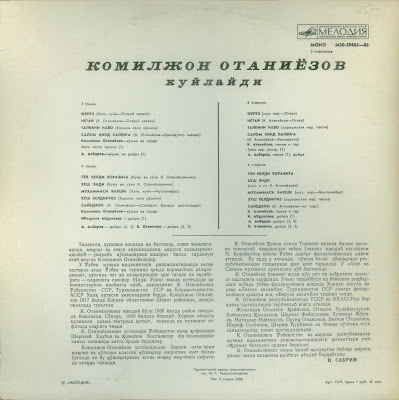 Apparently there is also a volume 3. Unfortunately we don't have that one.
Posted by Tawfiq at 07:23 2 comments: