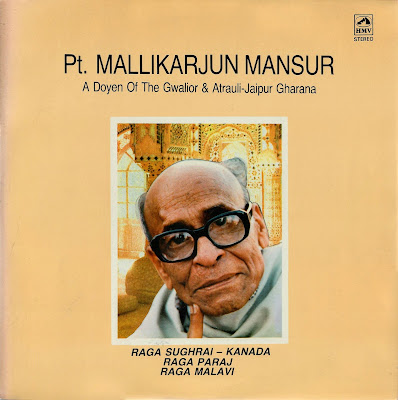 Though the artist orginally learned from a master of the Gwalior Gharana and there exist quite a number of 78 rpm records on which he sings in this style, his later music is pure Jaipur Gharana. In effect the finest example of Jaipur Gharana after the founder Alladiya Khan and his two sons. 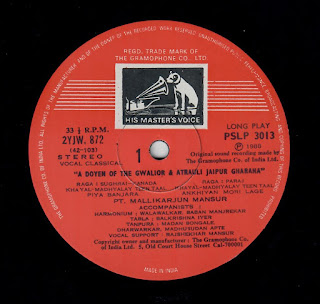 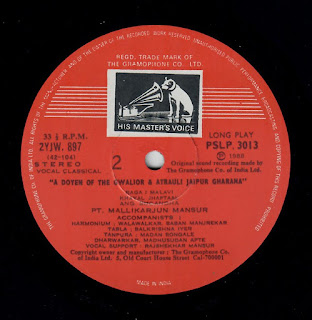 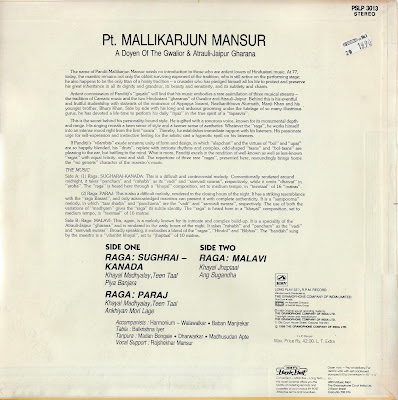 Mallikarjun Mansur is no more. The torrent has gone back into the magic mountain from where it used to flow.
He sang for more than sixty years. And he sang till almost the very last, although he had been so continuously harassed by illness. I recall a private concert he gave in Delhi just five or six months ago when he was kind enough to tell the hosts to ask me to be present. On that occasion he apologised to the audience for not being able to sing for even two hours.
There was always a special intensity to his singing, a special urgency and earnestness in his treatment of melody. These are days when the voice can be preserved, unlike earlier centuries, or the beginning of the phonograph with three-and-seven minute records. Some may say that the immortals of music can now be truly immortalised. But a record of a Mansur concert can never be a substitute for the live one — for each time he sang with a new creative impulse, and in each rendering there were several surprises. His Patdeep or Shivmat Bhairav of today would be a different experience from his Patdeep and Shivmat Bhairav of yesterday.
So many of our well-known authors and artists move about with a swagger for they seem to believe that they are indeed colossi striding the scene. They are all the time looking at those who are looking at them. Mallikarjun did not possess a regal bearing. He did not clothe himself in princely robes. He did not care to be the centre of attraction. He was content to be inconspicuous. He continued to look like a shopkeeper’s accountant. He did not speak like an oracle. He rarely referred to his triumphs. He won not only the respect but the affection of his contemporaries. He was wholly without envy. His was an unfailing geniality and lightness of heart. His airs were what he sang. He did not put on any.
Those who met him never failed to wonder at his combination of eminence and humility. His autobiography would throw some light on this riddle of Mallikarjun. “Nanna Rasayatre” (which could be rendered rather inadequately as “My Emotional Pilgrimage” — for there is no satisfactory English equivalent for “rasa”) is a little masterpiece. But few know about it because it is in his mother tongue, Kannada.
Most autobiographies in our country are by political persons or by literary men. Few are by artists. Mansur’s book cannot be compared with Yehudi Menuhin’s in its length or its depiction of a musician’s challenges and rewards. Mansur tells us that his fingers are meant to play the tanpura and not ply a pen. He took up the book only under the pressure of a couple of literary friends — A. N. Krishna Rao of Karnataka and P. L. Deshpande of Maharashtra. He had kept no diary. His intention in writing the book ultimately was not to impress but to record his debt to his musical and spiritual preceptors.
Mallikarjun’s reverence for his teachers comes out strongly especially for Nilkantha Buwa and for the sons of Alladiya Khan — Manji Khan and Burji Khan. For him they were perennial rivers from whom he could not draw enough. Even when he was nearing forty he kept going from his hometown Dharwad to Kolhapur for lessons from Burji Khan.
Writing nearly thirty-five years after Burji Khan’s death, he would say that his gurus continued to guide him in spirit, inspiring him, enabling him to understand the meaning of music, and bringing him whatever reputation he had gained.
Outwardly the most captivating aspect of Mallikarjun’s music was its dramatic element. He went on the stage even as a young boy, following in the footsteps of his elder brother, and made a name for himself as Prahlada, Dhruv and Narada. But he also left the stage early, when he was still in his teens. The musician Nilkantha Buwa heard him and told his brother: “Give this lad to me. I shall make him a musician. His genius should not be wasted in theatre companies.” The Buwa himself was with a religious establishment and apprenticeship to him was more than a musical training.
Although he had made several discs for HMV even in his early twenties, music did not become a paying profession to Mallikarjun until much later in life. His mother’s faith sustained him initially. After his marriage, his wife somehow managed the house, convinced that she should aid his tapas.
One of the most moving chapters in the autobiography concerns Mallikarjun’s mother. The family decided to go on a pilgrimage to the famous Saivite temple at Srisailam. Once there, Mallikarjun went to have a dip in the sacred pool, leaving his coat at the top of the steps. When he came up, the coat had disappeared and with it all the money of the party as well as the return tickets. He spent the whole day and evening moping. But his mother put heart into him. When it was nearly midnight, she took him to the temple and asked him to sing. The main door had been closed, but Mallikarjun obeyed his mother’s command. He began to sing and soon the singer was lost in his song. To his surprise a priest opened the door and asked the group to go in.
Mallikarjun’s mother stood before the idol and made a prayer: “Lord, if you are true, take me unto yourself. I have no further interest in living. This is my only plea to you.”
Mallikarjun joked and told her: “How can He take you unless we let you go?”
Posted by Tawfiq at 11:29 3 comments: 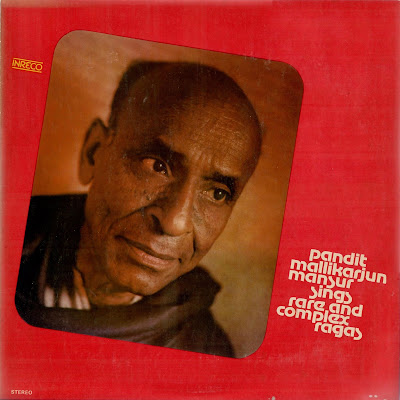 Now we post two LPs by the great Mallikarjun Mansur which our blogger friend Bolingo already posted years ago. But at that time to offer also flac files was not the norm. We present here also flac files.
Here the first of these two LPs. It was the very first LP by this artist I ever encountered and bought. I discovered it in the late 1970s in one of the 3 or 4 Indian and Pakistani record shops in Southall near London. I remember still very vividly that when I saw this record I immediately knew that I was in front of something exceptional. What first struck me was that ascetic looking intense face. I don't remember if I listened already in the shop to the LP. But what I remember is that when I listened to it at home the music took me immediately: I never had heard such beautiful music before and such a radiant voice and such rich taans. It was like eternally flowing music from another world. For many years it stayed my favorite record and still is. By now I have over two hundred recordings by the great master, but this one is still extremely dear to me.
Over the years we posted already seven LPs and cassettes by the artist. See here. 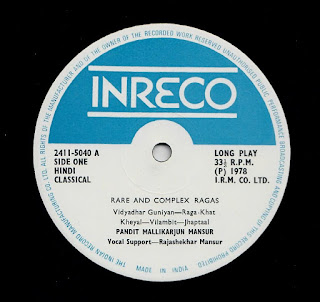 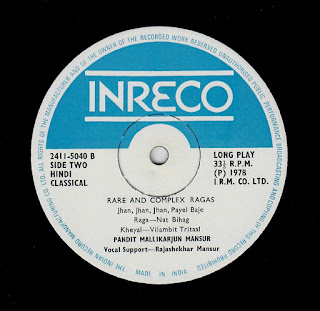 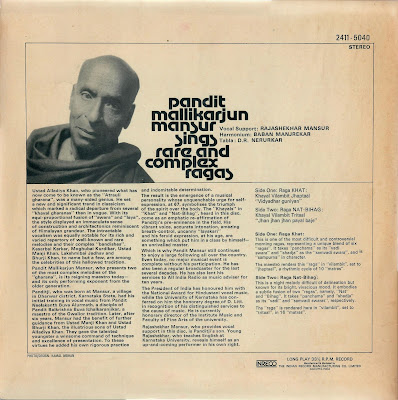 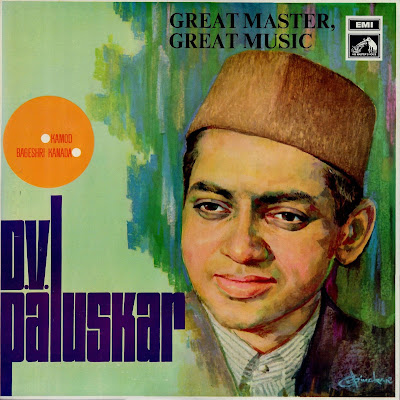 Here another beautiful LP by the great artist. This one was amongst the very first vocal recordings I obtained and was for a long time one of my favorites and still is. I bought it mid 1970s in London or Southall on my first or second shopping trip to the Indian record shops there. 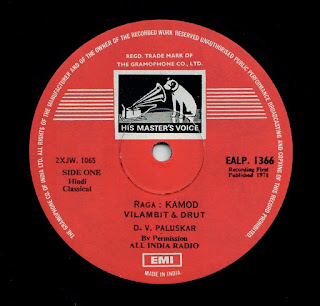 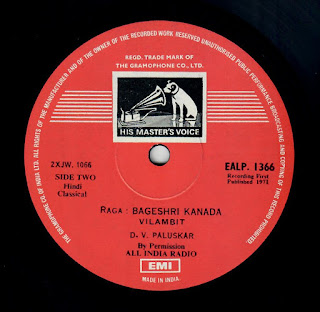 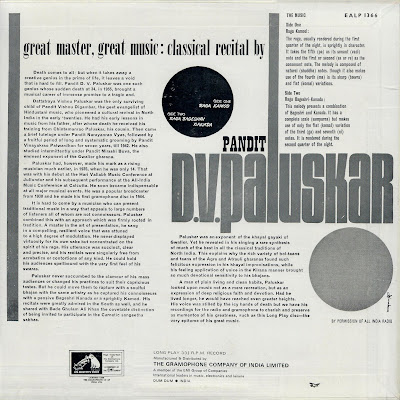 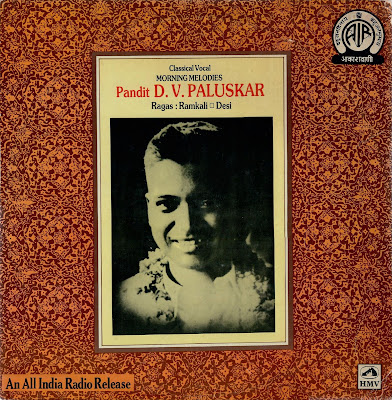 D.V. Paluskar (1921-1955) was one of the greatest and most popular singers of the Gwalior Gharana in mid 20th century. He passed away quite young.
On the artist see:
https://en.wikipedia.org/wiki/D._V._Paluskar
https://sites.google.com/site/dvpaluskar/
http://www.chembur.com/anecdotes/dvpaluskar.htm
http://swaratala.blogspot.de/2011/04/pandit-dv-paluskar-and-paluskarite.html 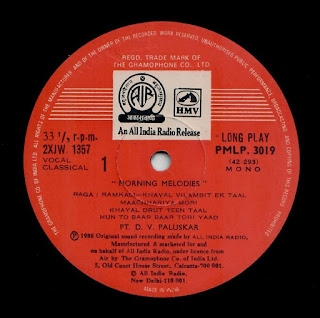 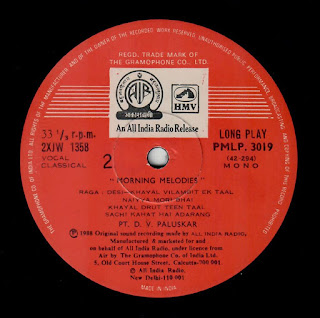 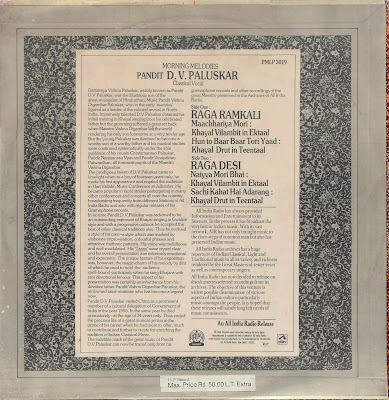 There are quite a number of CDs by the artist: two by Akashvani from the archives of All India Radio, a series of five CDs by Meera Music and a couple of others. As always, they can be obtained from info@raga-maqam-dastgah.com 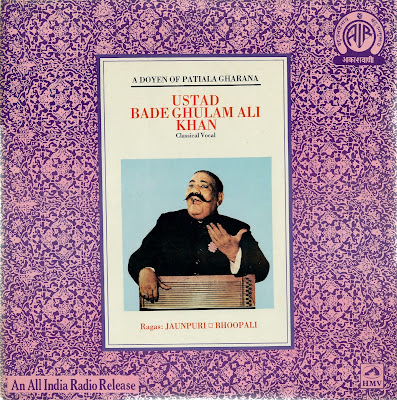 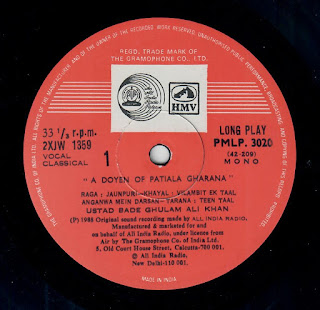 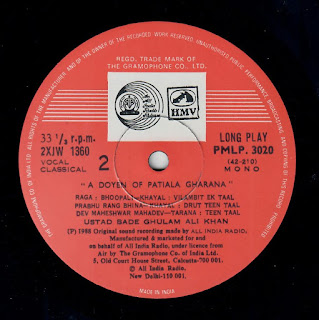 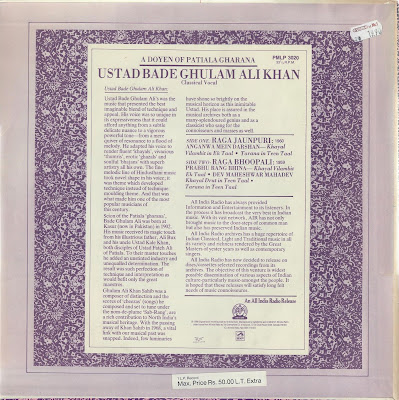