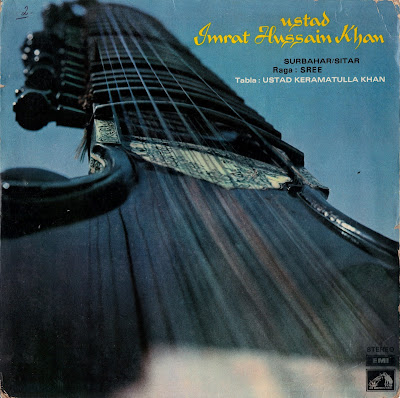 Beautiful LP by Imrat Khan, accompanied by the great Keramatullah Khan on Tabla. 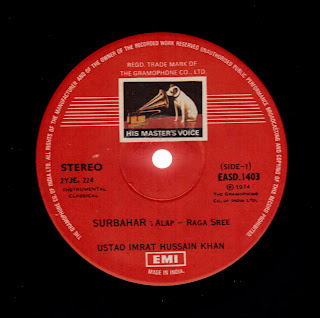 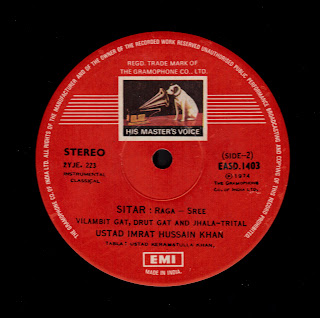 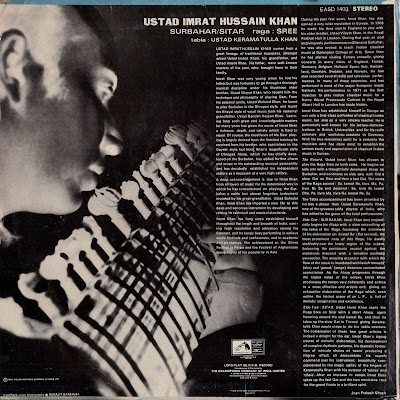 Ustad Zia Fariduddin Dagar passes away on May 8, 2013 - In his memory two recordings from AIR 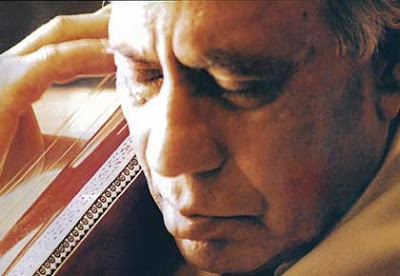 Ustad Zia Fariduddin Dagar was born in Udaipur, Rajasthan on the 15 June 1932. His father was Ustad Ziauddin Khan Dagar, court musician of the state of Udaipur. He was taught Dhrupad by his father and elder brother, the Veena maestro, Ustad Zia Mohiuddin Dagar.
Ustad represented the 19th generation of the Dagarbani musical tradition and has dedicated his life to the propagation of this art form. He was known for his remarkable command over microtones (swar-bheda), gamak and other alankarans and lakshans.
He has been the recipient of many awards a few of which include the Tansen Samman from the Madhya Pradesh government (1993), the Sangeet Natak Akademi Award (year) as well as the Padma Shri (2012). In 2005, he was awarded the Lifetime Achievement Award by the North American Dhrupad Association. He was the first director of the Dhrupad Kendra, Bhopal and taught there since 1981 for many years.
A large number of well known Dhrupad performers came from this institute under his guidance and tutelage, including the Gundecha Brothers, Uday Bhawalkar, Ritwik Sanyal and Nirmalya Dey. He also taught at Dhrupad Sansar at IIT Mumbai for 5 years. He lived and continued to teach near Panvel at a Gurukul built by his elder brother. He performed widely in India and abroad.
with some modifications from: http://dhrupaduday.com/gurus/


More about the artist:
http://en.wikipedia.org/wiki/Zia_Fariduddin_Dagar

We were very fortunate to have seen him perform still this year in February at the Dhrupad Festival in Rasa, Utrecht, Holland.
See: http://www.dhrupadfestival.nl/ 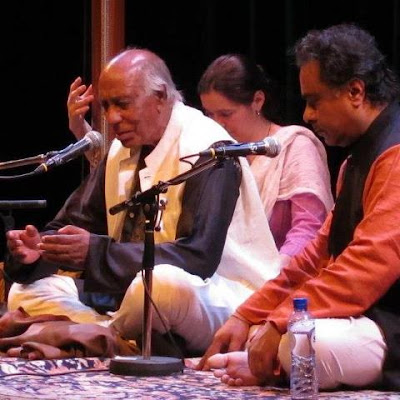 Ustad Zia Fariduddin Dagar and Nirmalya Dey on stage at the Dhrupadfestival.

Here a video of his performnace at the Dhrupad Festival in Utrecht, Holland, in February 2013

And here in his memory two recordings broadcast by All India Radio:

Available recordings
(they can be obtained from: info@raga-maqam-dastgah.com): 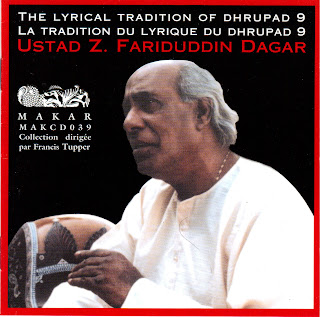 Z. Fariduddin Dagar (Vocal), Nirmalya Dey & Yvan Trunzler (Vocal Support) & Shrikant Mishra (Pakhawaj) - The lyrical tradition of dhrupad 9 - Dagarvani: Raga Chalnat: Alap (29:14), Jor (12:27), Jhala (7:12) & Tevra (17:52), MAKAR, MAKCD 039, EUR 8,00
Ustad Fariduddin Dagar is the senior singer of the Ziauddin Dagar style of Dhrupad. As a master performer, he has won over miriads of listeners, as a master teacher, he has trained almost all of the new generation's elite of Dhrupad singers and instrumentalists. Ustad Zia Fariduddin Dagar, born in 1933 in Udaipur (Rajasthan) has been trained by his father Ustad Ziauddin Khan, court musician of the Maharajah of Udaipur. From him he learnt vocal Dhrupad of the Dagarvani style but also sitar, bin and surshringar, and after his demise he learnt with his elder brother, late Ustad Zia Mohiuddin Dagar. As one of the greatest performers of Dhrupad, he has performed in numerous concerts in India and around the world. He is the recipient of the famous Tansen Award, Sangeet Natak Akademi Award, and many more. Ustad Fariduddin Dagar is one of the most prolific teachers of Hindustani classical music: he has trained more than a dozen of Indian and Western dhrupad singers of the new generation like Uday Bhawalkar (MAKCD 008, MAKCD 031), the Gundecha Brothers, Yvan Trunzler, Nirmalya Dey or Monica Lacombe. He is teaching in India: Mumbai (Dhrupad Gurukul, founded by his brother), Bhopal (his own school), Baroda (Madhya Pradesh government's Dhrupad Institute), Bangalore; but also in the West: Conservatory of Rotterdam, and leads numerous workshops around Europe and America. 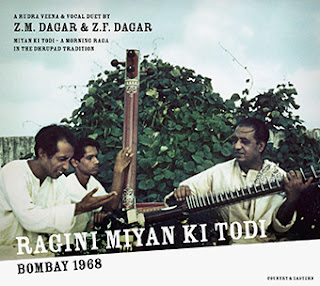 Zia Mohiuddin Dagar (Rudra Veena) & Zia Fariduddin Dagar (Vocal), K. Shridhar (Tanpura) – Ragini Miyan Ki Todi – Bombay 1968 - A Rudra Veena & Vocal Duet by Z.M. Dagar & Z.F. Dagar – Miyan Ki Todi – A Morning Raga in the Dhrupad Tradition: Ragini Miyan Ki Todi – Alap, Jod, Jhala (54:11), COUNTRY & EASTERN, CE 19
“The first release with the rudra veena-vocal duet in raga Malkauns was recorded in Ustad Zia Mohiudding Dagar's house in Chembur on the evening of february 4, 1968. On the very next morning he and his younger brother Ustad Zia Fariduddin Dagar recorded the raga that is the female counterpart of raga Malkauns, Ragini Miyan Ki Todi. The name means Miyan's Todi and it is said to have been created by the famous Miyan Tansen, one of the 9 jewels of emperor Akbar's court in the 16th century, as his version of the Todi raga.” 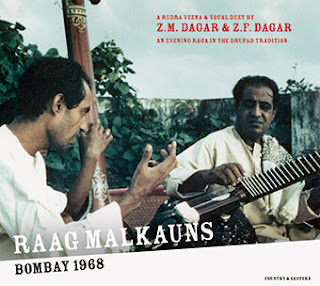 Talib Hussain (Tabla & Pakhawaj) and other Tablaiyas - Cassette from Pakistan 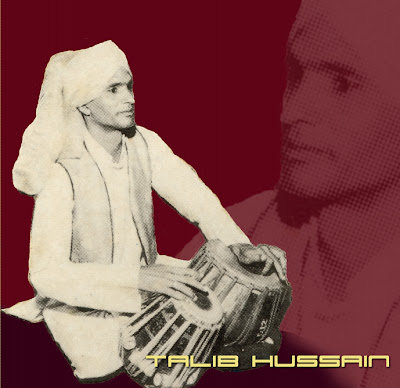 Ustad Talib Hussain was one of the major two or three Tabla players in Pakistan from the 1960s to the 1990s and one of the last remaining Pakhawaj players of Pakistan. He was well versed in both Tabla and Pakhawaj playing. He learned from his uncle Baba Malang Khan of Talwandi. Later on he further studied with Ustad Gami Khan of Dehli Gharana. In addition, he was the last recognized practitioner of the Punjab style of Pakhawaj playing (from which the tabla gharana has its roots). Unfortunately, at a relatively young age, Ustad Sahib was murdered in a mosque by militants in Lahore in 1993.
We present here a cassette published in Peshawar, Pakistan. We don't remember from whom we obtained this cassette and unfortunately we didn't scan the original cover. These recordings are different from the ones published in 1974 on LP by EMI Pakistan and now available for download on many download platforms like Amazon, Musicload, emusic etc.

The correct track info according to the cover below - posted by Bosmart - is, if we read it correctly: 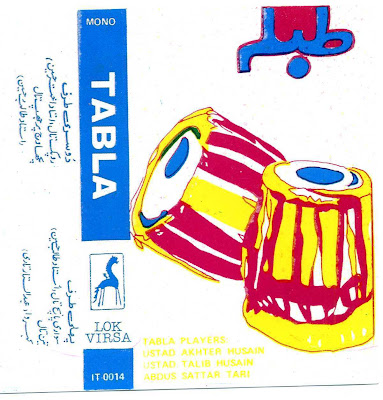 The version which we copied many many years ago was from a cassette published by Ariana Recording in Peshawar. Unfortunately we didn't copy the cover and in the deciphering of the names of musicians we made either mistakes or the information given on this cassette was not correct. Anyway, the Ariana cassette seems to be a later copy of the original Lok Virsa cassette. We are very grateful to Bosmart to have posted the original version.

There were two Tabla masters by the name of Akhtar Hussain, one of them being the last Khalifa of the Punjab Gharana. I guess here we have this Akhtar Hussain.

On the Punjab Gharana see:
http://en.wikipedia.org/wiki/Punjab_gharana
Posted by Tawfiq at 10:47 11 comments: 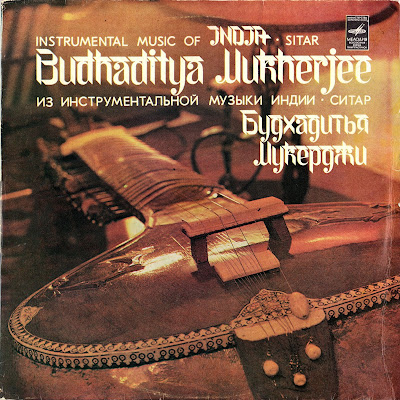 A beautiful LP by Budhaditya Mukherjee recorded 1979 in the Soviet Union
and published there as an LP in 1982. 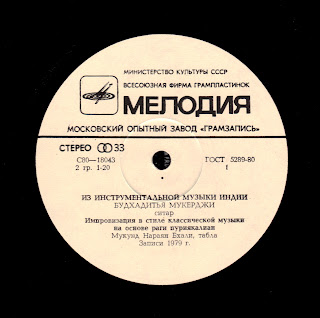 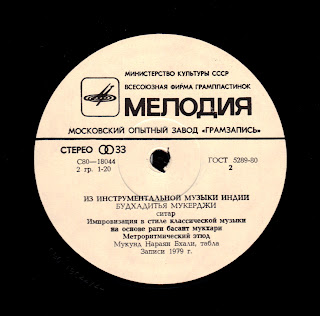 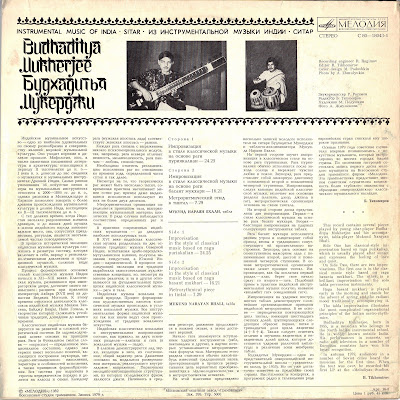