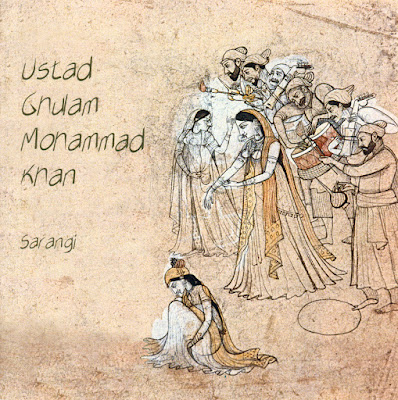 Here our fifth post of great Paksitani Sarangi masters. Unfortunately I don't know anything about this artist, except that he was wellknown as the regular accompanist of Nazakat & Salamat Ali Khan. He is present on several of their CDs and LPs. See for example here.
A friend lent me this LP many many years ago to digitize it. At that time I didn't know yet how to do it, but I had a friend with a lot of experience in digitizing LPs. Unfortunately he didn't scan the covers and created instead new covers, the ones you see here. Many thanks to this friend (KF).
Here the infos with which Dr. Kashyap Dave, the wellknown Sarangi expert, player and teacher, who has helped us out already a couple of times with valuable pieces of information, came up:
"Here are the available details for Ustad Ghulam Mohammed Khan with original credit to my friend Mr. Ali Zafar.
U. Ghulam Mohammad Khan was born in Hoshiarpur in 1910 in a family lineage of eminent sarangi and tabla players. He started learning sarangi at a very young age from his father Bahadur Ali alias Babu Khan. After his father’s death he continued learning this difficult art from his maternal uncle Ghulam Hussain Khan. Later he became a formal disciple of the illustrious Mamman Khan of Delhi Gharana and also of Raheem Buksh Shamapuri. From a very early age he was a very skillful and melodious sarangi player, and attended many music conferences and he accompanied Ustad Bade Ghulam Ali Khan quite frequently in Hyderabad in the early sixties. U. Ghulam Mohammad migrated to Pakistan to settle in Chak Jhumra, a small town in Punjab. Soon he became an artist of Central Production Unit in Radio Pakistan Lahore. In Pakistan he accompanied almost all the great classical vocalists like U. Nazakat Ali & U. Salamat Ali, U. Amanat Ali & U. Fateh Ali He was also an accomplished solo sarangi player. He died in 1974 in the premises of Radio Pakistan Lahore. U. Ghulam Mohammad Khan's sons Ghulam Shabbir Khan and Ghulam Jaffer Khan are respected vocalists in Faisalabad.  His grandson, Akhtar Hussain is carrying his tradition of sarangi playing in Karachi.
Hope this helps." Sure it does. Thank you so much.
See Dr. Kashyaps websites:
https://www.facebook.com/sarangi.lessons.online/
https://www.facebook.com/pg/sarangi.lessons.online/photos/?tab=album&album_id=1246603635397313 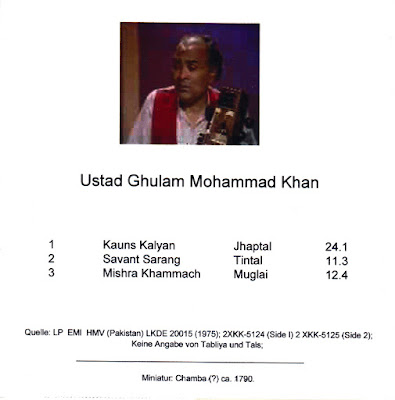 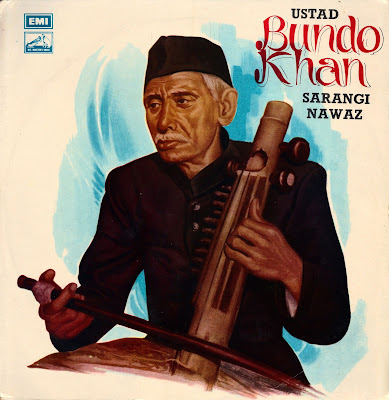 Bundo (Bundu) Khan was one of or perhaps the greatest Sarangi player of 20th century. He had a very particular style and played also on a very particular Sarangi.
We posted in 2012 a broadcast on him:
http://oriental-traditional-music.blogspot.de/2012/04/sarangi-legend-ustad-bundu-khan-1880.html
The same year we also posted some more recordings:
http://oriental-traditional-music.blogspot.de/2012/04/ustad-bundu-khan-1880-1955-more.html
Interesting information on the artist you can find under the first of these links. 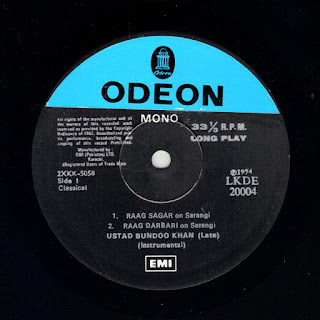 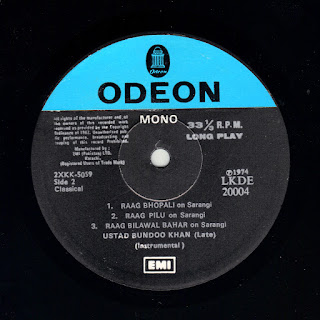 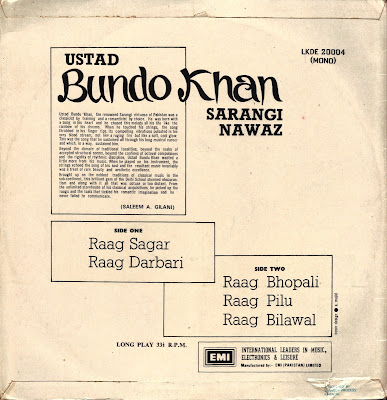 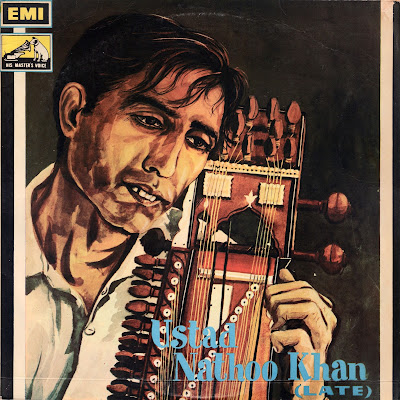 Nathoo (Nathu) Khan was one of the greatest Sarangi players of the 20th century. Here his only LP, published posthumously. He was for me the first Raga musician I ever heard consciously, on the LP "Pakistani Soul Session" (in 1968), and whose music fascinated me so much that the love for Raga music in general, for Sarangi and this artist in particular never left me afterwards. Everything started with him.
See here our post from 2011 of the LP Pakistani Soul Session, containing an article on the artist.
See also:
http://qaul.blogspot.de/2008/06/ustad-nathoo-khan-sarangi-maestro.html
https://sarangi.info/sarangi/nathu/
https://www.facebook.com/ustadnathukhan/ 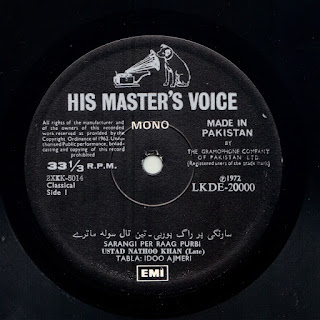 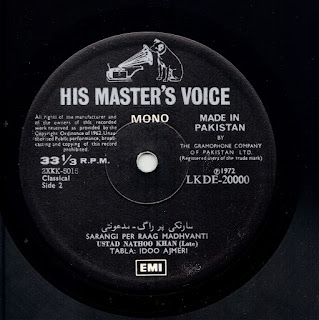 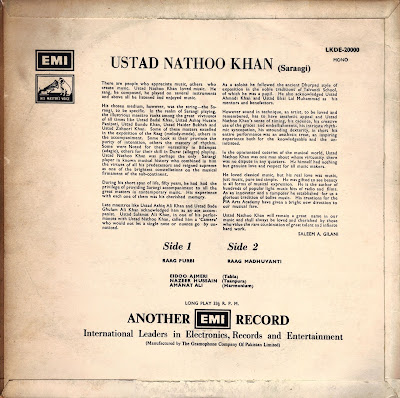 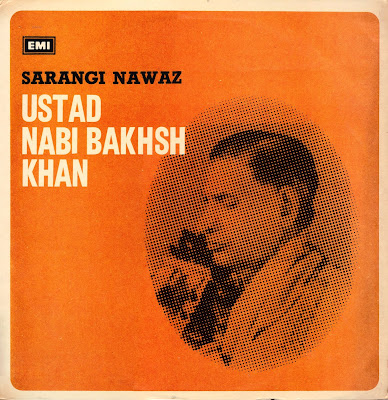 Here we continue with our series of Pakistani Sarangi players. Ustad Nabi Bakhsh Khan was one of the most refined Sarangi players of his time.
Here what DrKashyap said:
"Here is info about Ustad Nabi Baksh Khan (credit to my friend Ali Zafar from Lahore):
Born in 1910 in Jhajjar, Ustad Nabi Buksh belonged to the illustrious Panipat Gharana of sarangi players. His father Chaman Ali Khan died when Nabi Buksh was still very young. He learned the art of sarangi playing from his maternal uncle Hussain Buksh (Giyani Khan) and later from the illustrious Badal Khan of Panipat. He became a staff artist of All India Radio Delhi at a very young age. After Partition he joined Radio Pakistan Lahore as a staff artist and served there till his retirement in 1980. Ustad Nabi Buksh was an exceptional accompanist and played with the great singers of his time like Bade Ghulam Ali Khan, Barkat Ali Khan, Amir Khan, Salamat Ali/Nazakat ali, Roshan ara Begam, Umeed Ali Khan etc. He also played solo and also has some LP records to his credit. He was awarded the Pride of Performance Award in 1986. Ustad Nabi Buksh Khan died in 1989 in Lahore. His sons Irfan Nabi Bukhsh and Israr Nabi Buksh are carrying forward his musical tradition of sarangi playing."
There exist a number of other recordings on YouTube etc. He accompanied a number of the Pakistani singers we have posted here on our blog, like the four cassettes by Roshan Ara Begum. 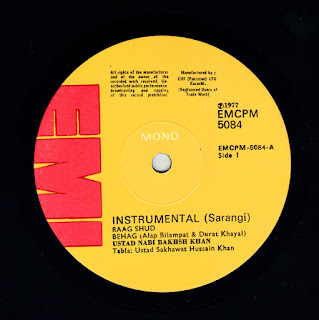 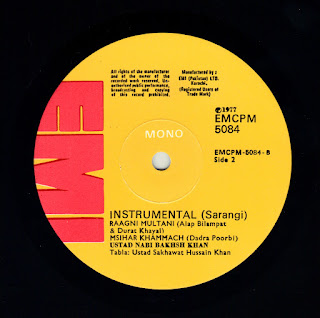 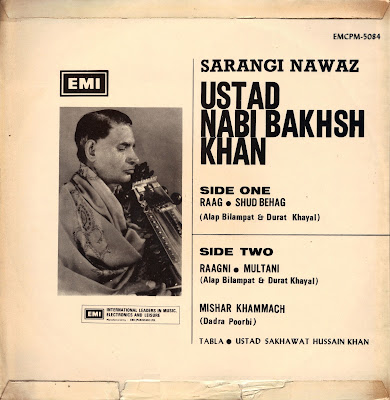 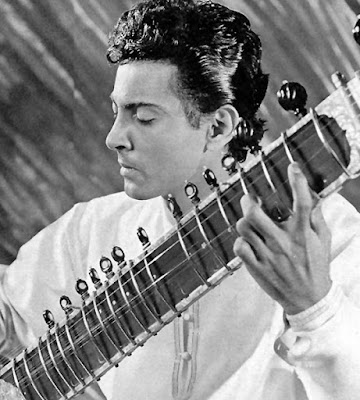 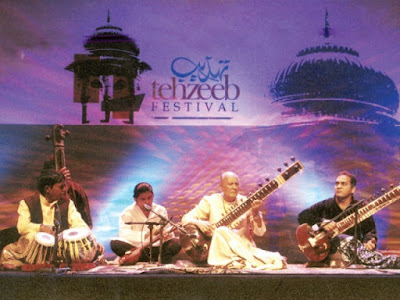 We posted in September 2014 a cassette by the great Ustad, who had a very personal and beautiful style and a wonderful touch:

Our blogger friend on Flat, Black and Classical: Indian Classical Music on Vinyl and Cassette posted in July 2016 an LP published in 1980 in Germany:
http://flatblackandclassical.blogspot.de/2016/07/ustad-rais-khan-new-sitar-loft-1008-1980.html 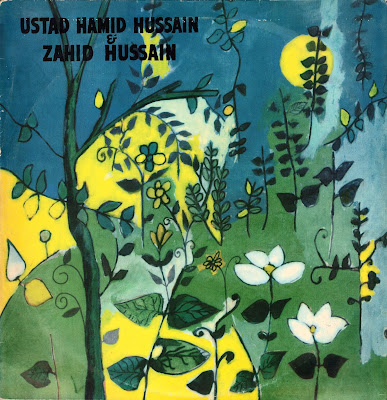 We start now to post a series of five LPs by great masters of the Sarangi from Pakistan. After that we will post two more recordings from Pakistan, which was a true treasure house of classical Raga music up to the early 1980s.
We start with an LP by Hamid Hussain, one of the greatest Sarangi players of the past century. Here he plays Jugalbandis (duets), on side 1 with his younger brother, also a Sarangi player, on side 2 with Sharif Hussain, the leading Sarod player in Pakistan at that time. It seems that Sarod always was a quite rare instrument in Pakistan.
We had already in July 2011 posted an LP by the artist. See here.
The book "Master Musicians of India - Hereditary Sarangi Players Speak" by Regula Burckhardt Qureshi contains a wonderful chapter on and by Hamid Hussain (pages 269 to 289), the most fascinating part of the whole book. 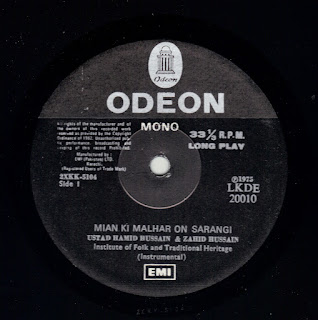 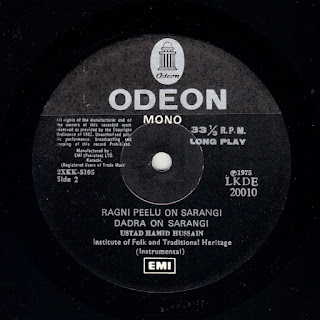 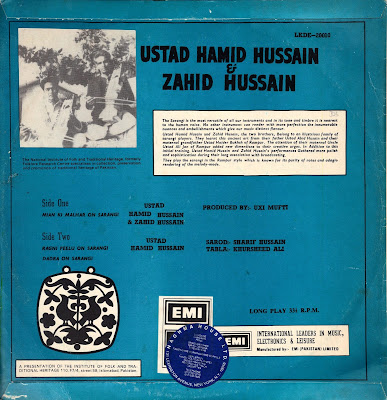 
“Ustad Hamid Husain belonged to the illustrious Muradabad Gharana of sarangi players. He was born in Rampur in 1923. Soon after his birth, his grandfather Haider Husain Khan along with father Abid Husain joined the court of Rampur. The young Hamid received his initial training in sarangi from his father and grandfather. He also got training in sarangi from his maternal unclce Ustad Ali Jan of Rampur.
Hamid Husain joined the All India Radio, Delhi when he was only 15 years old. After the death of his grandfather, he shifted to Bombay in 1939. It was during his tenure there that Noor Jehan as a teenager was auditioned and sang for the first time on Radio accompanied by Hamid Husain. In 1943 he went on an extensive tour of Europe where he gave solo sarangi performances.
Ustad Hamid Husain accompanied most of the senior vocalists of his time including Ustad Fayyaz Khan, Ustad Amir Khan, Begum Akhtar (Akhtar Bai Faizabadi), Roshan Ara Begum, Ustad Nazakat Ali-Ustad Salamat Ali Khan and Ustad Amanat Ali-Ustad Fateh Ali Khan. He had enjoyed a lengthy association with Ustad Bade Ghulam Ali Khan. After independence in 1947, he joined Radio Pakistan, Dacca and was later transferred to Karachi where he served until his death.
In addition to the knowledge he gained from his own gharana, the experience of accompanying various vocalists of different gharanas enhanced his scope and from a young age, Hamid Husain became a storehouse of traditional compositions (bandishein).
Apart from his artistic excellence, Ustad Hamid Husain was one of the few musicians who were foremost in promoting classical music by generously transferring the art to non-professional learners. He never kept anything away from his disciples. The long list of his professional and amateur students includes Dinaz Minwala, M. Iqbal, Dr Regular Burckhardt Qureshi, flautist Ustad Salamat Husain and Habib Wali Mohammad.
The Ustad was closely related to legendary giants Ustad Mushtaq Husain Khan and Ustad Ahmad Jan Thirakwa Khan. Other famous musicians of his gharana are his younger brother late Zahid Husain (Karachi), his cousin Ustad Sabri Khan (Delhi), his nephew Murad Ali (Delhi) – all sarangi players – and Ustad Zameer Khan (tabla player). Ustad Hamid Husain Khan died in Karachi in 1980 at the age of 57.”
[Late vocalist & composer Ustad Nihal Abdullah was Ustad Hamid Husain’s brother-in-law (sister’s husband, behnoi).]
from: https://sarangi.info/sarangi/hh/ 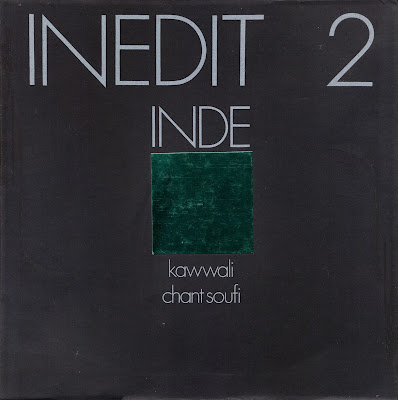 Jaffar Hussain Khan was the greatest Qawwal in India in the last decades. He was an excellent singer, his music was very dense and very touching. He was a representative of an old and very traditional style of Qawwali. Qawwali at its very best. He studied Raga music with his legendary uncle Ustad Mushtaq Hussain Khan (see here two LPs we have posted in 2012) of the Rampur Gharana. He also learned Sitar from Ustad Wahid Khan. Later he learned Qawwali from Ustad Ghulam Ahmad and Ustad Bande Hussain.
He made several tours to Europe, the first one in 1981. In the 1990s a number of CDs by him were published in Germany (Academy of Indian Music), Japan (King Records), France (Inedit, the same label which has released our LP. The recordings of the CD are from 1992.), Holland (Pan Records). Finally also two cassettes came out on Music Today in India, which were later also released as CDs. All these recordings are wonderful.
Wajahat Hussain Khan, a descendant of Jaffar Hussain Khan and grandson and disciple of the great Nissar Hussain Khan of the same Rampur Gharana (see here an LP we posted in 2014), who is here the second singer, continued the tradition. Unfortunately he passed away in April 2014. In India a set of 3 CDs was published recently. Some of these CDs can be obtained from info@raga-maqam-dastgah.com. 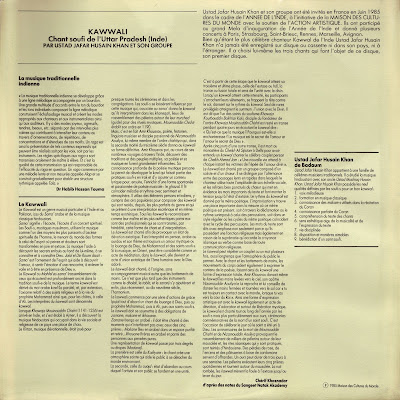 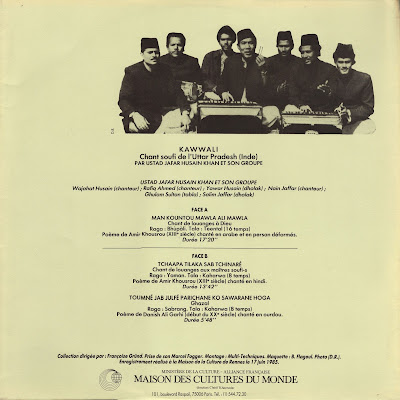 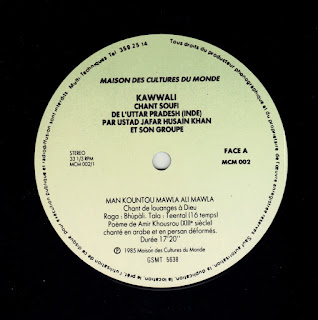 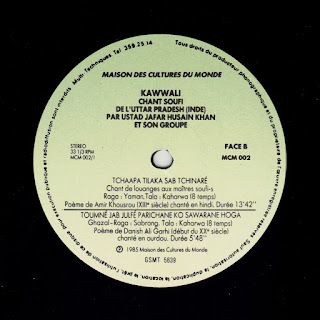 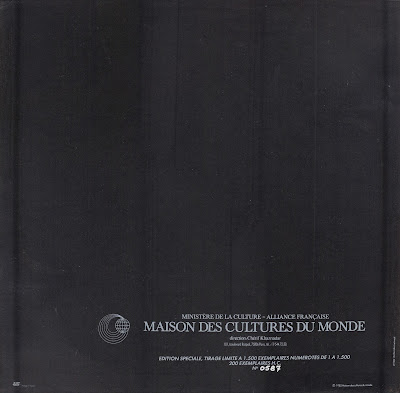