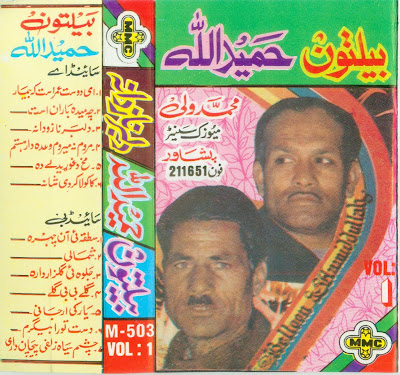 Renowned Afghan singer and musician Biltoon who recorded around 1,000 songs in Pashto and Dari languages during career died in capital Kabul on Monday.
Ismael Saadat an Afghan journalist with BBC and fan of Ustad Biltoon says “Bilton was ruling hearts, his demise will certainly leave a huge void in the hearts of his fans and the Afghan folk music.”
Throughout his decades-long career, Ustad Biltoon recorded several songs for Radio Television Afghanistan (RTA). He was 22-year-old when he recorded his first song “Dil Man Za Amayat Para Para-Ka me Wakhli Khabar Ay Nigara”, a Dari Pashto mixed song, at RTA.
Ustad Biltoon was a talented singer who had memorized more than 200 songs most of which belonged to renowned poet Bahai Jan. Ustad Biltoon mainly had two instructors Ghulam Jailani (see our previous post) and Salam Logari. From Jailani he learnt to play the Rubab and Tanbur.
Born, according to his relatives,  in 1913 (this can't be true; according to other infos he was in his 90s when he passed away. So his birth date was probably around 1923) in Chakri area of Kabul province, Ustad Biltoon was still a child when his parents died. After the demise of his parents, Ustad Biltoon whose original name was Momen Khan moved to Charkh District of Logar province and stayed most of his life there.
from: https://www.khaama.com/afghan-singer-and-musician-bilton-dies-in-kabul-4095/

I still don't know if it is proper to name this music Logari Music. Definitely it is a very fine folk music tradition played by professional musicians and it was very popular in Afghanistan. Hamidullah Charikari comes from the the same tradtion and they often performed together.
In the West never a CD was published by these excellent singers and musicians, or any by one of them or similar musicians of the same tradtion. I think this a missed chance. Now it is too late for well-known reasons. In a recording done in the West one could have insisted on leaving out the Harmonium. Then one would have had a beautiful recording of good singing with an ensemble of Rabab, Tambur, Sarinda and Dhol. The interaction between the musicians is always fascinating. Absolutely wonderful! I've been looking for good examples of Pashto music for a long time, but had so far satisfied myself with what I could find on youtube, including some nice songs by Ustad Bilton. Very happy to have this!

There's actually only one Pashto song on this album - the rest are all in Dari-Farsi.

Dear Arvind,
I will post soon the second volume and some other artists from the same tradition.

Sir, may I ask you a question? Do the cassettes by Bilton & Hamidullah and Ustad Jilani have been recorded in Afghanistan? If yes, when? Unfortunately, I cannot read in Arab, so I am not able to understand the sleeves.

Thank you "en advance" for your answer and thank you one more time for this marvelous blog, really, thank you from my heart.

They have been recorded in Afghanistan, but no idea when as there are no dates or years given on the cassettes. I guess in th 1980s. Maybe earlier. Definitely before the Taliban.

Hi Tawfiq
First of all, thank you very much for this endless goldmine of music you have created with your blog. So much to discover - Thank you! I collect original tapes and 78 rpm grammophone records from Afghanistan (Radio Kabul). I do have a few spare copies of some of the 78s - would you consider trading for some of these tapes?
Kind Regards
Mads

It depends on what it is. Thank you.