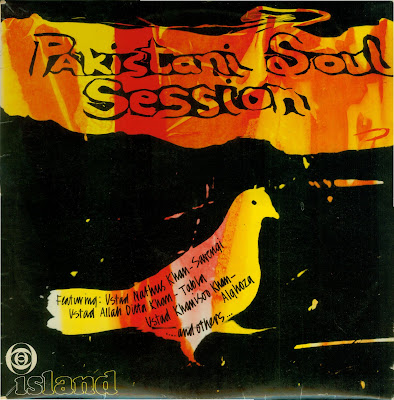 This most wonderful LP was my first introduction to Raga Music in 1968 and took me completely. It was for at least two decades my absolute favourite LP and is till today one of my favourites. From this LP also comes my love for the Sarangi as it has one of the greatest Sarangi players ever. Also noteworthy is the great Tabla player Allah Ditta Khan (1910-1968). Other wonderful musicians: Salamat Hussain Khan, the leading Flute player of Pakistan in these years and the legendary Ustad Khamisso Khan, playing the double-flute Alghoza, a folk instrument of Sindh. 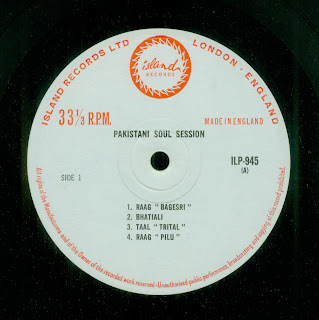 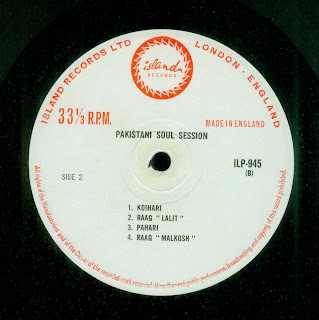 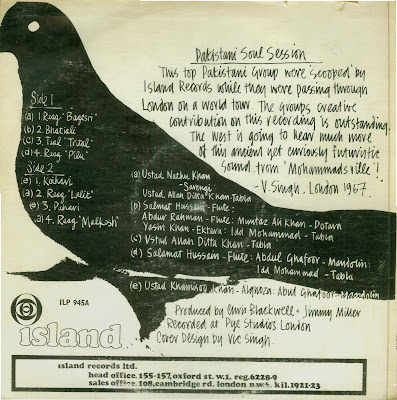 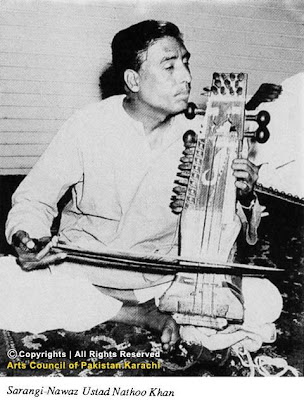 
The illustrious Nathu Khan is perhaps the greatest sarangi player of his time, and his recordings are still gaining popularity and recognition by music connoisseurs of today. He was born in Amritsar in nineteen twenty. His father Baba Ballay was a Tabla player. He got his initial training of sarangi playing from his uncle Ferozdin and other elders of the family. Later he became a formal disciple of the great Ahmadi Khan of Delhi. He also learned intricacies of classical music from Maula Bakh of the Talwandi Gharana. After the partition he became a staff artist with Radio Pakistan, Karachi.
From a very young age he showed great promise, during his very first public performance in a sarangi festival held in Amritsar, his rendition of raga Shudh Sarang was so complete and skillful that all other sarangi players refused to play after him for fear of comparison. He was the master of rhythm, and his Tayyari and Laykari were unmatched. Apart from playing complex rhythmic patterns his Taans were also lightening fast which are still unmatched. He was among the pioneers who introduced solo sarangi playing in Pakistan, known undoubtedly as the best solo sarangi player Pakistan has produced. His rendition of ragas showed his deep knowledge of our classical music as well as his complete command over this difficult instrument. He was also a great accompanist and played with almost all the great vocalists of his time, including Bade Ghulam Ali Khan, Salamat Ali Khan, Nazakat Ali Khan, Ashiq Ali Khan, Roshan Ara Begum and Umeed Ali Khan. Ustad Salamat Ali Khan referred to Nathu Khan as his "camera", admitting his genius as an accompanist, second to none, Nathu Khan was his most favored sarangi player.
Nathu Khan traveled the world over and achieved international fame. He was among the very few sarangi players who were also good at composing and arranging music. He composed many songs for films and radio, during his association with Radio Pakistan, Karachi. As a composer he used the name N.K Naseer. He died in nineteen seventy one after a short illness. His son Mujahid Hussain is also a distinguished composer.
From: http://zohaibhassanamritsari.com/Zohaib_Hassan/Amritsari_Historical_Figures.html 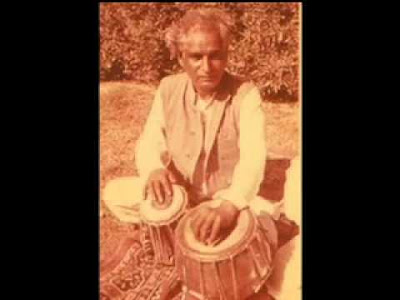 Thank you so much, this must have been quite the band! Its mighty nice that the people at Island Records were able to steal the band away to make these recordings, and even nicer that you've brought it out again. This is a perfect example of the kind of record that can just disappear with time.

Thanks Mr. Axel for your uploads of good quality audio tracks.Best regards.

May I please ask what the name of that instrument is in the accompanying photograph?

There is a title beneath the foto which says: Sarangi Nawaz Ustad Nathoo Khan, which means: Sarangi (the name of the instrument) virtuoso master Nathoo (Nathu) Khan. As you can see that the name of the musician is Nathoo Khan and on that LP there is a musician by that name playing a Sarangi, it should be clear...
On this blog, you also find a couple of other posts by Sarangi players. Just press in the label list on Sarangi and they all will show up, all of them also showing that instrument.

I have a copy of this for sale if anyone is interested! It is NEAR MINT!!!

Thanks. I am from Pakistan - there are greats who have contributed to the music and it currently is as versatile as it was before.

Thanks for contribution once again

Hi Thx very much.
I have a cd I'd like to post here
so that you might be able to share with your readers.
and also that we might be able to determine who it is.
I think it's Pandit Jas Raj but I'm not sure.
with your permission I will put a link as a comment?

You can put the link here in the comments.