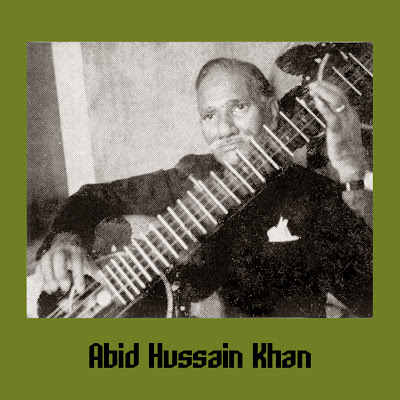 Born in 1907 Abid Hussain Khan was an accomplished vocalist and also a Beenkar (a Rudra-Veena player). He traced his musical heritage from Shri Mishri Singh Rajput of Jaipur who once accompanied Miyan Tansen on Rudra Veena before emperor Akbar. As a child, Abid Hussain Khan had been initiated in music by his father Late Ustad Jamaluddin Khan of Bidar state during the twenties and thirties of last century.
Here  we present four Ragas on two CDs. Only one Raga - Raga Darbari Kanada - is played on Rudra Veena. The others are vocal: the two Ragas on the first CD are sung in Dhrupad style and the second Raga on CD 2 is in Khyal style. The recordings are probably from All India Radio. 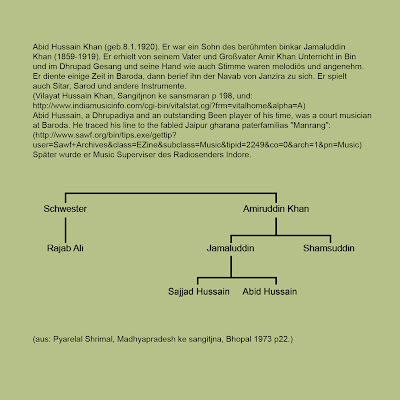 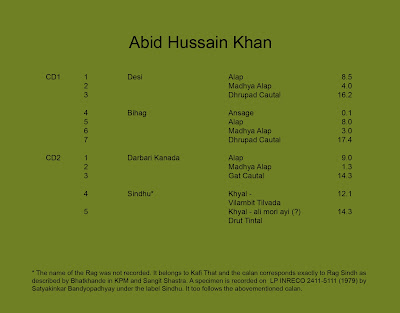 We are very grateful to KF, the original compiler of these recordings, who created these two CDs for his own collection and shared them generously.

Here is another Rudra Veena program by Abid Hussain Khan from AIR, with Bhimpalasi and Desh, uploaded by Povster:
http://www.mediafire.com/?li5jbezl2qw

Late Ustad Abid Hussain Khan of Indore hailed from Baroda and the court of the erstwhile state of the Nawab of Jinjira but had settled down at Indore during forties and fifties of the last century.
Born in 1907 this grandson of Raza Ali Beenkar was an accomplished vocalist and also a Beenkar (a Rudra-Veena player). He traced his musical heritage from Shri Mishri Singh Rajput of Jaipur who once accompanied Miyan Tansen on Rudra Veena before emperor Akbar. As a child, Abid Hussain Khan had been initiated in music by his father Late Ustad Jamaluddin Khan of Bidar state during the twenties and thirties of last century.
In prime of his youth, he became the court-musician of the Nawab of Jinjira, a Muslim state in the coastal area of Maharashtra where he lived in a cottage facing the rolling waves of the Arabian Sea. Perhaps the resonance of his voice, and his own style of Alap and taking Taans reflecting the elegance and grace of an ocean, was due to this.
A versatile genius, Ustad Abid Hussain Khan could sing Dhrupad and Dhamar, Khayal, Tarana, Tappa with competence. His singing enamoured the audience while reaching rare heights. The manner of Alap came to be recognized as Bidar ang with its distinctive development by gliding from Mandra Saptak to pause at Shadja and gradually ascending toward Madhya Saptak where he stayed considerably. The swara-s he applied were graced with nuances (Kana) and Meend. After a relaxed immersion in the lower and middle octaves, Khan Saheb touched the Tar Saptak, yet plunging back to Mandra and Madhya at times. The Alap in Dhrupad and Dhamar was given ample time to establish notes and relationships. The Alap done in a pleasing and interesting manner, it never tired the patience of the audience. His pronunciations established his Dhrupad lineage from Khandarbani explaining his use of Nom Tom for alap.
When he sang a Khayal or Tarana his Alap was brief, yet he continued to be dynamic and graceful in compositions; in Bol-s and Bol-taan-s, he applied Gamak with force of thunder and lightning. In his Tan-s he was equally graceful, elegant and forceful.
Not only the style but his very persona underwent a change when he sang a Thumri, a Dadara or Hori. Invariably each performance was totally subjective and its intense intimacy touched the hearts of each member of the audience.
Khan Saheb preferred common and well-known Raga-s in his concerts. Mostly, the Raga-s were Bilawal, Malhar, Todi, Malkauns, Megh, Darbari, Kaphi and Chhayanat. His compositions were mostly in Teen-tal, Tilwada, Jhoomara and Ada Chautal. He also gave a few memorable concerts singing less common Raga-s like Barwa, Khat, Durga, Shankara and Jhinjhoti.
Shri Vimal (Bimal) Mukherji (Sitar-player), chief among his illustrious disciples is the foremost representative of the Gharana. His prominent representative for vocal style is Bhavyanand Bhatt of Indore who has retained the charm and uniqueness of His Ustad’s Khandarbani style. His accompanists were Late Ustad Alladiya Khan in Sarangi, Pt. Ambadas Agle Pant on Pakhawaj and Ustad Dhulji Khan on Tabla. Among the living generation, Ustad Moinuddin Khan had accompanied him on Sarangi and Ustad Yusuf Khan on Tabla.
from: http://www.omenad.net/page.php?goPage=%2Farticles%2Fabidhussain.htm

About Jamaluddin Khan
Jamaluddin Khan was the son of Reza Ali Beenkar of Jaipur. The family traces its root to the Seni Gharana. Descendents of Tansen selected Rudra Veena for members of the family; to other disciples they taught Surbahar and Sitar. Jamaluddin had mastered the art and became a court musician at Baroda. His performance at Music Conference held in Baroda in 1916 was excellent and remained in memory of listeners. He trained his son Abid Hussain in Been as well as vocal music.
from: http://en.wikipedia.org/wiki/User:Ghanonmatta/Musicians

For more information on the Rudra Veena, its masters and its history see:
http://www.rudravina.com/
Posted by Tawfiq at 08:22

it's going to be a good day today, now we have the third portion of this very tasty "Three Been Salad". As ever, big thanks Tawfiq and KF

Thank you for these rudra veena posts. Much appreciated!

Wow! Thank you, Tawfiq - as always!

Million Thanks to you are not enough for this series....GOD Bless...

What fantastic renditions! Thanks a lot! Been listening to him all day today!