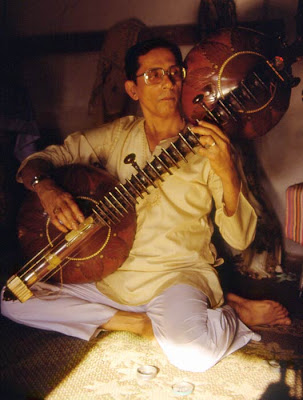 
Here we present two Rudra Veena masters from Dharwar in South India: Shrikant Pathak and R.V. Hegde.  Both are students of Pandit Bindu Madhav Pathak (1935-2004), an exponent of Rudraveena and Sitar.
Dr Bindu Madhav Pathak was the son of a great Rudra Veena player Pt. Dattopant Pathak and hails from Hubli. He obtained his early training from his father (pupil of Late Ustad Murad Khan Beenkar of Jawara) and later from Ustad Rajab Ali Khan of Dewas. Both Ustad Murad and Rajab Ali Khan were students of the great Rudra Veena player Ustad Bande Ali Khan.
BMP blossomed into an accomplished artist at a very young age of 17. He was a top 'A' grade artist of AIR. He performed in several National Music Programmes of AIR and Doordarshan. Some of his students are his son Shrikant Pathak, Ramchandra V Hegde and Jyoti Hegde. He was Head of Dept. of Music in Karnataka University, Dharwad.
Pt Pathak was heavily influenced by the vocal music of Kirana Gharana (that of Abdul Wahid Khan). He insisted his gharana to be Kirana, and not formally associated with any Dhrupad gharanas. He said he played Khayal style (Kirana type) of music on Been.
Mr. Pathak, who retired as the Head of the Department of Music of Karnatak University, was popularly known as "Been" Pathak for his expertise in playing the Been. Apart from performing for Akashwani and Doordarshan, he was a recipient of several awards and titles including the Karnataka Kala Tilak Award, Aryabhata Award, and "Vidyaparipoorna" title. He also served as adviser to the Union Ministry of Education and Culture .
Mr. Pathak wrote many books and articles on music, including Bharatiya Sangeeta Charitre. 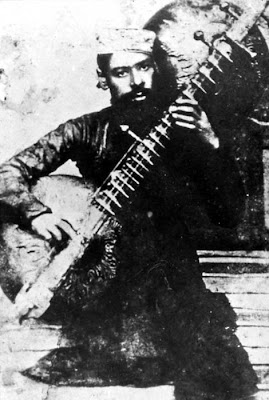 
He belonged to the Khyal Ang Rudra Veena tradition. Khyal Ang on veena began mainly with Bande Ali Khan (credited: 1826-1890). An innovative and iconoclastic musician, Bande Ali Khan was particularly fond of khyal singing, which he adapted to the bin, the instrument having until then been solely used to interpret the dhrupad style. 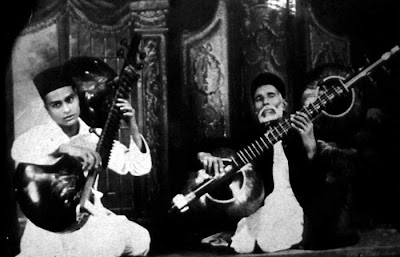 Murad Khan (on the right) and his disciple Krishnarao Kholapure


His student Murad Khan was the one who propagated this unorthodox innovation through the state of Maharashtra. Hindraj Divekar, Bindumadhav Pathak, Jyothi Hegde, and a number of other beenkars belong to this tradition and play khyal and dhrupad ang.

Another point to note is these people including Bindu Madhavji played a been manufactured in Miraj (Maharashtra), whereas others like Bahauddin Dagar play ones from Kolkatta (from what I know).

Information collected from a Dhrupad enthousiast from Hubli, Dharwar, from the book "Rudra Veena: An Ancient String Musical Instrument" by Pandit Hindraj Divekar (see here) and from the excellent website: http://www.rudravina.com/
See also here.
The fotos above are from the website www.rudravina.com.

As we were not able to find any recordings by Bindu Madhav Pathak, we present here two musicians belonging to his tradition: his son Shrikant Pathak and his student R.V. Hegde. The music is from All India Radio. We found the recordings a while ago in the internet. Unfortunately we don't remember the names of the original uploaders.


Shrikant Pathak took Been playing professionally. He has an MA in music and holds a Ph.D. He teaches Sitar at Pandit Panchakshari Gawai music college run by Veereshwar Punyashram, Gadag.

Ramachandra V. Hegde was born in 1953 at Halladkai in Sirsi Taluk, Karnataka in a family with a rich musical background. His grandfather was a well known musician in that area and as a child he grew up in a house steeped in music. He began learning Hindustani Vocal and is an accomplished singer but was fascinated by the Sitar. His love for the Sitar made him give up singing and soon he began his training under Pt. (Dr.) Bindu Madhav Pathak, a well known Sitar and Rudraveena player of the Bande Ali Khan Gharana. Under Pt (Dr.) Bindu Madhav Pathak’s guidance he soon learnt the intricacies of the Sitar. He was also lucky enough to get a guru who was an accomplished player of the Rudraveena.
The Rudraveena is not an easy instrument to master and there are only a handful of artists who play the Rudraveena. Under Pt (Dr.) Bindu Madhav Pathak’s guidance, Ramachandra Hegde was able to master both these classical Indian Stringed Instruments.
Apart from playing the Sitar and the Rudraveena, Ramachandra Hegde believes in keeping the music of the Rudraveena alive for generations to come. He teaches music and trains young pupils from all over the country. Many of his students have gone on to become All India Radio Artists themselves.
from: http://www.angelfire.com/planet/rudraveena/Rudraveena/index.blog/1266513/rudraveena/

If anybody has more information or more recordings by these artists or other artists from this tradition, please share.

Addition of 19th of january 2018:
Just found on YouTube an extremely difficult to get CD by R.V. Hegde, posted by the label in CD quality: https://www.youtube.com/watch?v=1WmGlRWSUrM&t=9s

Recently in India a CD by Jyoti Hegde was published: 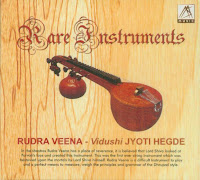 Unfortunately the label put a picture of the Saraswati Veena instead of the Rudra Veena on the cover.
Posted by Tawfiq at 01:51

love your blog :) reminds me of the concerts i used to see when i was at soas in the 90s... (sadly not studying music!)

however according to rapidshare:

This is the same for all your posts :(

According to the announcement at the end of R V Hegde's rendition, the tabla player is Raghunath Nakod.