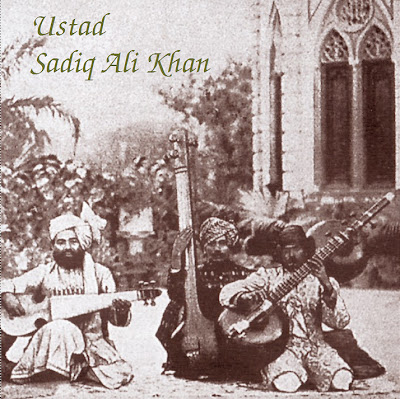 Sadiq Ali Khan (1893-1964), a renowned Veena player, was born in Jaipur. He studied at home mainly under his grandfather Ustad Rajab Ali Khan. He was a court musician of several states including Jhalawar, Alwar and Rampur. He was expert in Alapa and liked depth in music. Unlike many other musicians he disliked percussion competitions. He had nine children by his first wife, but unfortunately, all of them except a daughter, Khurshid Jahan, died young. Asad Ali Khan was the son by his second wife. He was a bosom friend of Vilayat Husain Khan (Agra) and Ayodhya Prasad, the well-known Pakhawaj player of Uttar Pradesh. He died in Rampur on July 17, 1964.
From: Musicians of India by Amal Das Sharma, published by Naya Prokash (1993)
from: http://www.parrikar.org/vpl/?page_id=464 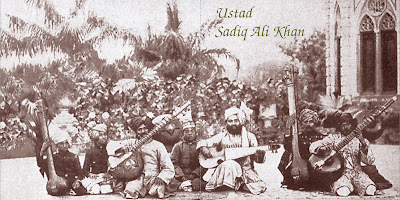 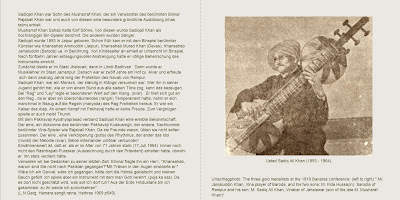 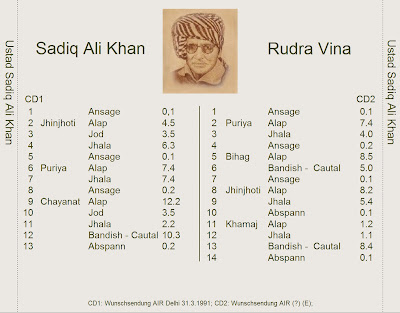 We are very grateful to KF, the original compiler of these recordings, who created these two CDs for his own collection and shared them generously. Recordings on CD 2 courtesy of VN.

Ustad Rajab Ali Khan & His Descendants
In the last centuries the court of Jaipur was the musical center of Rajastans. The generous patronage of Maharaja Ram Singh II assembled in his ruling times (1835 - 1880) numerous instrumentalists, vocalists and dancers in Jaipur. Among them was the Binkar Ustad Rajab Ali Khan, who was teaching also the Maharaja himself on the Bin.
Since Ustad Rajab Ali Khan did not have a son, he passed on his art to his nephew Ustad Musharaf Ali Khan, who became later court musician in Alwar. Ustad Musharaf Ali Khan performed as one of the first Indian musicians in Europe - 1886 in London. Around the beginning of the 20th century he and Ustad Jamaluddin Khan where two of the most famous Veena players of the country. His golden painted Veena can still be found today in the Alwar Palace Museum.
Ustad Sadiq Ali Khan (1883 - 1964), one of the five sons of Ustad Musharaf Ali Khan, took over the position of his father in Alwar after his death. Later he shifted to Rampur, another famous musical center. Here he lived until the end of his life as court musician of Nawab Raza Ali Khan.
At the court environment of Rampur also his 1937 born son Ustad Asad Ali Khan was growing up. At the age of ten he began his lesson on sitar. Four years later his father started to teach him on the Rudra Veena. It followed another thirteen years of intensive schooling and practice (riyaz) in which he also accompanied his fathers concerts.
Ustad Asad Ali Khan is today the last famous musician who combines the mastery of the traditional Been techniques with profound knowledge of the raga. His family tradition makes him also to be one of the last representatives of the Khandarbani, one of the main styles of the Dhrupad.
This mainly on the Been played style is known for the precise control of the microtonal fineness and the simultaneous ornament rich development of the melody. With worldwide concerts and classes to Indian and Foreign students he works for the continuation of the Rudra Veena tradition. His nephew Zaki Haider lives and learns with him since his childhood. Beside that Ustad Asad Ali Khan teaches also some other disciples on the Rudra Veena.
from: http://taal.20m.com/rajabalikhan.html


For more information on the Rudra Veena, its masters and its history see:
http://www.rudravina.com/
Posted by Tawfiq at 19:36

A really wonderful series you're doing, here...thank you!

ah magic, part 2 is here. gonna be blasting the been again today. many thanks Tawfiq and the Mighty KF

These are the real treasures - Many thanks