Mohammad Reza Shajarian - Mahur - Concert in 1989 - Cassette produced to be sold at the 1989 European tour. 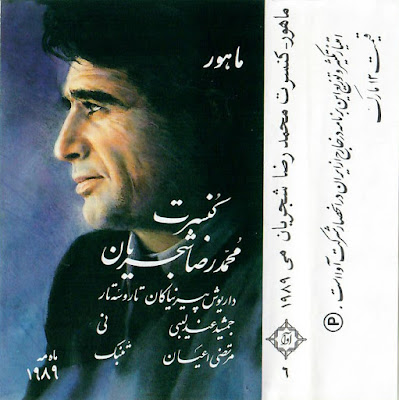 Here a concert by the very well-known Mohammad Reza Shajarian (born 1940), a very accomplished singer who touched publics world wide with his very refined, deep, introverted art. The 1989 tour was especially noteworthy as the repertoire and the musicians were the most traditional imaginable. He was accompanied just by a trio of very traditional artists.
Especially Dariush Pirniakan, the Setar player, is a great master of both the Tar and Setar. He studied with the great Radif masters of mid last century, especially Ali Akbar Shahnazi, more or less the same masters Dariush Tala'i had, but he seems to stick even closer to what he had inherited. Mahoor released a while ago two solo CDs by him, both on Tar, both outstandingly beautiful. He worked in the late 1980s and early 1990s very closely with Shajarian and made about seven CDs with him: the three volumes from this tour of 1989, first published as cassettes, in Mahur, in Abu 'Ata and in Bayat-e Zand & Afshari, from the tour a year later one in Shur with the same group except that as Tombak player for the first time Shajarians son Homayoun Shajarian appeared. And then three CDs with Ensemble Ava under his direction: "Aram-e Jan" - Concert in Afshari, "Rosvaye Del" - Concert in Segah and "Aseman 'Eshgh" also in Segah.
The other two musicians are Jamshid Andalibi, a fine Ney player, and Morteza Ayan, who plays very elegantly the Tombak.
I was at a couple of these concerts and bought this cassette at their concert in Cologne. In total I saw over the years at least fifteen concerts by Shajarian, most times with my wife who loved his music very much. At the last ones I was a little sceptical if the concert would still touch me and went there mainly because my wife wanted to go, but it always did touch me surprisingly strongly. He is a strongly introverted artist and hardly moves, everything coming from the chest. The maximum movement I noticed was that in very intense moments his hand would rise about a centimeter or two from his knee and then fall back on it again.

On the artist see:
https://en.wikipedia.org/wiki/Mohammad-Reza_Shajarian
http://www.iranchamber.com/music/mshajarian/mohammad_reza_shajarian.php
He published over 30 CDs and DVDs. There exist also some books written on him and his art. In 2016 we posted another cassette by him.

One good thing about the 1979 revolution in Iran related to music: as popular, westernised and night club (casino) music was forbidden, including the entertainment version of classical Iranian music played on the radio, a young generation educated by the great Radif masters at the Center for Preservation and Propagation of Iranian Music received an enormous chance to come forward. Starting in the early 1980s singers like Shajarian and many others and instrumentalists like Dariush Tala'i had many cassette and later CD releases and had many chances to give concerts. In this era also the publication of the existing recordings of the great masters, who were completely ignored before, started in exemplary editions. The only downsize: female singers were not allowed to perform in public, except for a purely female public.

The concert here consists of a long Dasgah Mahur with these sections: 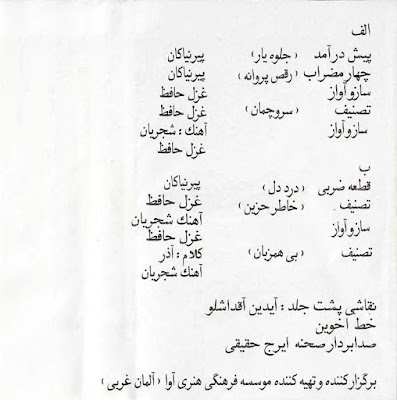 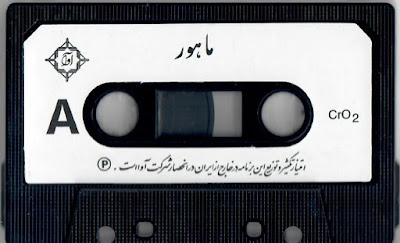 This recording is amazing ,thanx a lot
Anyone know the name of the last tasnif ,at the end of the concert?

The name of the last Tasnif is "Bi Hamzaban", the poem is by Azar, the music is composed by Shajarian himself.

Thanx a lot,i wonder what the lyrics say...

Thanks a lot, as always, Tawfiq!
I think I saw one concert from this tour, at Gürzenich concert hall in Cologne. I sat in the very last row, that time, unfortunately, but it was a fantastic experience nevertheless.