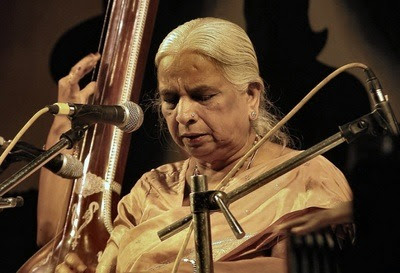 VARANASI: Demise of great vocalist and Thumri queen Girija Devi came as a big shocker to the music lovers of Varanasi, the birth place of the eminent singer. Girija Devi, fondly known as Appa ji, passed away in a hospital in Kolkata on Tuesday evening. She was 88.
"It is an irreparable loss to Indian music and Banaras Gharana of music. She was a guiding figure for us," said noted Sarod player and Yash Bharati recipient Pt. Vikash Maharaj. "She was ailing for some time, and admitted to BM Birla Hospital in Kolkata in the morning. She left for the heavenly abode in the evening," he said adding that she had been living in Kolkata with her daughter.

"No one can fill the gap. Even at 88 her scintillating voice could leave the audience spell bound. She was perhaps the last exponent of thumri, tappa, chaiti and khayal. I heard her singing in an award ceremony in New Delhi on August 27," said Ashok Kapoor, founder of a cultural organization Kala Prakash working for the cause of Indian music.
Though settled in Kolkata, she regularly visited Varanasi. She was born in Varanasi in 1929. She took lessons in singing khayal and tappa from vocalist Sarju Prasad Misra in early childhood. She worked as a faculty member of the ITC Sangeet Research Academy, Kolkata in the 1980s and of the Banaras Hindu University during the early 1990s. She was a prominent performer of purabi ang thumri style of Banaras gharana. She was awarded Padma Vibhushan in 2016.
from: https://timesofindia.indiatimes.com/india/demise-of-girija-devi-an-irreparable-loss-to-banaras-gharana/articleshow/61211761.cms

Here we post in her memory a program from All India Radio (AIR), Delhi, broadcast on 7th of July 1989. This program is quite unusual as it contains just two longer performances in the Khayal format.
First we had posted here a CD from 1990. Because of our rule not to post commercial CDs on this blog we decided to replace it with this AIR broadcast, of which I was not aware that I had it. Just dicovered it now. We received it a while ago from our friend KF. All thanks to him and his generosity.

this is amazing
thank you

Very generous of you to share this album Tawfiq saheb.

Many thanks Tawfiq ! A fitting tribute !

Here is a great french documentary (with english subtitles) about Bénarès (Varanasi), with (among other great artists), Girija Devi:

Very sad...a great treasure of Hindustani music, and one of the last, sadly, in my opinion ! "The Queen of Thumri" rendered wonderful compositions, mainly in Braj Bhāshā dialect (sort of vernacular, traditional Hindi, still spoken around Varanasi/Benares). I would rank her at same level with other recently passed maestros of this generation : Bismillah Khan, Ali Akbar Khan, Vilayat Khan...RIP

Still looking for a lossless rip of "Basant Ritu Aayee", 1995 CD. Didn't find anywhere to to buy it in FLAC/ALAC format.

A documentary about Girijaji has just been uploeded on Youtube :

Great stuff! Seems like we run similar type of blogs too. I hope we can be friends and inspire each other in our musical quests :) http://endangered-records-index.tumblr.com

It has taken me some time to get into this lady, but now I am deep in love with her... No doubt: a great loss. Thank you for having discovered her singing to me, Tawfiq. I hold your hand..

Dear friend,
You are doing very great service of society. I have a programme Sangeet Sarita in all india radio vividh bharti series Meri Sangeet Yatra by Girija Devi. If anyone wants, I can upload. Thanks.
Dr. Kuldeep Kumar.

That would be very appreciated. Thank you.