The great Sarangi player Ustad Sultan Khan (1940–2011) passes away on 27 November 2011 - In his memory a radio broadcast from Deutschlandfunk, Cologne, on November 10, 1994 with Zakir Hussain on Tabla 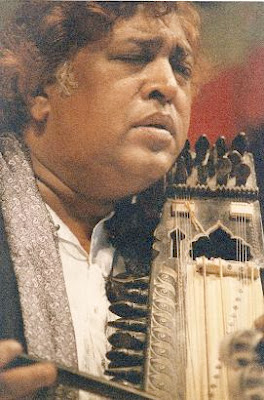 The Padma Bhushan awardee, 71, who hailed from a family of sarangi players in Jodhpur, was on dialysis for some time, family sources said.
His funeral will take place in Jodhpur tomorrow. Credited for reviving sarangi, Khan is famous for his extraordinary control over the instrument and his husky voice. He started performing at a the age of 11, and later collaborated at the international level with sitar maestro Ravi Shankar, on George Harrison's 1974 'Dark Horse World Tour'.
Khan's was a family of sarangi masters from Rajasthan. He was initially tutored by his father, Ustad Gulab Khan. Later, he trained under Ustad Amir Khan, a classical vocalist of Indore gharana (school).
After establishing himself as sarangi player, Ustad Sultan Khan also worked with musicians from the Hindi film industry, such as Lata Mangeshkar, Khayyam, Sanjay Leela Bhansali apart from collaborating with musicians in the West.
Apart from Padma Bhushan, Khan won numerous musical awards including the Sangeet Natya Academy Award twice, the Gold Medalist Award of Maharashtra and the American Academy of Artists Award in 1998.
Khan was also a members of the Indian fusion group Tabla Beat Science, with Zakir Hussain and American bassist Bill Laswell. His son, Sabir Khan is also a well-known sarangi player.
http://www.thestatesman.net/index.php?option=com_content&view=article&id=391430&catid=35

Ustad Sultan Khan was one of the most beloved musicians of his generation, beloved because of his deeply emotional music and the exquisitely beautiful sound of his instrument. I had once the good fortune to sit - in a concert in the early 80ies or late 70ies in Düsseldorf - in the first row, just about 1 or 2 meters away from him, and remember still very vividly how impressed I was by his being so deeply immersed in his music.

The Call of the Kokila
In his memory a radio broadcast from Deutschlandfunk, Cologne, on November 10, 1994 with Zakir Hussain on Tabla.
Raga Maru Behag (47:28)
Rajasthani folk song (10:15)

thanks for this, Tawfiq. although he hadn't been well for a while the Ustad's passing still saddens me. he is someone whose recordings I always return to for the emotional kick they always seem to give me. i did meet him a couple of times at concerts, just to mumble my hellos and star-struck appreciation. he seemed like a nice guy, even to an erk like me :-)

thank you for this but I am having trouble downloading the file. Is anyone else having problems?

I just checked the download and it is working perfectly fine. By now - 2 days after posting the file - already 88 people downloaded it, I guess successfully...
Please try again.

Dear Mr. Axel, Thanks for posting one of the favorite raags of My teacher U. Sultankhan. I cannot resist posting his smiling pic taken 10 months back.

Thanks.. Excellent Blog... and priceless collection.

A beautiful and moving remembrance, Tawfiq Sahab. Thank you very very much.

Very glad to find that you are using the photograph I took of Khansaheb at the 1985 Sawai Gandharva Festival...if it's not too much trouble, please attach a photo credit for Warren Senders.

just discovered your blog. amazing oasis of music.
saddly, every single upload seems to have been deleted, no matter what i have tried.

is this this aftermath of the megaupload sabotage?

The last one - Wupload - works. It seams that a lot of things have changed in recent times. I'm thinking about deleting my blog, as I don't like at all what's going on.

Thanks for pointing out wupload to me, I spoke too soon.

Many of my favourite blogs have also been dismantled or shut down lately.
Blogs such as this are a service to great music and help keep that music slightly more visible to the curious general public, in this sea of lady gaga we live in.

This should be considered a museum of sorts, not a crime or anything dastardly.

Hope you don't close your blog, but thanks for all the work you've done just the same.

When sarangi player ustad and zakhir Husein tabla player music combinations are play that time we never missed because this music really remove all things from mind and we must listen this tune.I really like to listen this combinations.

I had the pleasure of meeting the great Ustad Sultan Khan in London through his vocal pupil Kalim Sheikh. Like all the truly great musicians of his era, he was a humble and generous man as well as brilliant musician and teacher. He played for me on my BBC radio show and composed and performed an original score for my TV docu-drama on Noor Inayat Khan. Always very gentle, committed and a beautiful spirit. I will treasure these memories and his music.

PS Tawfiq Bhai, this is a great blog and you deserve all our thanks.

Only just found this blog, and happy to find this link still working. Thanks for this beauty.