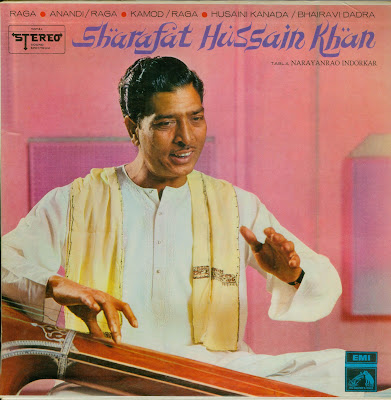 The last great singer of the glorious Agra Gharana 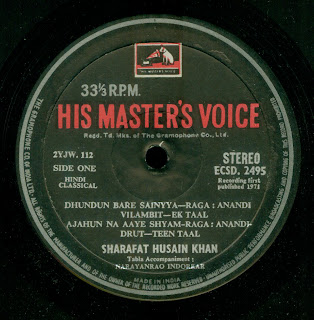 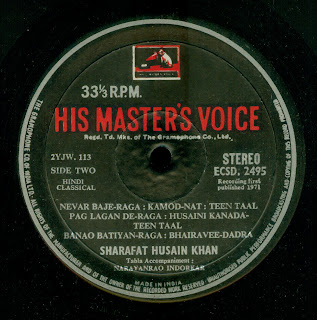 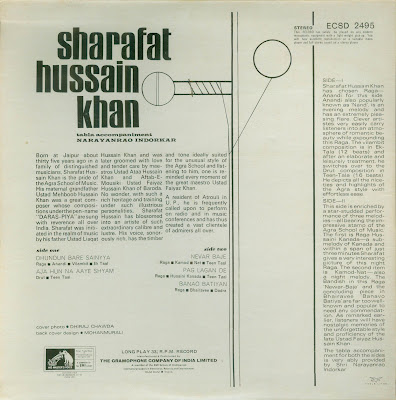 Sharafat Hussain Khan (1930 - 1985) was amongst the most brilliant Khayal vocalists of the post-independence era. He represented the Agra Gharana (stylistic lineage), and was unanimously regarded as the most illustrious heir to the legacy of his principal mentor, the legendary Ustad Faiyyaz Khan (1886 - 1950).
Sharafat Hussain Khan was born in July, 1930, to Ustad Liaquat Hussain Khan, a court musician in the erstwhile Jaipur State, and Alla Rakhi Beghum. From his father's side, Sharafat was a descendant of Inayet Hussain Khan (1845 - 1936), founder of Atrauli Gharana, and from his mother's side, and of his maternal grandfather Mehboob Khan (Daras Piya), also of the Atrauli Gharana, but whose music was greatly influenced by the Rangile Gharana of his mother's family, founded by Ramzan Khan (1759 - 1806). In early childhood, Sharafat was trained by his father. When Sharafat was only eight years old, his prodigious talent impressed the legendary Faiyyaz Khan during one of his visits to Atrauli. The maestro, without a son despite three marriages, adopted Sharafat, and took him away forthwith to Baroda to groom him as his heir.
Sharafat was a child prodigy, who rose meteorically after his adoption by Faiyyaz Khan. At the age of eight, he made a stunning debut at the influential Matunga Music Circle in Mumbai. This triggered off invitations to perform at the All India Music Conference at Allahabad, and the All Bengal Conference in Kolkata. When he was eleven, he was hailed as the "Rising Sun" of vocalism at the Gaya Conference. By the age of twelve, he has made his first disc with HMV/ EMI, and topped the prestigious Baroda State Music Competition.
Sharafat was only 20, when Faiyyaz Khan died. Thereafter, he started studying with his maternal uncle, Ustad Ata Hussain Khan of the allied Atrauli - Rangile Lineage. Soon thereafter, he acquired a third guide - his scholarly father-in-law, Vilayat Hussain Khan of the Agra Lineage. Thus, like his foster-father, Sharafat Hussain came to represent a magnificent confluence of three intimately connected lineages - Agra, Atrauli, and Rangile.
While still in his 30s, Sharafat became amongst the busiest vocalists in India, and enjoyed a continuous run of sucess for two decades (1965 - 1985). Along with popularity came the honours. He was made an Honorary Fellow of the Performing Arts Academy of Uttar Pradesh (Northern Provinces) and decorated with the Padma Shree by the President of India. In 1985, Sangeet Natak Akademi ( The National Performing Arts Academy) held a special ceremony to honour him shortly before he succumbed to lung cancer at the age of 55. He also got a Tansen Award.
from: http://www.purnimasen.com/guru.htm
Posted by Tawfiq at 14:20

thank you very much, tawfiq, for this excellent rip and for posting these wonderful recordings of the great agra maestro!

it is really puzzling to see that a record label like bihaan released the same recordings on the 'inheritance' album (the cd contained also recordings of ustad yunus hussain khan), but the sound quality of that issue is really put to shame by your rip. i cannot think what source they used for that cd!

just one thing: it seems that the file labeled as kamod is hussaini kanada and viceversa, but that's really nothing to worry about (just think that bihaan labeled the hussaini kanada as sughrai!)

again, thank you very much for this particular post and, of course, for the whole great blog that you built up here!

Thank you. I know the Bihaan CD. I guess they copied from an old quite bad cassette without knowing that the recordings were originally from an LP. Because in that case there would have been also the question of copyrights being violated.
An Indian friend who had my copy of the LP for a while in effect had posted a small label on the backside of the cover hinting that the 2 Ragas were inverted. But I could not ask him anymore about it as he has passed away in the meantime.
Bihaan has two other CDs by Sharafat Hussain Khan which are quite satisfying and Sangeet Kendra has published a set of 4 CDs from an allnight concert, also very satisfying.
They can be obtained in Europe (and the US) from:
info@raga-maqam-dastgah.com

While playing Track 3-Raga Bhairavi (Dadra), there is a lot of clicking sound. Is it a problem in the original recording itself ? is anybody else experiencing the same ?

thanks once again for all the wonderful music,

Sorry, didn't notice it before. I uploaded from a CD copy that was made already about 10 years ago. That kind of clicking sound CD-copies start to have sometimes when they are around 8 or 10 years old and it can get worse and worse. When I have the time I will replace it with a new version.
The RS & AAK recording you mentioned I don't have.

Thanks for your prompt reply.

Please take your time to replace the recording with a new version, in no hurry.

To you too a very blessed Eid. Thank you.

I uploaded now a new version. Sorry to all for the inconvenience.

Thank you so much for this and many other wonderful recordings. Just going through it now, I note someone already mentioned the mislabelling, but the `hussaini kanada which should be kamod` isnt kamod, its Nat Kamod; the famous bandish nevar baajo.