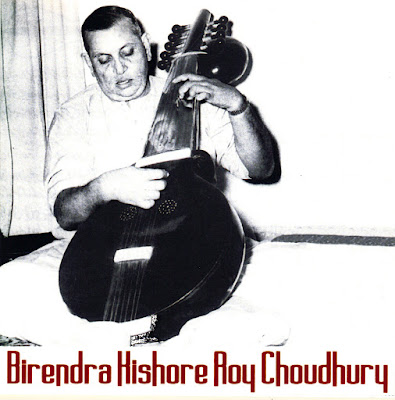 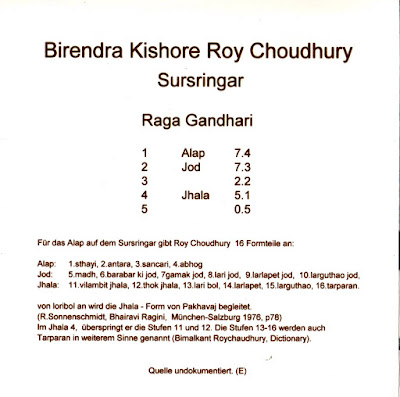 In 2014 we posted already two recordings by Ustad Allauddin Khan and Radhika Mohan Maitra, in which they play the rare Dhrupad instrument Sursringar. See here. There exist only very few recordings of this instrument. In 2013 we posted a LP which had on the second side a track played on the Surshringar. See here. Now we present another recording by the amateur musician Birendra Kishore Roy Choudhury. I received this recording many many years ago on a cassette from VN, a collector of Dhrupad recordings in UK. My friend KF digitalised the recording and made a nice cover for it.

"Pt. Birendra Kishore Roy Choadhury (~1901-1972?) was from a family of wealthy zamindars (landowners) in East Bengal, what is now Bangladesh. The estate was called Gouripur, in the Mymensingh district. His father, Brajendra Kishore Roy Choudhury, was renowned as a patron of musicians. His son not only continued this tradition of patronage, but became the disciple of many of the great musicians of his time, including Mohammed Wazir Khan, the great Binkar of Rampur and the last descendant of Tansen's daughter Saraswati; Mohammed Ali Khan who was the second son of Basat Khan; Imdad Khan, founder of the lineage of sitar represented today by his grandson Vilayat Khan; Allauddin Khan, father of Ali Akbar Khan and Annapurna Devi and guru to Ravi Shankar, and Hafiz Ali Khan, the great sarod maestro. Birendra Kishore Roy Choudhury was a master of the Dhrupad style, especially in instrumental music, and played the Bin, the Sursringar and the Seni Rabab."
From: http://davidphilipson.com/pages/TansenBook.html

David Philipson shares on this link a very interesting small book "Indian Music and Tansen" by Birendra Kishore Roy Chowdhury, which I made into a pdf file. See download link below.

See here a Raga Barwa by him on Rudra Veena: https://www.mediafire.com/?stpc5rgt65o4i#09nezectr2f4o
Posted by Tawfiq at 10:17

Thanks. Sorry, but link doesn't works.

Only the wave link didn't work. It's now corrected. Thank you very much for making me aware.

Thx for the wave link!

Thanks a lot Tawfiq for this new finding for me!

Many thanks! What a pleasant surprise to find another recording of my dada-guru that i was not aware of.

Thank you very much for this. Birendra Kishor Roy Choudhury is a name that i'm familiar with; since the maternal side of my family hails from Mymensingh. However this is the first time that i'm getting to hear any music played by him.