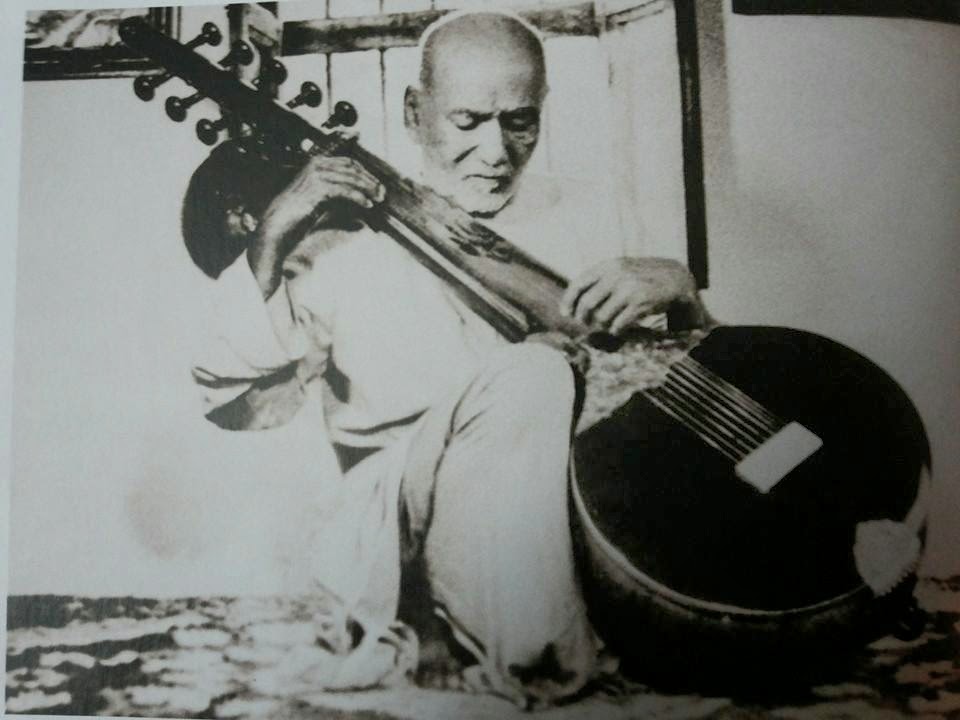 Sursringar is a very rare instrument from India used in the past as an instrument for Dhrupad style Alaps. It got forgotten and nearly extinguished in the second half of the 20th century. Nowadays there a number of younger artists, basicly Sarod palyers, who occasionally play this in strument, but almost always like a Sarod.
Here we present two older recordings by two great masters. Both have strong Dhrupad backgrounds, the first through his teacher, the Beenkar Ustad Wazir Khan of the Senia Gharana (direct descendant of Tansen), the second through one of his teachers, the Beenkar Ustad Dabir Khan, grandson and student of Wazir Khan. These recordings we found a while ago in the internet. Many thanks to the original uploaders: the first one I don't remember unfortunately, the second one being Abhimonyu Deb from Kolkata. A note about the pictures: normally the Sursringar is hold against the left shoulder, but because of Ustad Allauddin Khan being lefthanded he holds it to his right shoulder. 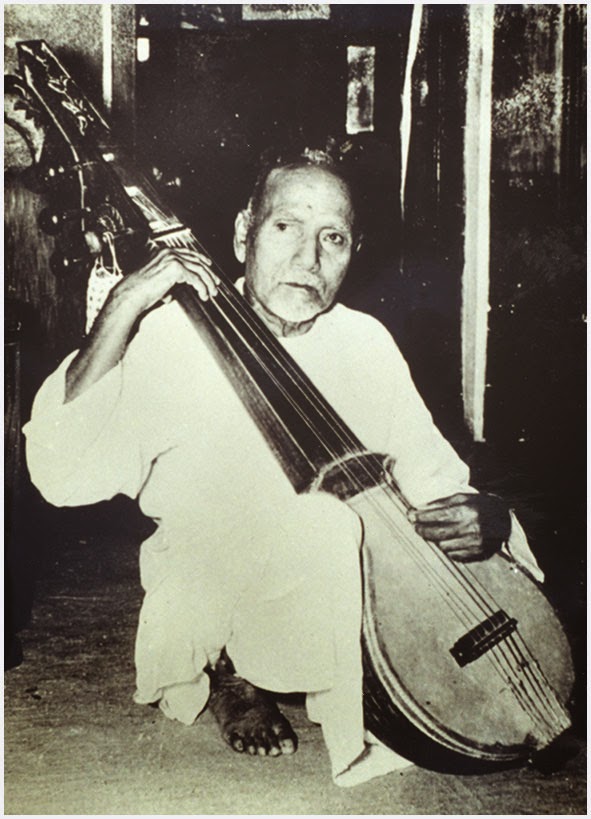 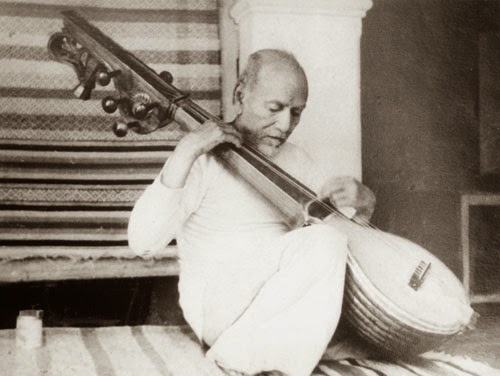 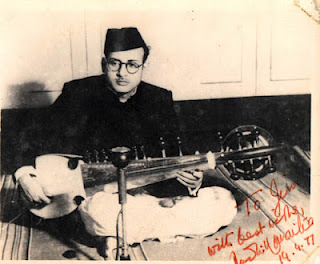 Another instrument that appeared in Hindustani music in the early years of the nineteenth century was the Sursringar, which was analogous to surbahar.
Sursringar is a modified version of the Seniya rabab. The instrument rabab had some limitations. Its gut strings and skin parchment upon the resonator make the slow passages of alapchari, impossible unlike the been. Moreover, due to the dampness in the monsoons, the sound of rabab used to deteriorate so much that the notes played on it could not even be discerned. In Sursringar, the skin parchment of the resonator had been replaced by a wooden sound board, the gut strings by those of steel and the wooden fingerboard was covered with a thin iron sheet. With these modifications Sursringar became a distinct improvement over the rabab with regard to the tonal quality and for the alapchari of dhrupad anga. These modifications, in the rabab were carried out by a descendant of Tansen's named Jaffar Khan.
Sursringar was well-suited for vilambit (slow) alap, and the techniques of both veena and rabab playing could be incorporated in it. The melodious effect of Sursringar was so overpowering that it could even outshine the veena in its vilambit alap. Thereafter, it became a tradition amongst the Rababiya gharana to play the Sursringar during the rainy season.
The instrument was well received in the world of music and became popular in a very short time in northern India.

Sursringar and surbahar, both these instruments were meant for playing the dhrupad anga alap in an elaborate manner. Sarod players used to play alap on the Sursringar before playing gat toda on sarod in the same manner as sitar players used to play on the surbahar before playing gat toda on the sitar. Therefore, it was customary to learn the Sursringar along with the sarod till the early years of the twentieth century. Gradually, when the sarod and sitar were modified and became well equipped with greater range of expressiveness, the popularity of the Sursringar and surbahar ebbed and these became obsolete in the latter half of the twentieth century.
from: http://www.india-instruments.de/instrumente/instrumentenlexikon/sursringar.html

is the popularity of sarod responsible for elbowing out sursringar from circulation, asks richa bansal unlike most other instruments in hindustani classical tradition, sursringar, which falls in the category of stringed instruments, can be dated back to a specific time. it was devised, according to traditional accounts, by the great rabab player jafar khan in or around the year 1830. organologically, a cross between rabab and surbahar but with a distinct sound and string system, sursringar is fast declining in the modern age. sursringar consists of a large semi-spherical gourd sounding box covered with wood fitted to a hollowed tapering wooden stem. the stem has a steel plate attached to it with steel and brass wires stretched across the plate. in its present form sursringar has six main strings and three subsidiary strings. it is played with a stiff wire plectrum called 'java'. the traditional style or baaz of sursringar is extremely difficult and is slowly dying out. the instrument was mainly used for playing alaap in the complex dhrupad system. it has a marvellous tone and depth of sound and is held upright like a been or sitar during a performance. pyar khan, jafar khan and bahadur sen khan were some of the great exponents of sursringar. in bengal, ustad allauddin khan, kumar birendrakishor roychwdhury, shaukat ali khan and pandit radhika mohan maitra were the noted sursringar players. trained under ustad ali akbar khan and shri dhyanesh khan, anindya banerjee is virtually the only practising exponent of sursringar in its traditional style in india today. anindya banerjee, who is originally trained in sarod, "fell in love" with sursringar when he heard a recording of ustad allauddin khan playing the instrument sometime in the 1970's. it was much later in the 80's that he decided to revive it and his ensuing efforts since then deserve high praise. "i was the first to take this instrument abroad and use it in ballet music in the dhrupad festival in uk organized by amc in 1992," said banerjee. "i have also used it in the background music of some kolkata tv serials," he added. he has even taught music in canada in 1984 and is scheduled to leave for uk in coming november. invited to various other prestigious music festivals both in india and abroad, banerjee's cd's are expected to be released fairly soon by an american as well as a french company. banerjee feels that sursringar has declined primarily since ustad allauddin khan incorporated the different styles of rabab, sarod and sursringar into sarod alone. this made sarod so versatile that gradually sursringar and rabab lost their popularity. besides, he explains that the instrument, being very large in size, poses difficulty in transportation. the sitting style of sursringar is verasan is extremely difficult to learn. lastly, it is not an easily affordable instrument priced between rs 30-50,000. "while five years is the maximum time a student requires to learn sursringar it is much easier for a sarod student to learn it," feels banerjee drawing on his own experience. anindya banerjee owns a relatively new sursringar instrument made from tunkat with its tabli recently replaced with 200-year-old teakwood. "initially sursringar was made from teak but nowadays only tunkat is used," he said. "the main maker of sursringar in kolkata today is hemen and company with instruments ranging from rs 30,000 onwards," he added. essentially a connoisseur's delight,sadly enough, sursringar is now hardly played in front of mass audiences. however, banerjee feels that with proper instruction, it will be possible to play this instrument alongside sarod and sitar on the concert stage some day. strongly maintaining that classical music still has its select audience, even banerjee could not help but agree with the fact that the quality had deteriorated immensely over the past years. and sursringar is no exception to this rule.
from: http://timesofindia.indiatimes.com/city/calcutta-times/Sursringar-Making-way-for-sarod-/articleshow/1375957068.cms

See also this note about Anindya Banerjee and a recording hopefully to get published one day:
http://www.raga.info/indian-music/musicians/Anindya-Banerjee.html

Abhimonyu Deb's wonderful collection of files are here:
http://www.mediafire.com/?stpc5rgt65o4i
Posted by Tawfiq at 11:13

Did you know? Fariduddin Dagar Saab did play surshringar... When Hemen Roy did his last surshringar it was in 98, he did not made one in 20 years, and could taught his instrument maker to make one for the future generation. (that was mine...)
Second photo of Allauddin Khan Saab is not with a surshringar bur with it ancestor, the imperial court rebab.
Warmest regards and a big Bravo for your work
Francis Tupper

Dear Francis,
nice to hear from you after all these years. Thanks for the infos and the correction regarding the second foto.
All the best

Did you record Anindya Banerjee sometime?

It's a pity we may not hear this recording sometime.

Thank you for making this recording available, your blog is a treasure trove. Keep up the good work and best wishes.

These are both really wonderful recordings, thank you so much for sharing them. Would you know the year when they were broadcast on All India Radio? thank you.

Wonderful Website. Thank you! The Nat recording has been much circulated but the Jaunpuri must be a real rarity, I know of only one other recording of Radhika Babu playing sursringar and this Jaunpuri is better.

1. Only the dark topped instrument is a sursringar. The light top over-the-shoulder instruments are both "Seni Rabab" aka Dhrupad Rabab. The remaining photo is of course a sarode. The top photo correctly identifies the player but not the instrument. There is no standardization in the form of either instrument but the following usualy applies: The seni rabab has a body of wood, the sursringar has a gourd body. The rabab has a "soundboard" of animal skin/ the sursringar has a wooden plate. The sursringar has more strings, and therefore more pegs. Even in the fuzziest photos, a Seni Rabab can be identified by the complex shape of the peghead. The bridges are of different types. The material of the strings is different, but this can't be seen in most photos. The rabab has no chikari strings (drones) whereas the sursringar does.

2. Hemen, whose name was Hemen Sen, not Hemen Roy, did not make his last sursringar in 1998. He made at least 2 more. They were made for dhrupad students in Northern California. One is in Davis, the other in Pleasanton. I know for certain that the one in Pleasanton was worked on by Hemen himself, at least partly. It was the last instrument he ever touched. He passed away before the finish was applied. Both are excellent instruments.

Dear Jody,
thank you so much for the clarifications. I hope now things are clear.

Thanks for the changes, Tawfiq. The photos are all correctly labeled now.

My Bengali is terrible, but I believe the announcement at the end of the Radhika Mohan Maitra piece recording says that it was originally broadcast on 29 March 1965 from AIR Calcutta, and is being rebroadcast as part of the station's 75 year celebrations. Since the station was commissioned in 1927, I guess that means this capture is from 2002?

(Also, Jody Stecher, who has commented above, is too modest to mention that he himself is a sursringar performer and teacher of some repute, in addition to his day job as a bluegrass musician. The two Hemen sursringars he mentions were commissioned for his students.)